Today was a work day for both of us, despite being a Saturday. Nate was doing an opening shift, which is nothing too new, but I had to go to a product launch at 10:45 .... which turned out to be a product launch that was rescheduled to 5pm. So since it was so far downtown, I made it a day for running errands downtown, doing some shopping, and, most importantly, eating some delicious food.

Since it was just about lunch time by the time we figured out we'd need to head back to the store at 5pm, Christian, the photographer, and I decided to grab some. We went to Inoteca, where we split the truffle egg toast, which is a delicious and extremely truffly Fontina-covered slice of toast ready to be soaked with egg yolks. 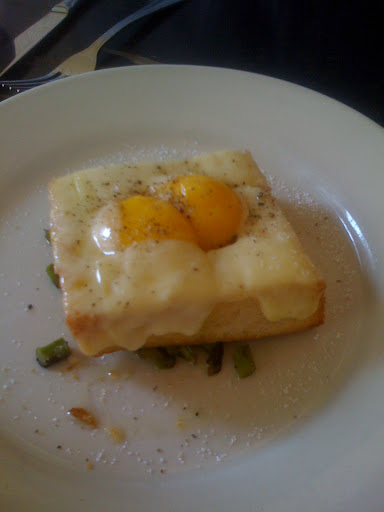 Then, continuing a trend begun with Nate's genius lasagna, I had a panini made with zucchini, ricotta and fresh mint, with a chunky tomato puree on the side. 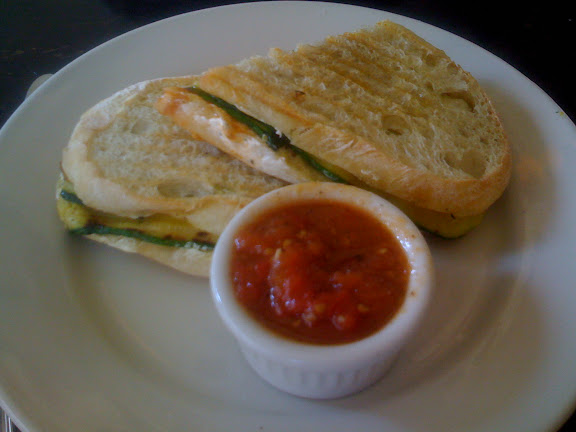 Then, because it was, after all, already 95 degrees and baking on the Lower East Side, we went to Il Laboratorio del Gelato, and let the kid serving pick the flavors (3 each). We got one cup with pink peppercorn and tarragon, dark chocolate, and coconut, and one cup with fresh Black Mission fig, mint chocolate chip and blackberry. Both combinations, while unorthodox, were fully enjoyed. The pink peppercorn and tarragon was the standout, even though I don't care that much for tarragon, generally -- it was spicy and creamy. The fresh black mission fig flavor was also great, but confusing: at first, you don't really taste much, just a generalized creaminess. Then you get hit with a flavor of, there's no way around it, dirt. And then, at the end, a wave of figginess. Bizarre. Totally bizarre -- but surprisingly yum. 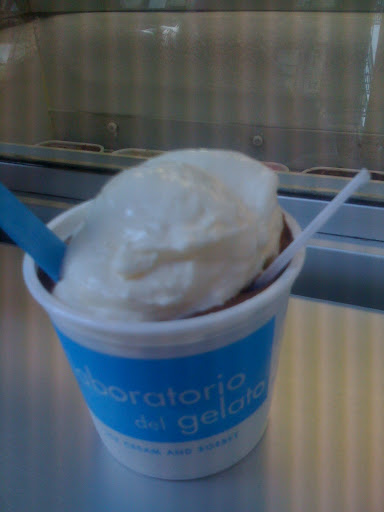 By the time I made it home from the rescheduled launch, it was go time for dinner. Since we're having some friends over tomorrow, we decided it was a prime night to clean out the fridge and make a smorgasboard-style dinner of leftovers. This also had the advantage of requiring no oven, no boiling water, no microwave and thus no use of anything, that however minorly, might contribute to adding to our A/Cs burden. For it is STILL 93 degrees in NYC right now, despite being almost 10 o'clock.

I made some bruchetta-style appetizers with the leftover bread, using a recipe that we stole then adapted from Plum Pomidor -- baguette, goat cheese, avocado and salt and pepper. Nate tossed some of the beets we got with balsamic, olive oil and s&p as well. Speaking not as a vegan but as a person with functional eyeballs, that french toast thing has got to be one of the least appeitizing things I have ever seen. Something about it screams "horror movie baby hatchery" or "inside of a Dalek".