As summer draws to a close we are faced with wrapping up the last few items from our Summer Fun List with the kids. Sure there are technically three more weeks but with the boys starting Kindergarten we are effectively in the fall, thinking about pumpkins, Halloween, and hot cider as we sweat in the ninety degree heat.

August began with a huge rainfall that had me dashing out into the yard, wading through shin-deep puddles and trying to fix our sump pump exterior drain as hail pelted me in the head and bare feet. I returned inside, soaked, and greeted by the boys who had gone into the basement and gotten as much emergency gear as they could to help me out.

Soon we found ourselves at Target buying the most insanely specific set of back to school supplies including things I had never imagined even existed such as pre-sharpened pencils. Why buy a dozen unsharpened pencils for $0.34 when you can get them sharpened for just $6.99? 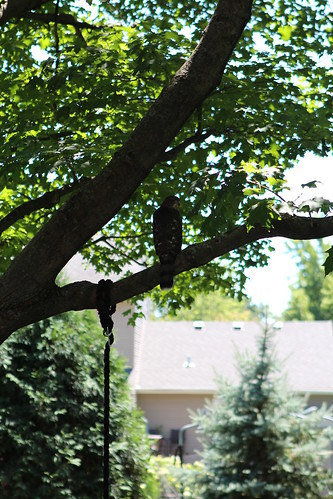 Back at home a family of Coopers Hawks (which previously I thought was just the name of a restaurant) have taken up residence in our yard. This explains why we haven't seen any rabbits this summer. That and the fact that a family of raccoons also decided to call our yard home as well. Thankfully the raccoons have been persuaded to go elsewhere before they took up residence in our attic as seems to be fairly common around here.

We also took the boys to their first baseball game with Grandad. They are still talking about it and we are still required to play baseball in the yard daily to reenact the game we saw in an alternate reality where the home team actually wins and the River Bandits lose in disgrace.

Much to Elliott's delight we also hit the paddle boats before they closed down for the season. This has not prevented them from asking about going back to the paddle boats again every day since.

We also hit some Pokemon Go raids as a group where Martin and Elliott boasted to the hordes of twenty-somethings about their impressive stable of Pokemon that they have caught.

We also went back for our annual trip to the Renaissance Fair which is always a hit. Every year the weather gets better, we stay longer, and the boys have fewer meltdowns. I'm sure this will all be for naught as soon as we bring Josie into the mix on our annual trip and all hell breaks loose.

We made it to Centennial Beach on the exact last day of the season which was nowhere near as busy as we thought it would be. We got to get a great swim in before retiring our flotation devices for the season.

Josie took extra care before we went to the beach by making sure she lathered up Baba for some fun in the sun.

Soon after Josie began her first day in her new classroom which went over very smoothly.

The boys got to attend their Kindergarten preview and set up their rooms for the school year. 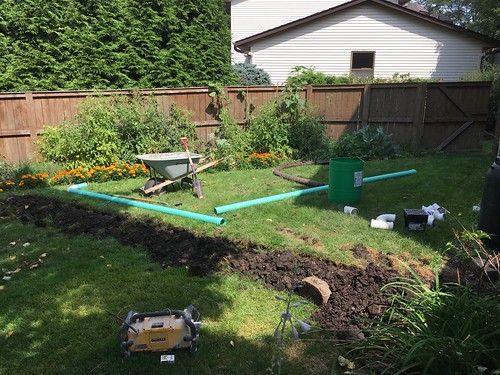 Back at home we were having a drainage system installed so that we could avoid future flooding, hail-related toe injuries, and save Martin and Elliot the trouble of haivng to suit up to assist me by running around the house screaming as I redirect pipes in the yard.

The first day of school was a huge hit. On my first day of kindergarten I was fine until a girl in my class, Chelsea, lost it and fell on the floor screaming at her mother. I remember thinking that she must know something I don't know then I became very emotional.

On the boys' first day of kindergarten I was also fine, that is until I saw the other parents sobbing and I once again wondered what they knew that I didn't and I too became emotional.

The circle is now complete.

The boys are both doing extremely well with their new pedal bikes. They picked it up right away and have gotten by with only minor crash-related injuries. I've been more concerned about what will happen if one of then careens into Josie as she gets used to her balance bike.

Jen flew out of the country for four days and I got to experience dropping off and picking up the kids from school every day which was a lot of fun. It's amazing how fast six hours goes by. It doesn't leave one with time to do very much. I can only imagine what the parents of half day kindergarteners would have done in the past.

The school organized a 5k race which went right by our house and we were able to go watch it on Saturday morning and cheer on the participants as they ran past.

After a failed nap attempt for Josie we all went to the park where the boys insisted on dressing like Mario and Luigi for unknown reasons.

They also befriended some extremely friendly middle-schoolers who were fishing.

The fishing kids were so nice and they showed all three of the kid show to fish, let them all try it, and even gave them some lures to take home as a souveneir.

When Jen was away Josie decided that she would sleep in "Daddy's Bed." This is the nest of spare duvets that I keep beside her crib when I or Jen inevitably end up sleeping in her room to get her back to sleep in the middle of the night.

On Sunday we all went to the boys' friend's house for her birthday party.

It had been planned as an outdoor party but with some raid the kids all ended up in the basement watching Moana in an amazing home theater setup. Needless to say no one complained about this, particularly the parents who all hung out in the bar which was conveniently located adjacent to the movie theater.

To make things even better it cleared up as soon as the movie was over and everyone played outside for the remainder of the party.

With summer wrapping up we gear up for fall. Elliott is already excited for his favorite holiday, Halloween. Martin is ready for colder weather which is more conducive to playing hockey. Josie, she's just ready to wreak havoc in yet another season.
Posted by Unknown at 10:10 PM 1 comment: