When in the basement cleaning up Martin came across Jen's old "yoga map" that she was going to discard. Martin would have none of it and immediately commandeered it.

He then showed us a number of yoga poses that Aunt Lauren had taught him including the popular move, "down dog." 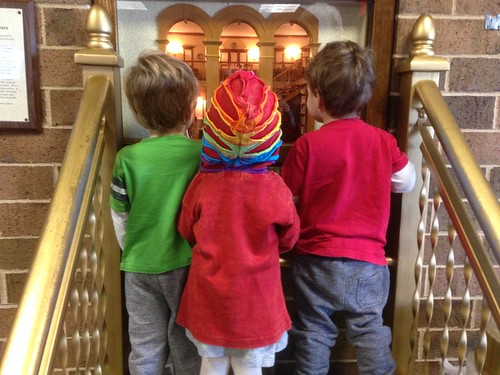 We also took a trip downtown to the library, river walk, and eventually had lunch before returning home to nap. 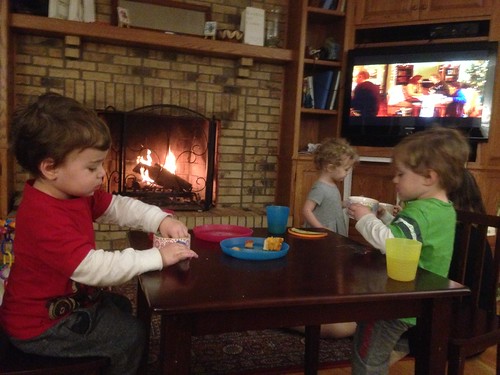 We have a pretty strict practice of not starting Christmas music, movies, or decorating until after Thanksgiving. However, this year was special with friends visiting and a sudden cold snap. We decided to have our first fire of the season and play Elf for the kids. Even though it was a little premature it was nice to spend a portion of the forced holiday with old friends. 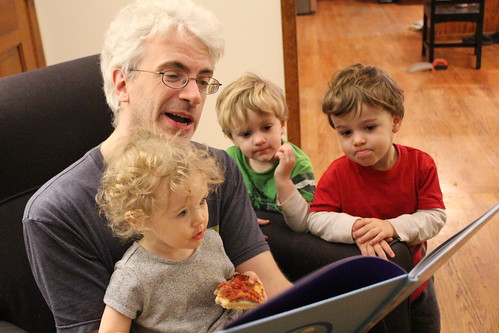 Uncle Paul entertained with many read books which all the kids enjoyed immensely. 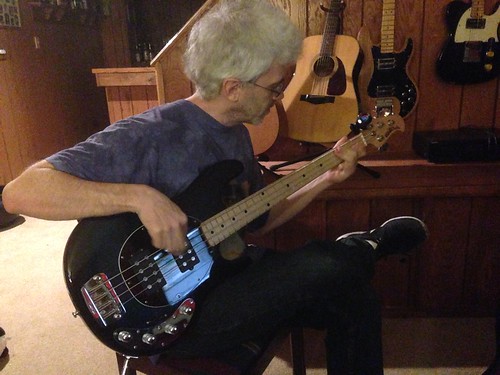 When the kids were napping Paul finally got around to putting down a bass track to a song we initially recorded in 1998. Our band, Spruce Avenue Jam was known as "the earliest band in rock" because the only studio time we could get was at 6:00 AM. However, our struggle to complete this album has taken the better part of twenty years. Now we are one step closer to getting this one in the bag.

Look for it available for free download sometime in 2020. 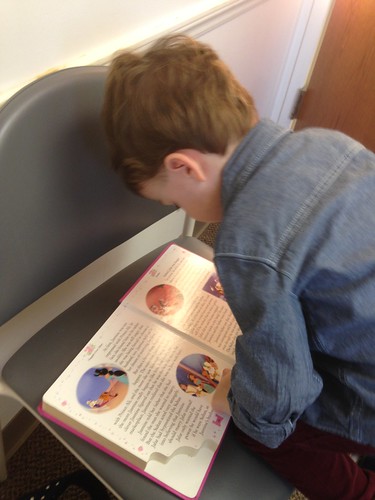 Martin and Elliott were both battling ear infections leading up to the visit. Elliott had mostly kicked his and had almost finished his antibiotics before Martin developed a fever and screamed himself to sleep one night. We took him to the doctor where we had to wait 45 minutes alone in the room waiting for the doctor. The boys could not have been better behaved. Martin played with toys and Elliott read a book the entire time. I think they dealt with the wait more maturely than Jen and I did. 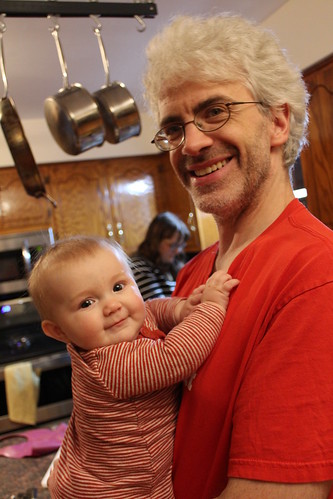 After a few days off Caolan, Paul, and Jane returned and Josie had a reprise of some sweet Uncle Paul snuggles which she really enjoyed during the visit. 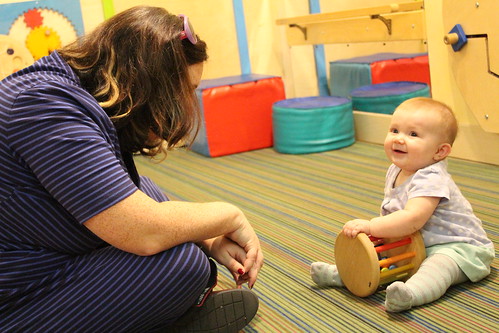 We took the kids to the newly reopened children's museum where they had a blast and Caolan played with Josie in the baby area. We took turns trying to manage three easily-distracted toddlers throughout the establishment.

Sadly, after and on-and-off week, it had to come to an end and we had to say goodbye. While we used to see each other all the time our visits these days are few and far between. Usually they are also short so it was great to be able to spend numerous days with some great friends. We're really looking forward to the next time we can do this again. 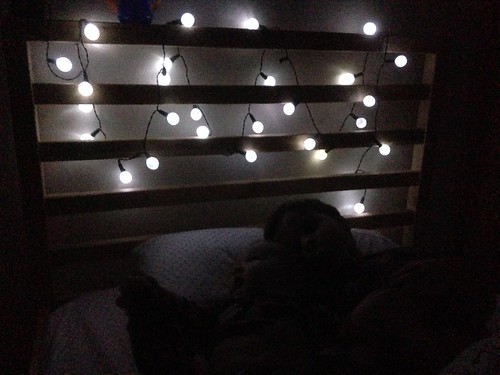 The boys have been agitating for more reading time at night so Jen cleverly rigged up these Christmas lights on their beds so they could read by them. This has bought us a little more sanity at night for bedtime and you cannot put a cost on that.

Josephine continues to try new foods. The other day she tried her first carrots.

After her first bite she began to search out an exit route.

The other day I took Martin Christmas shopping for Elliott and Josephine, a concept that was sort of lost on him. It was his first time in a toy store and he handled it better than I'd expected, but still ended up just giving the mask he'd picked out for Elliott as soon as he got home.

Jen had better luck with Elliott but he still blurted out what he'd gotten Martin for Christmas the second he walked in the door.

The boys agreed to help me, once again, hang the Christmas lights. With the biggest November snowstorm to hit Chicago in 120 years we had to act fast. I foolishly hung lights across the top of the house and set up Santa and Frosty which Elliott alternately hugged and proclaimed his love for and dismembered. 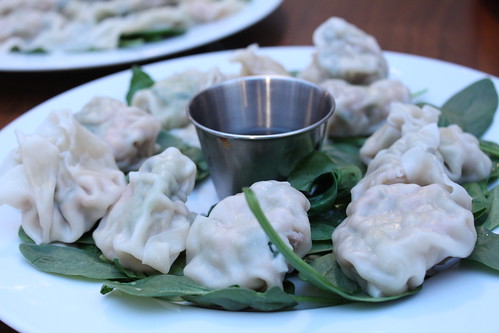 Jen made a huge batch of dumplings. Martin talked a lot about how they were just meatballs in a wrapper as his toddler brain tried to process what this new food was.

During the messy snowstorm we took the kids to the mall for a harrowing photo shoot. We were reminded why we haven't done this in a while. The kids were great and well behaved but they reached their limit quickly and the photo shoot lasted far longer than we'd hoped so we ended up racing home to try to have a late dinner with three children who were at the end of their rope and one baby who didn't really care either way.

It doesn't sound it but that should be easier.
Posted by Unknown at 10:41 PM No comments:

Jen left town for a couple of days to visit family in Canada. I was left alone with the boys and, I feel guilty saying I got the best sleep I've gotten since Josie was born. The first morning they were gone I woke up at 6:00 AM feeling better than I've felt since I was a teenager. 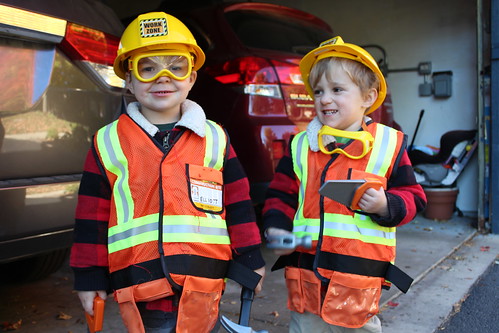 While I missed Josie and her sweet smiles, it was incredible how easy it was only taking care of the two boys. I got them some construction worker costumes to wear while they play construction. Construction usually just consists of them dragging all the spare lumber out of the garage and piling it up in the driveway. They told the neighborhood girls that they were building a house for children that didn't have one. That sounds nice until you see the quality of house they build. Shoddy craftsmanship. 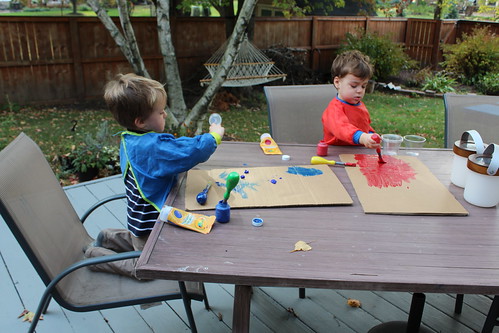 When Jen got back she worked at painting their shields for their Halloween costume. 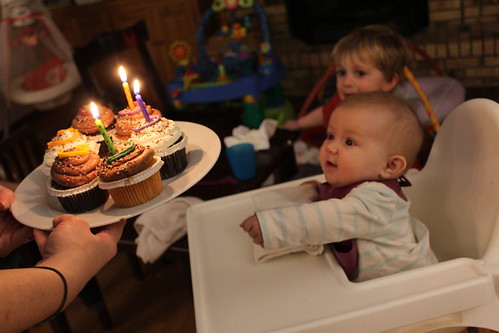 Josephine turned six months old so we had some cupcakes to celebrate. The boys were delighted, Josephine was as annoyed as she is every time we eat something in front of her that she would like to partake in. This girl is ready for some cupcakes. 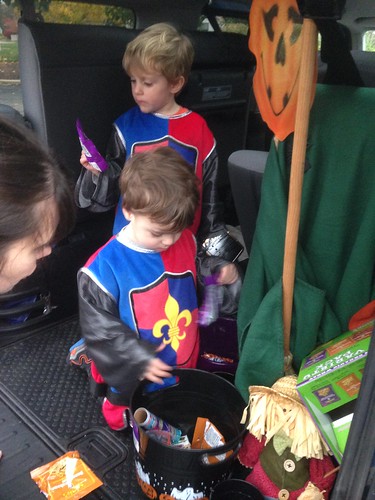 Trunk or Treat was a bit of a bust this year. It ended very early, about five minutes after I arrived. I didn't even get a chance to take a picture of my trunk but I did take this picture of Martin and Elliott in Auntie Lauren's trunk before getting in my car and driving home. 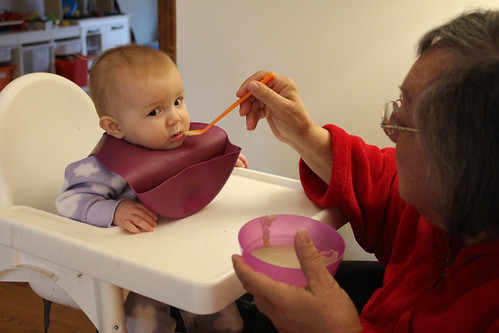 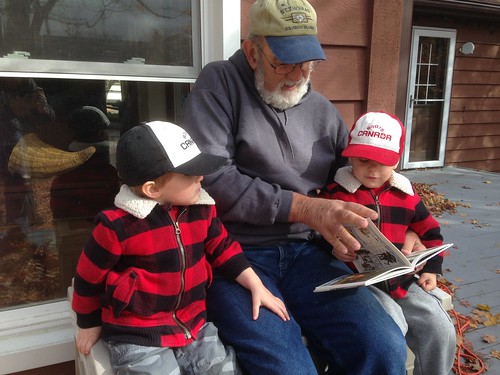 We have wrapped up October and begun November with some incredible weather. Even on some of the cooler days we've played outside. Grandpa worked for hours on the frustrating task of getting the boys dressed to play in the yard. In the end they just wanted him to read them a book outside. 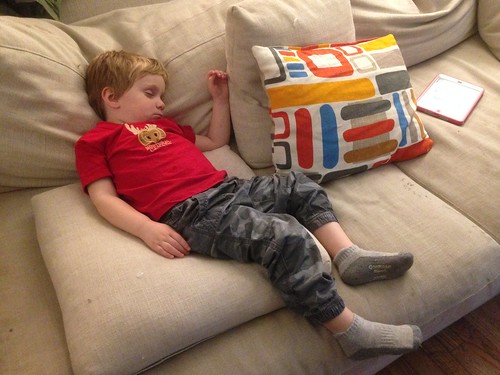 Later Martin fell asleep on Nana while she was reading to him. This is completely out of character. Then he slept on the couch and no amount of shaking or movement could wake him.

There is no precedent for this. This kid never wants to sleep. 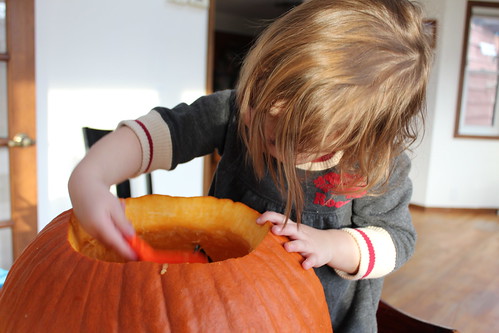 I tried to get the boys involved in carving the pumpkin but they had exactly zero interest in doing this. In the end Evelyn ended up helping me scoop and was the only child with any sort of interest at all in making a jack-o'-lantern. This undoubtedly foreshadows future Halloweens when the boys are just a little too old and I'm still trying to push holiday traditions on them.

At least I got a taste of the rejection early so I know how it will feel.

We went to Grandma and Grandad's to trick or treat for a bit before heading back to our neighborhood.

There was a house on our street with a giant animatronic spider that would jump out at trick or treaters as they approached. The boys were startled by this. For Evelyn it was the end of her Halloween and we had to meet her back at home after finishing up the block with just the boys.


Then Elliott gave a dramatic retelling of what happened to my father. In the retelling he downplayed his own fright at the spider. 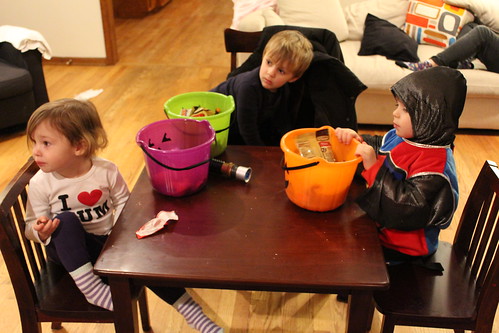 The weather was lousy, cold, and rainy but it was far better than last year where it took everything we had to make it through three houses. 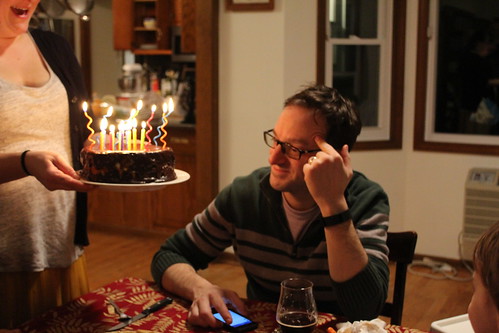 The following night we had a nice birthday celebration for me complete with cake and pumpkin pie.

Immediately following this everyone started getting sick. First Elliott, then Josephine, then me and Jen. Martin was the last hold out but he too gave in to coughs, fever, and general lethargy.

Upcoming we have our first visit in Illinois from Caolan, Paul, and Jane and everyone is looking forward to it. The doctor says the boys aren't contagious any longer as we all just recover to get over the lingering cough.

Now we're just hoping we don't spread the joy of this virus to the rest of the world.
Posted by Unknown at 1:41 PM No comments: