Late June and Early July saw us entertaining a large assortment of house guests, probably a record for any 3-4 week stretch in the past. This was great. When we moved here in 2013 we had this idea that we would buy a house with a nice guest room and be constantly having people over for nice meals. In reality I don't know if either of us really believed that would ever happen but here we are nearly four years later having had dozens and of stays in our guest room and it has been great.

Our friend Heather was the first to stay with her son Declan. We all took a trip to the Shedd Aquarium where they had a blast not remembering much from our previous trip.

AFter the trip we had a photo shoot with the kids outside the aquarium.

We also took the boys on some continued Pokemon hunts which always entertain them though they generally get too involved in the game and sometimes nearly get hit by bicycles. Josie has no idea what they are up but enjoys the trips nonetheless.

Usually Martin always finds someone with a dog that he asks to pet. Elliott takes advantage of Martin's gregarious nature and gets to pet the dogs too but usually hides behind my legs until Martin has done a few minutes of ice-breaking with the stranger.

On Jen's birthday we took the kids to a family farm with a butterfly pavilion, hiking path, and play area.

We had cousins Evelyn and Oliver along as well for the ride.

They were super happy to enjoy the play area which defied all expectations.

As we hiked down to the water the kids went rogue and Evelyn ended up losing her shoe in the mud which lead to her being less than thrilled and eventually getting washed off in a water fountain.

Martin, for some forgotten reason, got cranky about something but failed to see how his mood could not be taken seriously as he had chosen to wear a pink basket on his head. 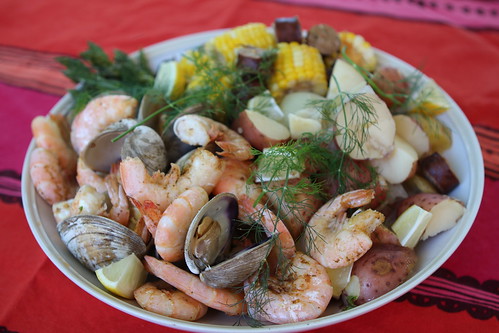 For Jen's dinner we made a shrimp boil along with cheese spread for the birthday girl. 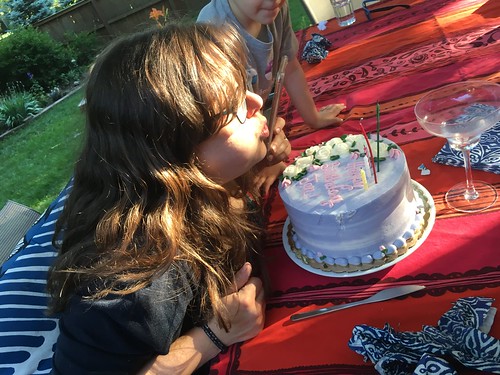 Hopefully Jen had as much fun on her birthday as she gave her children over the course of the day.

On a Saturday morning there was a Pokemon Raid in the park by our house. I took the boys where we battled and they both got a chance to catch the Raid Boss. We usually have mixed results with that so a lot of mental preparation needs to go into getting them to accept that the boss bay flee.

During the raid Martin met a fellow Mystic team player and he gave him some pointers on the finer points of gym battling.

Our next guests were Matt, Rene, and their two children. The last time we all hung out was in France in 2011 before any of us had any children. The visit this time gave us a little less time to focus on adult conversation but it was still a lot of fun. 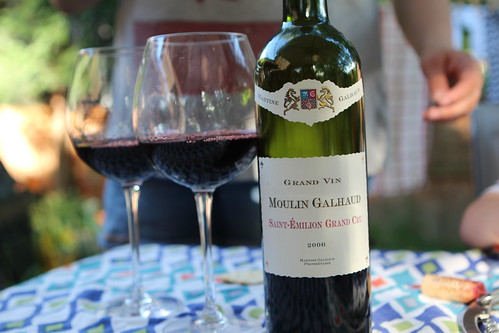 They brought with them one of the bottles of wine they'd purchased in Bourdeaux during our road trip together. It was one of the most thoughtful and nice gifts they could have brought and the wine survived the years and the trip beautifully. 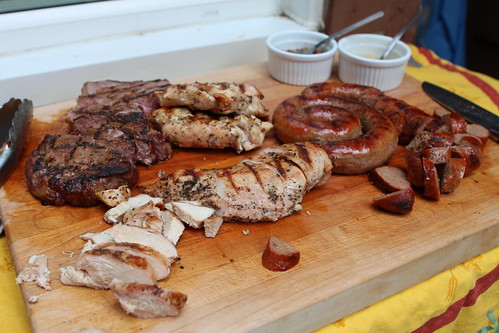 For dinner I made a mixed grill with chicken, ribeye, and some amazing Italian sausage made by a friend of mine. The sausage was a late addition as it had been given to me unexpectedly that day. I thought making it would be overkill but there was next to nothing left.

On July 4th we took them to see the fireworks and, for the second year in a row, they passed out in the car on the ride home and it made for an easy but rare car-to-bed transfer.

A couple of days later Nana and Grandpa arrived ahead of the boys' birthday. Nana was ready to entertain the boys with some art lessons.

Grandpa got to work replacing some boards on the deck which he never would have been able to do without Martin's extraordinary hammering abilities.

For the first time we ended up having a party for the boys' friends at school. Since about 70% of their classmates also celebrate July birthdays we got ahead of it this year by sending out invitations in April.

This year's cakes (by request) were Wild Kratts and Paw Patrol themed.

They got a lot of great gifts and celebrated by transforming into the Wild Kratts. Elliott even insists that his name is Chris some of the time. Go creature power!

They also got their first pedal bikes. They were very excited about this but then, when they learned that they could not instantly ride them at expert level, they lost a bit of interest.

The next Day Evelyn celebrated her birthday with friends and there was an epic soccer game which was extremely well organized as it was played by four and five-year-olds.

Both boys took to their maternal grandfather roots and insisted on playing goalie.

The boys also got cameras for their birthday. Elliott loves taking pictures. Unfortunately he also loves video games which, for some reason, the cameras have. After a brief photoshoot in the yard Elliott could be found on the couch playing Arkanoid on his camera for the next half hour. 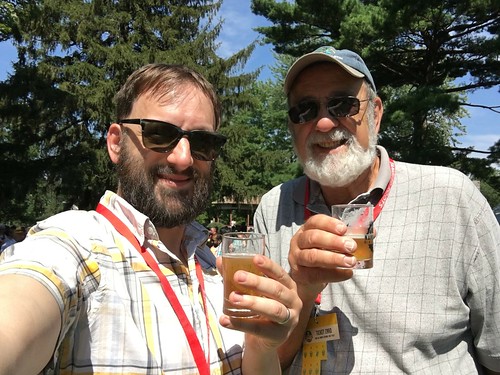 Grandpa and me also got to take our fourth annual trip to the Naperville Alefest, and possibly our best. The weather was beautiful, we brought chairs, and found a great spot under a shady tree where we enjoyed a number of tasty local beers and delicious lobster rolls.

The next day it was time to say goodbye to Nana and Grandpa and embark on our journey to Wisconsin for the start of our family vacation. The trip took about an hour longer than planned due to road closures from flooding. We got to dive through some completely flooded neighborhoods which brought back some bad memories for Jen and I.

We got to Timber Ridge just before dinner and spent a good amount of time swimming up an appetite.

We learned our lesson from last year. While the room and swimming is top notch the food was pretty sub par and very overpriced. Instead we went grocery shopping and I made elbows with marinara sauce for the five children and three adults. Total cost: $3.00.

The next day we spent hours in the pool before and after lunch. The boys were able to get their own life jackets which gave them a freedom they hadn't previously experienced.

After the morning swim the boys took to the deck where Elliott enjoyed a casual lunch.

Overall the kids had a blast and we look forward to returning again, maybe even during the winter months.

We also took advantage of twilight swim at the nearby pool. The term "twilight swim" sounds a bit more magical than it actually is. Since it runs from about 6:00pm to 8:00pm in July it just seems like any normal swim given that the sun is out the entire time. The only difference is that the kids don't realize how late it actually is and become disoriented when you tell them they have to go to bed as soon as they get home. 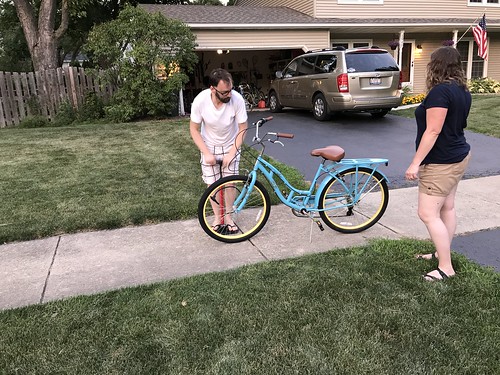 On the way back from the swim we stopped off at a house where Jen bought an extremely reasonably priced bike and I rode it home for her since she doesn't like riding a bike in sandals. I hope she liked riding home in a car full of screaming children. My ride home was as peaceful as could be.

The next day we headed to the Museum of Science and Industry to meet with Jen's childhood friend and her family. Elliott waited patiently in line behind three other children for a chance to play this game where you navigate a tractor around a map harvesting wheat. Since it was a video game he sniffed it out within moments of entering the museum.

Martin had a great time dropping the trucks down inclines lined with different materials and guessing which would reach the bottom first.

After the visit Josie was unconcsiouc before we even left the parking lot. She ended up sleeping most of the way to Kalamazoo.

Our first stop in Kalamazoo was the same as our last stop on our previous visit, and for good reason. One Well Brewing is possibly the best restaurant and brewery you can visit with kids.

The boys got to play video games.

Josie got to play pinball and watch Moana all while we got a chance to eat dinner, have a few beers, and enjoy the company of Auntie Lisa and Uncle Adam.

When we got to the hotel the boys were thrilled about getting bunk beds.

Josie had a horrible night so I took her out really early with Martin and the three of us had breakfast while Mummy and Elliott got an extra hour or so of sleep.

We took the kids back to the Kalamazoo Air Zoo, the sleeper hit of our 2016 road trip. There they spent most of the time riding rides. Unfortunately we had to go on with them for some of them. Spinning in circles just doesn't quite hold the same charm these days that it did as a child. 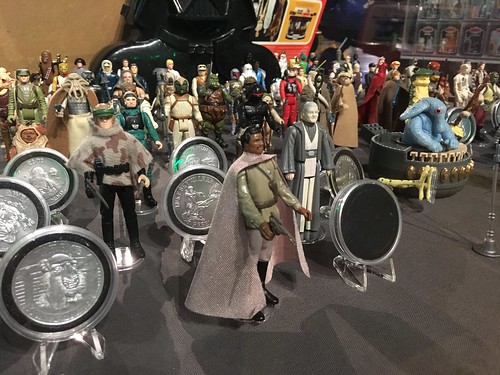 While they enjoyed the rides I really enjoyed their new exhibit of Star Wars action figures. Seeing them in their original packaging was incredible. They were under glass so people wouldn't steal them and sell them for money. I would have been more interested in opening them up and playing with them.

On our way back home we stopped by a place that had metal dinosaurs, made homemade donuts, and had a farmstand.

Josie refused to participate in any of the photos as she thought the dinosaurs were a little scary and she was extremely suspicious of the peach which also looked like a giant butt from the back.

When we returned home I took the kids to the sports supply store and bought them hockey sticks as their old tiny sticks were just a bit too small.

Martin is obssessed with being a goalie. Sometimes he'll be sulking over in the corner of the room. When you ask him what's wrong he says, "I'll never be a goalie! What if I can't stop every shot!" I'm not convinced that's the best temperment for a goalie but it's probably what goes on in the minds of every serious goalie out there.

On one of the hottest and most humid day of the summer so far Martin decided to dress up in his Spider-Man costume (over his regular clothes) and shoot the puck. I went out to see how he was doing. He was dripping with sweat but he was committed. "Is your team the Spidermen?"

Eventually I coaxed him back inside as I was a little worried he would collapse from heat exhaustion.

There is very little that can keep him from playing hockey nonstop these days. I'm wondering if this will just be a phase or if the money we save from them leaving daycare is now merely going to be funneled into expensive hockey equipment.

Of course, unless he becomes an entire NHL team we are probably safe.