Summer is Up On Us

The late spring brought with it its normal difficult-to-predict pattern of beautiful days in the low 70s immediately followed by sweltering days in the mid 90s. The constant bebopping between the two has left us alternately feeling fine, suddenly feeling like we're coming down with the flu, then feeling fine again the next day. This is a phenomenon I don't recall from childhood, or even early adulthood. Along with mysterious aches and pains, sore feet, thumb pain, and throbbing shoulders this is just another marvel as we enter the beginning of middle age.

The hot days have resulted in some fun water days. Elliott has taken advantage of completely loading his water blaster and unloading it on Josephine point blank. Surprisingly this has been met with far more glee by Josephine than I would have predicted.

As the boys become more into eating at the counter they have also been enjoying spending the morning coloring or drawing before school as they continue to make insane breakfast demands. Elliott asks for cereal every day. Martin is more ambiguous saying he wants to "have something I've never had before." Also, sometimes, he just asks for a plate of raw carrots. I called what I thought was his bluff and served him up a plate just to watch him eat the entire thing.

As Josie gets closer and closer to actually walking the boys are still extremely nice to her, although sometimes a bit rough.

One day while I was at work Jen took 30 minutes to set up art supplies for al three of them.

This, of course, meant that they painted for about five minutes before they got bored.

We took them all to the Cavalcade of Planes again this year. Last year's was cancelled so they were very excited to go. They've been regurlarly referring to the "jerks" for the past year. We were excited to not have to console our crying children after a last minute cancellation.

I took Josie with me to the music store and she looked at the Rickenbacker guitars nearly as longingly as I have for the past twenty years.

Josie has taken to her play pen much better now that it's outside and she can stand up. She was not a fan of being in the play pen when it was inside this winter. Generally she's not a fan of anything that breaks her direct sightline to mummy.

The boys have been excited to watch the wild prairie grasses grow while dodging bees on our walk to school in the morning. Their mother has been excited to chastise me for my deep hatred of the prairie each morning as well.

What can I say? It's one of my least favorite types of terrain! 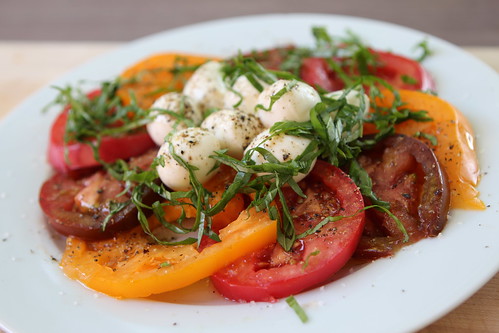 June greeted us with our first delicious heirloom tomatoes of the season and even Elliott, recent tomato hater, has even admitted that tomatoes are delicious again. I suspect that he is suffering through what I suffered through as a young child. I think he just likes delicious seasonal tomatoes and doesn't think tomatoes out of season are worth it. You have to respect him for that.

We took a fun drive out to Starved Rock and took a family hike. After being there for 45 minutes we hadn't gotten more than one hundred feet from our cars. It's a little demoralizing when you drive an hour to go for a beautiful nature hike and after another hour are still within sight of your vehicle.

At one point it became clear that Uncle Doug was likely going to throw one or all of the children (and potentially himself) into a canyon. Then, miraculously all the children rallied and everyone did great. It was a beautiful 70 degree day sandwiched between two phenomenally hot and humid days and it couldn't have gone better. Aside from the occasional proclamation of "I can't walk" or "I think my legs are broken" the kids had an amazing day.

I suddenly became very ill for about 24 hours but, unfortunately, I had promised the children I'd take them to the Splash Pad for the first time this season. They had a blast but I mostly just squinted in the shade before going home to take a three-and-a-half hour recovery nap.

On Father's Day I took the boys to The Sports Authority to take advantage of their Going Out of Business Sale. I didn't really find the deep discounts I was expecting. It seemed more like a We're Actually Trying to Stay in Business Sale and Are Having a Really Small Sale Sale. Regardless, the boys had the time of their life trying on football helmets and boxing gloves. I then took them to Target where we got a baseball glove for $80 cheaper than the sale price as well as two bats to use for their tee since they have broken all their bats by pretending to fight a dragon (read: tree) in the back yard. 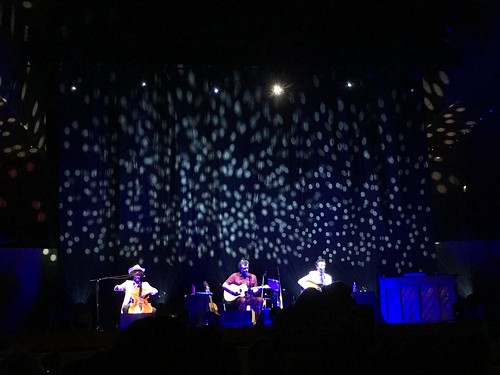 After an amazing Father's Day we went downtown to see Flight of the Conchords in what was one of the best shows we've ever seen. It was sad to not spend the last hour or two with the kids but great to see this once in a lifetime event. The only other time we ever attempted to go to a concert since moving here was to see Stevie Wonder and had to cancel when Jen got really sick. It looked like illness was going to intervene again this time as our childcare option fell ill but we were miraculously saved by a last minute baby sitter.

It's going to be great to go see another concert in three years.
Posted by Unknown at 3:31 PM No comments: