We're rounding out about six or seven weeks of illness, mostly with poor Josephine. We just started her on a second round of antibiotics which, after four days, have kicked in enough so that we got our best sleep in over a month last night. This means she only woke up to comfort nurse twice and then went back to sleep relatively easily.

Martin and Elliott kicked their illnesses very quickly and have taken to preparing elaborate feasts. When they are really mad with each other (or their dear parents) they angrily proclaim, "You cannot come to my feast!"

This has replaced, "You cannot come to my birthday!" as their number one insult/threat. They're so cross when they say it that their lips quiver and their voices tremble.

This is serious business.

We made pizza cones one night, something we were conned into buying at a school fundraiser. It went over pretty well but thankfully they have not requested a reprise as we do not have the supplies to ever duplicate this again.

As a special treat one night I brought homea cherry pie. Martin ate his happily.

Elliott had a bite then just ate his ice cream. When I asked if he was going to eat any more he said, "No thank you. It's not delicious enough."

This beats the other night when I came home from work with Chinese food. This was the first time I have ever picked up food on the way home from work. They both cried and screamed and refused to eat dinner then had tantrums when it was announced that they could not have dessert.

I will never try to do anything nice or spontaneous for them ever again.

A certain ice cream shop opened up for the season and was giving away free cones so we took a trip after dinner. The boys were extremely gregarious that evening. Martin was his normal level of gregarious while Elliott as at near-Martin levels which is much less common for him.

They burst onto the sidewalk where people were eating their ice cream and Elliott announced, "Hi! We're twins!"

Josephine had what may have been her first ice cream and was not disappointed with the results.

For St. Patrick's Day we made shepherd's pie. Josephine ate about six times as much as her brothers but the pictures are far too graphic to share.

Martin chugged the green milkshake I made for him.

Elliott had a much more conservative approach and savored the milkshake.

The following weekend we attended the most big league pancake breakfast the world has ever seen. There was a full brass band, carnival games, face painting, and a man dressed as a bear.

Josephine was extremely excited about her first pancake breakfast as we did not bring her along to the last one we attended.

Elliott made short work of his pancakes so he could knock down cans at point blank range.

Martin made a beeline for the face painting station where he demanded a Spider-Man mask even though we had to wash it off twenty minutes later for swim class.

Josie's 11 month birthday came up and we celebrated with cupcakes.


Josie also celebrated with an enthusiastic round of ankle twirls.

This was followed by grandma's birthday and celebratory croissants which Josie ate off the floor, the way she gets most of her sustenance.

In fact I even found that Josie has been stashing all of her droppings in this watering can, presumably for safe keeping.


Josie has also taken to playing ball and gets extremely rambunctious as she rolls it back to you.

On Sunday, after we used our St. Patrick's Day leftovers to make Reubens, the children ran amok and Lauren was able to capture this, the first picture of all five cousins together.

While it's not the best composed photo ever taken it does present a particularly true representation about what getting the five of them together is like these days.

Better photos of the five may happen, but a more accurate picture may never be taken.
Posted by Unknown at 2:34 PM No comments:

February brought on the most sickness we've had to deal with in at least a year. Croup swept through the family with Martin and Josephine getting it twice. Elliot, Mummy, and Daddy were fortunate enough to only each come down with croup once.

Before the croup was to infect our home we were able to celebrate Chinese New Year with Josie enjoying her first ever pork dumplings. 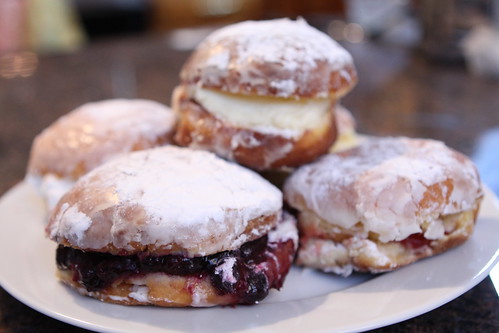 The following night we had Mardi Gras breakfast for dinner followed by paczki which surprisingly the boys did not seem to enjoy as much as I would have expected considering they are the most delicious pastry I've ever consumed in my life.

Before falling sick herself Josie was on the move, inching closer every day to crawling. She has also had a great time playing the piano with me on my days off.


The boys have continued to expand their love of Hamilton with impromptu performances of new songs. Here they are singing a slowed down, soul version of "The Schuyler Sisters."

Martin eventually developed a fever of 103 and was so miserable that I had to take him out for a walk in the freezing cold air to help his lungs. It worked well but you could tell he was sick because he was silent for our entire 45 minute walk where normally he would have spent the entire time telling me about the Teenage Mutant Ninja Turtles. He managed to put on a great fake smile for me when I came around to see how he was doing. His hat was completely covering his face but he was too sick and tired to even bother asking me to remove it.

On Valentine's Day Jen set up some great breakfast tables for the kids while I was at work. That night we had dinner with the family.

Soon after that Josephine got sick and while she spends most of her days laughing and smiling she was a wreck. There was little or no sleeping or napping while she fought a fever that got up to 104 one night despite our intense regimen of alternating ibuprofen and acetaminophen.

After a few days everyone shook off the last round of croup and were able to play inside to build a bear cave on the freezing cold days.

Josie's mobility increased every day. We wouldn't see her do anything but when we would check back she'd be across the room.

The kids had a "Noodles and Doodles" night at school where we ate immense amounts of spaghetti and I got to make a macaroni necklace for the first time in over thirty years.

With Josie moving about I brought up the boys' old play center from the basement. Unfortunately she was evicted from it immediately and they set it up as a jail where Batman could put bad guys, something they had previously only been able to enjoy in the basement.


Josie has had tons of new foods including pancakes, waffles, strawberries, grapes, and oranges. All of that has paled in comparison to her first go at some chocolate brownies at Auntie Lauren's house. 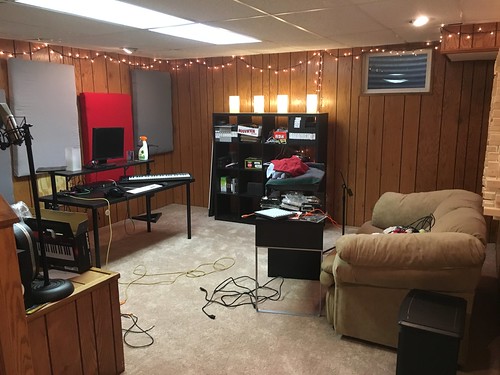 We were able to get a small portion of the basement carpeted again after our December sump pump flood. This has been just enough for me to set up the music studio again for the boys to play. One day I may even get to use it again. It is a huge relief to have this back up and running.

Elliot has spent a lot of time playing the trombone and violin.

Martin has mostly focused on his guitar and keyboard chops.


And, finally, a couple of nights ago Josie made her first real crawl across the floor, beating her brother Elliott's record by almost a month. As I write this she has made tremendous progress and now can crawl extremely quickly. With her brothers this was a pivotal moment in our lives getting harder. I fear that the ease of having three children has just been washed away.