October has greeted us with lots of joy and practically no sleep. Apparently we had suppressed the memory of the five month sleep regression and were blissfully unprepared for it on the second time around. That's when Josephine decided she would only sleep for one hour blocks in the night and that most nights would begin not see us getting to sleep until midnight after Jen took her into the other room to rock her to sleep.

Mornings would begin around 4:00 AM with me bringing the baby downstairs to push her around our downstairs in her stroller. Luckily we are not in our New York apartment or those trips in the stroller would have been considerably shorter. 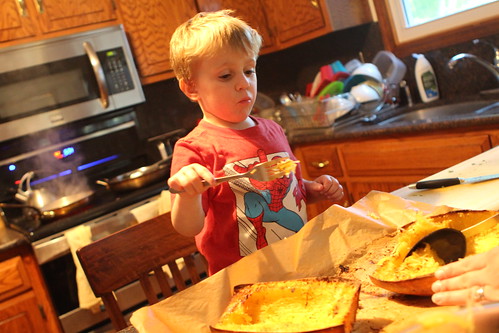 We got some spaghetti squash from the farm and the boys warmed up to the concept more quickly than I would have thought. 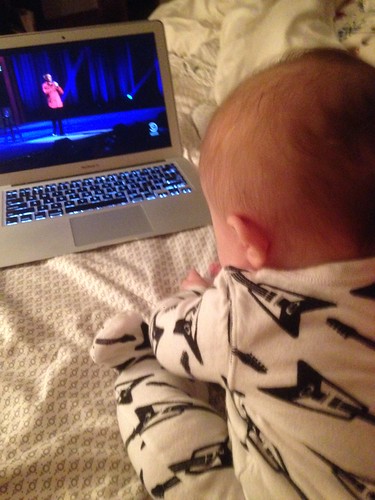 In a miracle I was able to watch Brian Regan's live show with Josephine after getting the boys to settle down to bed about ninety seconds before it started. She didn't laugh as much as I would have thought but she did seem captivated throughout the special. 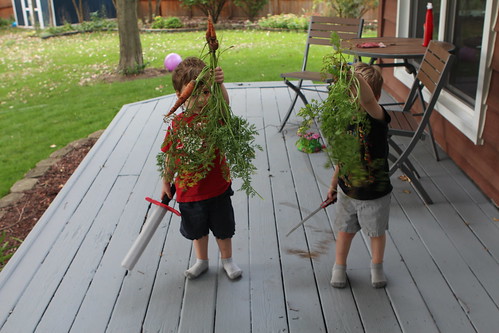 The boys helped Jen harvest from the garden. We now have huge bags of dirty multicolored carrots filling our fridge. 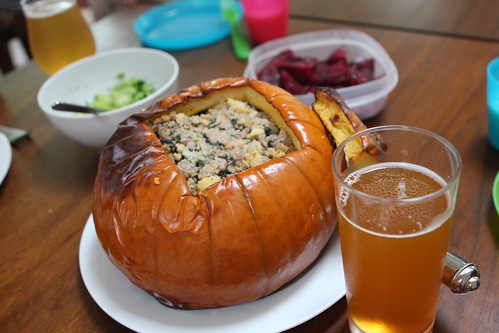 Jen made a stuffed pumpkin on one of the last days of September so the boys were able to enjoy a little taste of the fall early on. 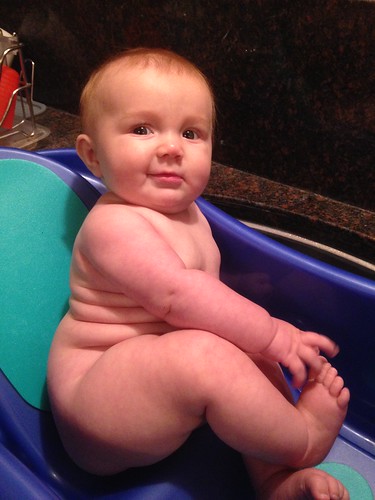 I turned the leftover pumpkin into a creamy pasta sauce for some tortellini which also went over well. 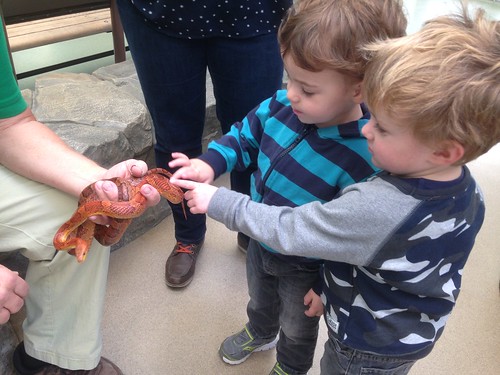 We were able to take our third trip to the Brookfield Zoo since getting our membership, thus making the membership pay off financially.

We spend the entire time at the children's play zoo where, among other things, Elliott was able to call the zoo director from a phone. 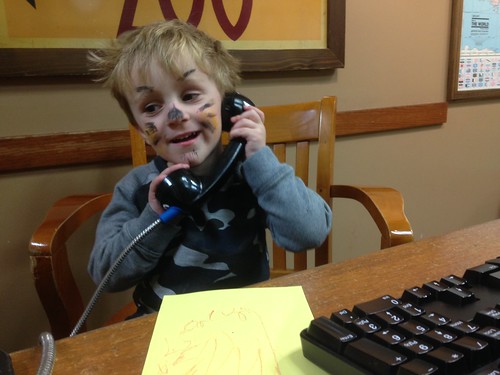 Martin got to be the zoo director which was a very popular activity.

They also got to put on lemur costumes and crawl around. They also were able to use their tails as swords and sword fight in the way that is common to the North American lemur. 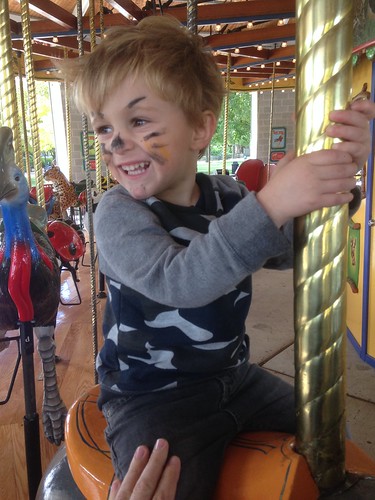 We were also able to return to the carousel for the ride I promised them earlier in the summer before their meltdowns on our first trip of the year. Martin gleefully picked the elephant. 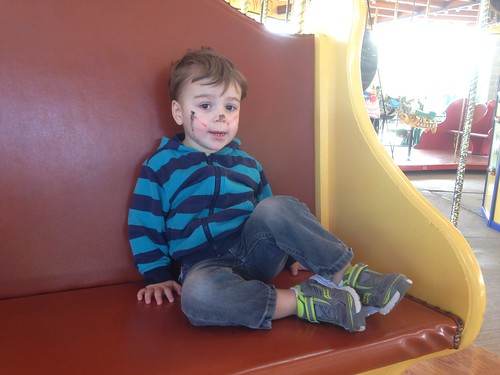 Elliott, on the other hand, picked the bench seat.


They have been regularly playing "Wesley" and rolling down the hill on our way home from daycare. Martin usually rolls down the hill and loses his mask. Then Elliott runs, leaps in the air, and lands on Martin's ribs with his knees. Surprisingly Martin finds this just as funny as Elliott does. 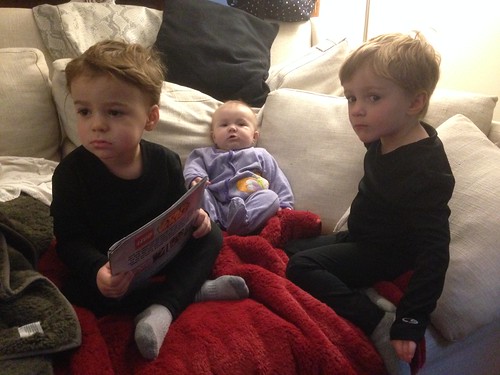 Every morning opportunity I wake up the boys around 7:00 AM, after being awake with Josephine for at least two or three hours, and we very quietly go downstairs and watch Saturday Morning Cartoons. 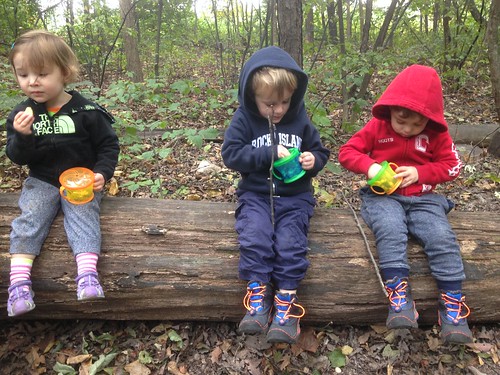 After one such morning we went for a hike in the woods with Auntie Lauren, Uncle Doug, and Evelyn. 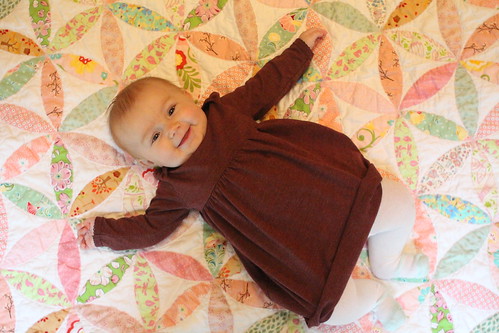 Josephine got a beautiful quilt in the mail from our other Canadian extended family in Toronto. Lynn made her this beautiful quilt. The boys received approximately thirty five quilts so this is one of only two personalized quilts that Josephine has. Josephine doesn't mind but Jen and I are particularly happy about it.

Then, of course, another stomach virus ravaged our family. We suspect it to be a mutated version of what we had earlier since Jen and I were spared. When Evelyn recovered Lauren and Doug were knocked down and we watched Evelyn for the evening before bed so they could recover. 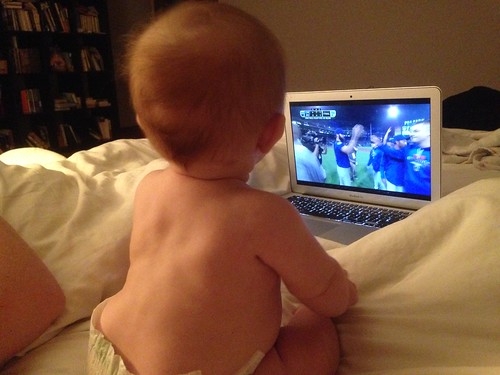 Josephine, while not sleeping, also got a chance to watch the Cubs clinch their playoff spot. This has been a highlight of her life so far. She's super jazzed about the Cubs. 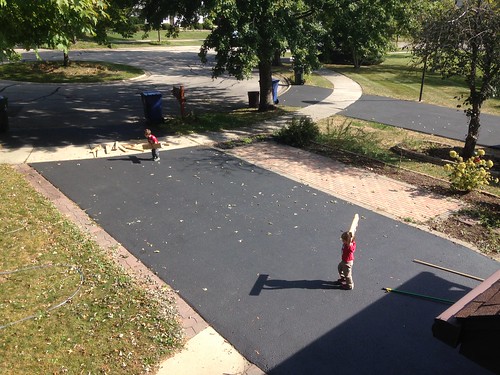 The boys have enjoyed doing "construction" a lot lately. Construction consists of them dragging all the loose wood and boards out of the garage and putting it into a giant pile in the driveway. It's hard to be too upset about it because Martin informed me that they were building a house for all the children that didn't have houses.

Some girls that live in the neighborhood rode over and observed this humanitarian project in action. Martin was more than happy to tell them about it, talking a mile a minute, while Elliott continued to pile the wood higher and higher. Then Elliott came over and told them that their bike helmets were very beautiful.

The boys have game. 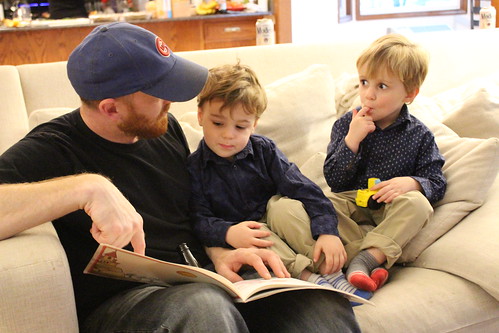 Auntie Lisa and Uncle Adam came over for Canadian Thanksgiving. The boys hadn't seen Adam since Christmas and were really impressed with how cool he was. They enjoyed watching baseball with him and, of course, sword fighting. 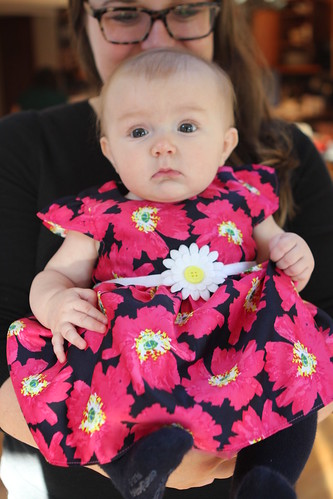 Canadian Thanksgiving took a different approach this year, focusing on a nearly vegan meal. Everything was vegan . . . 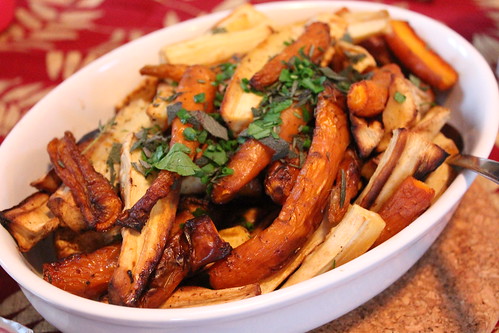 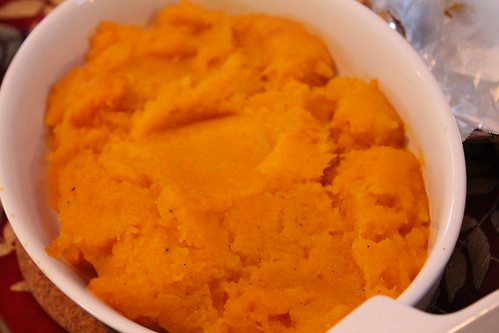 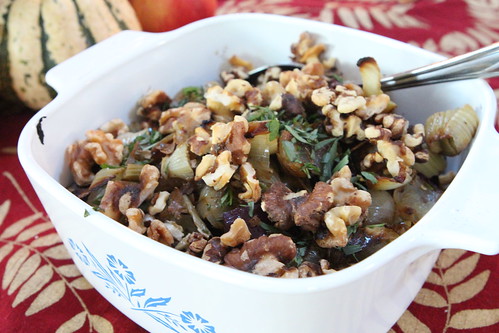 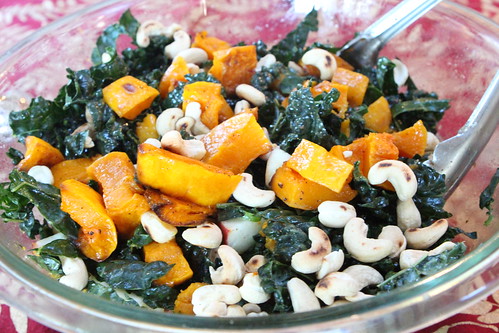 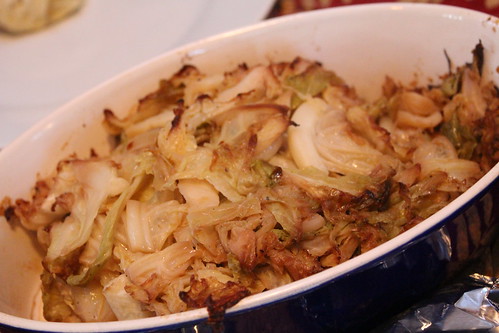 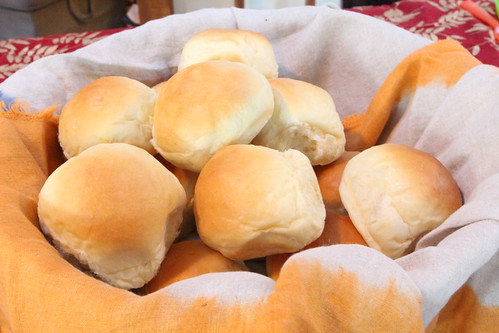 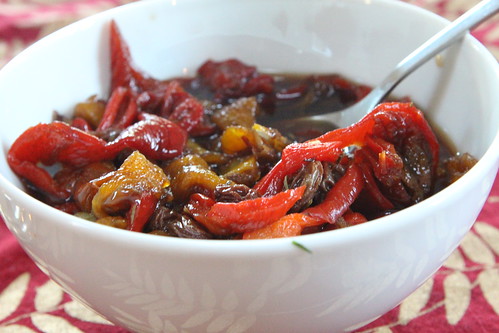 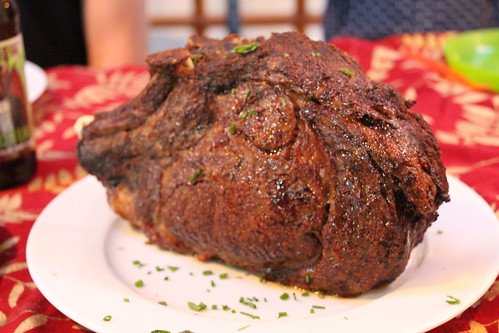 . . . except for the standing rib roast.

We fed Josephine some of the mashed butternut as her first solid food. It went over pretty well. She's been eyeballing our food intently for the last six weeks so I think she was wondering what took us so long. She was probably also wondering why she wasn't getting a taste of the prime rib. 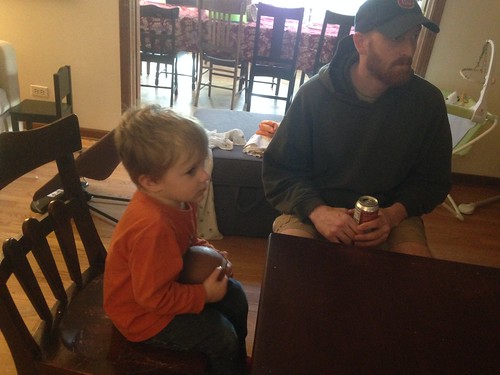 If the boys had started watching baseball at any other point in the last 107 years they would not be witnessing the Cubs winning. What a great time for them to discover the sport. That way they don't have to experience the pain their father did watching the Red Sox in the 1986 World Series and potentially killing their love of the sport.

Of course we don't know how this will end, despite the Nostradamus like predictions of Back to the Future II. 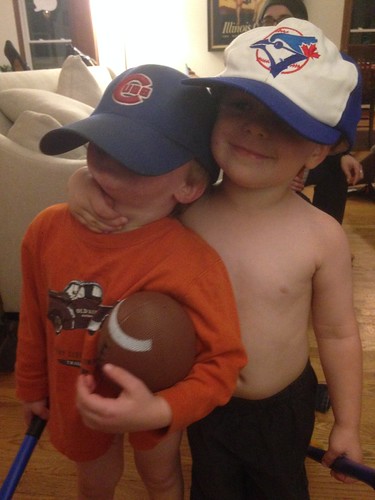 So we have a couple of sports fans on our hands at the moment. Martin is still a little vague on the concept of baseball but he does have a makeshift diamond in the backyard using flower pots as bases. Though I'm pretty sure the Cardinals made more of an impression on him than the Cubs. He still brings them up daily despite their elimination.


Josephine has almost officially graduated from the bath in the sink. Some would argue that she became to big for it a month ago but I just can't give up the simplicity of the sink bath.

Elliott continues to have a huge passion for puzzles and sometimes does between two or three daily, sometimes just disassembling and reassembling the same puzzle in one sitting.

Their Halloween costumes are coming together and they even stumbled upon the knight helmets that we ordered and have been using them regularly.

Jen left for Canada with Josephine yesterday morning. Elliott has not been happy about this the past two bedtimes but they have been fine throughout the day. Elliott misses Mummy a lot and tells me nightly that he is going to dream about her. Martin tells me that he is going to dream of "only Daddy" because he's kind of a jerk. With this split in the family we all somehow got our best sleep in a month last night. I can't remember a time I woke up feeling so well rested since the boys were born.

Elliott woke up sick a couple of nights ago. After giving him a bath and changing his sheets (then doing it again) he stayed home from school and spent most of the day on the couch. However, when Martin returned from school he was able to summon some extra strength to have one knight confrontation.

There is not a sickness in existence that can keep them from sword fighting.
Posted by Unknown at 10:11 PM No comments: