Easter came early this year in late March. As Easter likes to bebop all around the calendar I've already plotted out that Josephine's fourth and fifteenth birthdays will fall on the day itself. She's the only member of our family lucky enough to even have this as a possibility.

Easter weekend began with a neighborhood egg hunt and warmup for the real thing. Seeing as the warmup consisted of about one hundred kids in a field they would likely be in very good shape for Sunday's hunt.

They had a good time playing at the park, feasting on Dunkin' Donuts Munchkins, and doing their best not to get knocked over by the older kids. 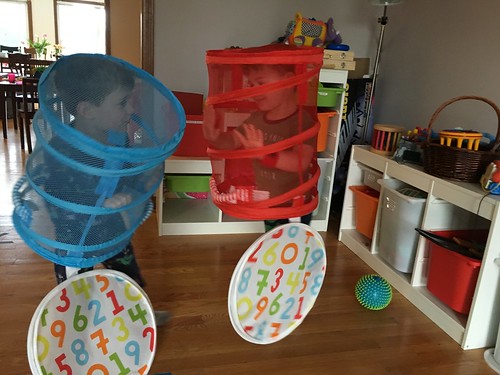 A late March trip to IKEA got us these great baskets to sort their stuffed animals. After setting them up it was only a matter of moments before they put them over their heads and became human lightsabers. It's amazing what kind of lightsaber ingenuity this generation has innately in them. The most I can ever remember doing was peeing in the toilet simultaneously with my cousin and pretending our pee streams were lightsabers.

It's like comparing hockey games now to games from the 1950s before they even knew you could lift a puck off the ice. There's just no comparison.

The Sunday egg hunt was a big hit. Elliott insisted on dressing like a ninja, an Easter tradition as old as time itself.

After a long hunt and brunch we all settled onto the couch to rest and presumably watch a movie of some sort. Probably that Easter classic Return of the Jedi. 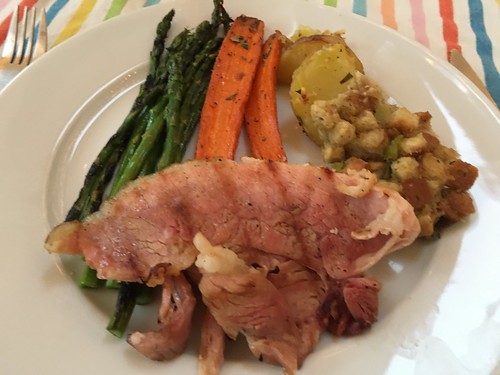 Easter dinner was delicious but a smaller holiday crown than we're used to.

I have no idea how parents did this when film was still a thing. Maybe that's why there is a grand total of one photo of me with all twelve (at the time) of my cousins that was ever taken. 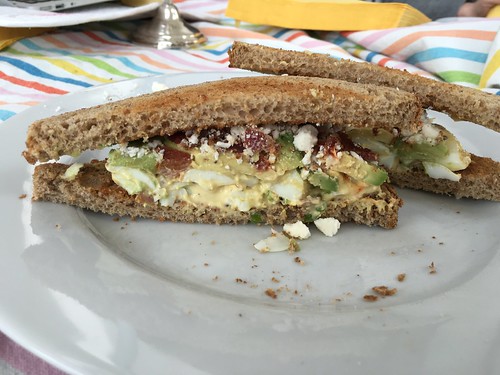 Aborted Easter eggs were donated to us and I made a huge batch of egg salad, the first I can ever remember making, that I made into sandwiches with avocado, bacon, and feta. This transformed Jen (a notorious egg hater) into a fan of egg salad. I still have mixed feelings about it but this batch turned out pretty tasty.

In the still destroyed half of our basement the kids held the first rehearsals for the family band.


Later they broke off into Martin and Elliott's folk duo who performed one of their classics, the theme song for Teenage Mutant Ninja Turtles. 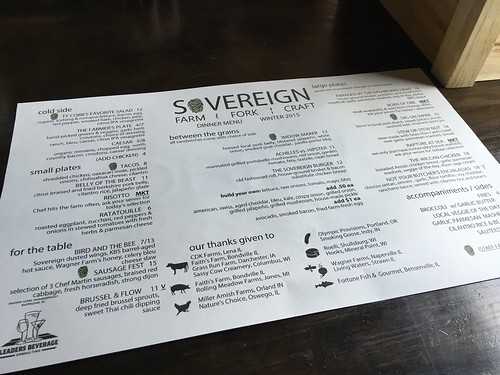 One night Jen and I even made it out for dinner, a rare occasion. We got to a restaurant that we'd tried once before with no luck but it turned out on a Thursday night at 5:30 we were able to get right in. Years ago this may have been deemed "not worth it" but since we are the parents of three children this kept our dinner right on schedule. We were even able to stop by a brewery on the way home, sample a variety of beers brewed with Girl Scout Cookies, watch a band plan, and still be home by 9:00. 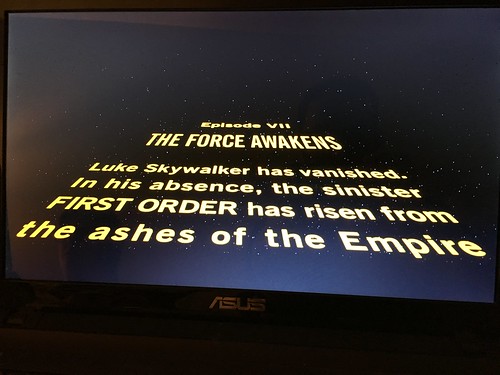 I was excited when The Force Awakens came out on digital download. I was also reminded by watching it again that it's probably a little too old for the boys.

They're going to be really pissed one day when they realize their sister saw it before them. 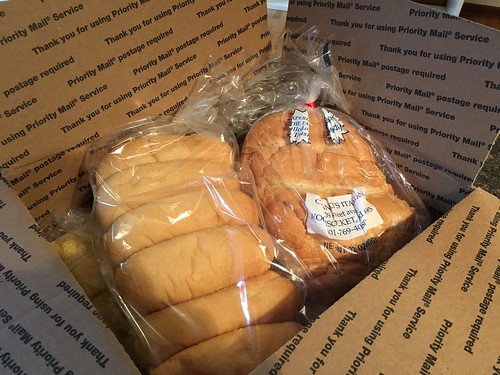 A friend from Woonsocket, Rhode Island sent me a care package of rolls from Dupras Bakery. These dynamite rolls are only really available in Woonsocket, RI, and are necessary to make the staple dish of Woonsocket: the dynamite. 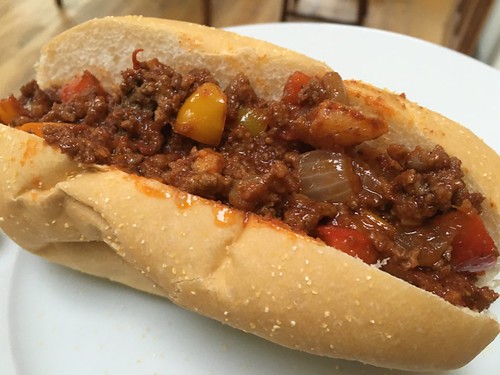 I broke with tradition of using $0.95 per pound ground beef and canned tomato and made mine with grass fed ground beef with frozen tomatoes from last summer in the garden.

The result was delicious and the boys went crazy for them. Much like their sister's love of Italian food, it's in their DNA.


Jen was a way for a few days visiting a friend in South Carolina. This left me alone with the kids. Lucky for me Josephine was able to entertain the boys for most of the time just by losing her mind and blowing raspberries at them.

I took them all to the park with their aunt and cousins where they packed a lunch and Elliott rode his tricycle the entire way, even hooking it up on the bike rack when we got there.

Later on I dug out my Wii games from the basement, got a borrowed Wii from grandma, and set the boys up to play boxing which they loved. Previously I'd set up Mike Tyson's Puchout and watched as Martin defeated Glass Joe on his first attempt without taking a single punch. This is much better than I did playing this game for the first time as a ten-year-old.

Nana and Grandpa rolled into town the next day along with the beautiful weather. We were able to enjoy barbecue on the deck to welcome them to town.

The boys quickly whisked my parents away to help them do puzzles . . .

. . . and inspect the furniture they'd brought with them. 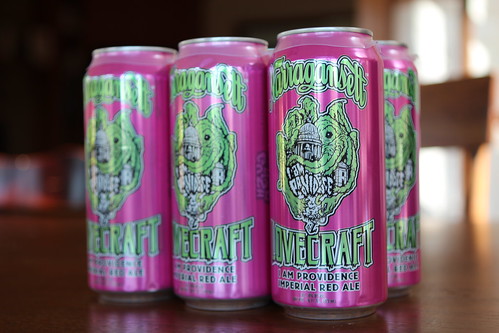 They also brought the gift of Rhode Island beer. 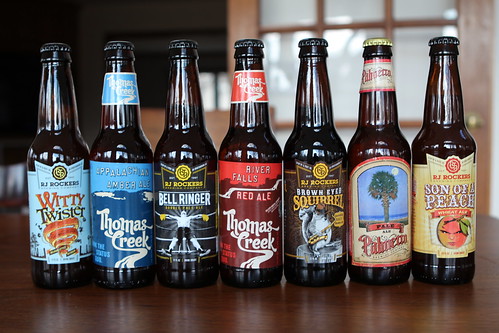 Jen, returning from South Carolina, graced me beer from the state she visited.

The next night we made hamburgers and Josie put down a tremendous amount of cheeseburger. 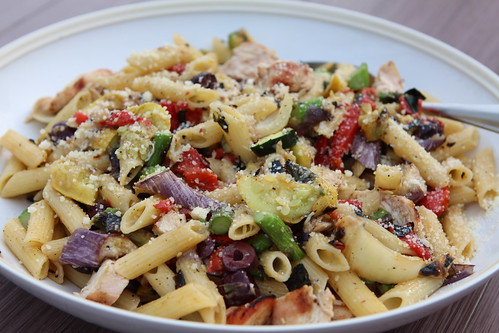 The following night was grilled vegetable pasta. Living in New York for ten years has still not left us and we never pass up an opportunity for outdoor dining.

While visiting Nana taught Josie how to clap which was a big hit.

Josie also had her one year check up where she proved to be very healthy, very full of sass, and very cute.

These are the doctor's diagnoses, not mine. This is merely based on medical fact.

On Josephine's birthday morning Jen brought up a huge amount of toys from the basement and Josephine, along with her brothers, had a blast in a veritable child's playland on our living room floor.

The next night we grilled ribeye steaks, continuing to take advantage of the weather ahead of the prediction of thunderstorms.

The boys brought in cupcakes for Josie and we sang Happy Birthday, baffling her.

One thing that she was not baffled by: what to do with her cupcake.

Auntie Pat and Auntie Debbie came in with Uncle Dave. The Aunties read stories to the boys for bed which they loved. This consisted of many Elephant and Piggie books after Auntie Pat got the boys a dozen or so for Christmas. 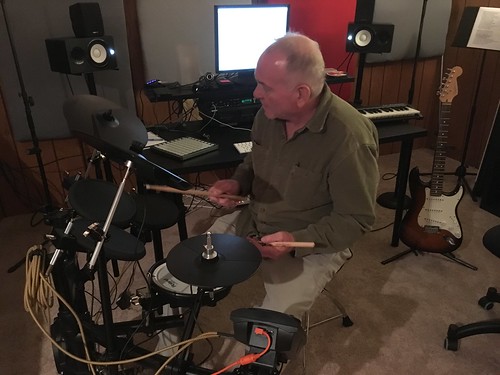 Dave, on the other hand, took advantage of the new V-Drums in the studio. I'll be surprised if he hasn't ordered himself a set yet.

On the weekend we had Josie's party, a tea party, with many little tea sandwiches and desserts.

Josie had a blast, though she was a bit suspicious of the helium filled balloons, using her newfound pointing finger to point out where they were at all times and making sure we kept them clear of her.

Josie had fun with everyone over though her brothers were ecstatic.

They had fun testing the weight limits of our new hammock.

They had fun opening all of her gifts.

They had fun admiring her cake from afar.

They had fun admiring her cake from close up.

And Josie had fun eating it.

Maybe not as much fun she had playing with Water Bugs, her new bath toy. They boys even played with it in their room before bed.

Tonight Jen is away at a work function. The boys were beyond wild. They were running around, destroying the house. While getting their sister ready for bed I left them alone for less than thirty seconds and returned to find Martin using his toothbrush to "brush" his brother's butt. After explaining why that was not advisable things became crazy with all manner of screaming, peeing, crying, and Josie thrashing around wildly in every direction.

After a few minutes everything reached a frenzied crescendo where everyone screamed all together then suddenly Josie slumped in my arms and shut her eyes and the boys quieted completely. A wild day rounded out everyone was silent all together.

It was like the orchestral finale to A Day in the Life reaching a climax then ending with the chord that lasts forever.

Sadly, the silence of all three children asleep will last considerably shorter than forever.
Posted by Unknown at 11:21 PM 1 comment: