God Made Some Sober Winos

Friday began with a slightly later start than the previous day. Partially this was because we were sleeping off bellyaches from the previous night's enormous meal. 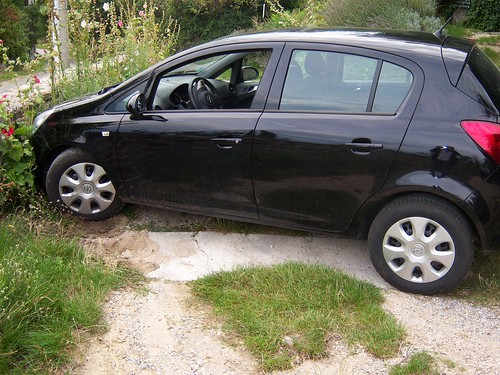 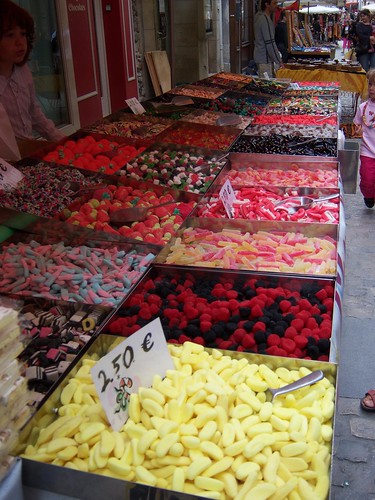 The day's market was in Dieulefit which wasn't very far at all. We had a very light breakfast of a tiny bit of yogurt with about three tablespoons of muesli and figured after the previous night's dinner that should hold us over just fine. 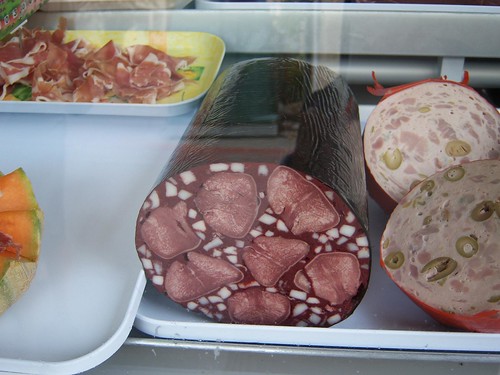 The market at Dieulefit seemed very sparse. It was much more spread out through the town than the previous two markets we'd been to and we nearly missed a large portion of it because we thought we'd reached the end. After about twenty minutes it became obvious why the market was so quiet, the clouds were now overhead and it became evident that it was going to rain. 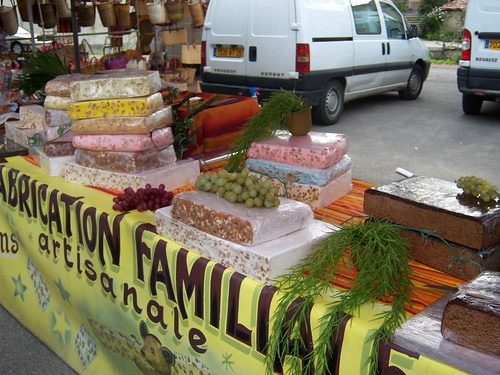 We made the most of our trip, weather be damned. A candy vendor who was extremely convincing and good at what he did managed to convince us to buy some of his wares, which we were utterly not in need of. The cost for this candy was somewhat akin to putting a down payment on an automobile or perhaps buying an organ on the black market, but I must say this guy was a good salesman and he deserved every cent he got from us. His young son was clearly learning the family trade and was quick to shove out an empty bag and tell the Madame to help herself to whichever candies suited her. 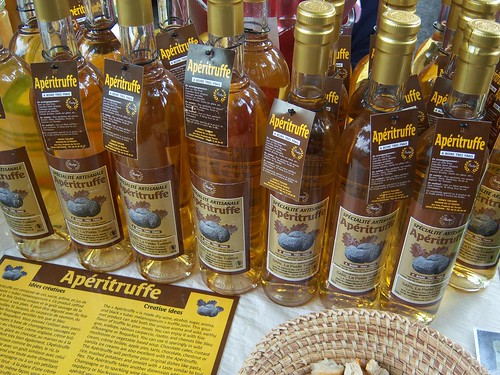 There was a stand selling truffle-infused olive oil (normal), truffle-infused balsamic vinegar (something I'd never seen before), and a truffle liqueur (just plain crazy). He offered us a taste of the liqueur which he suggested as an aperitif for foie gras if my French is correct (which it probably isn't). After a little debate we (mostly I) decided that 18.00E was a bit of money but this was just too strange an item to pass it up. 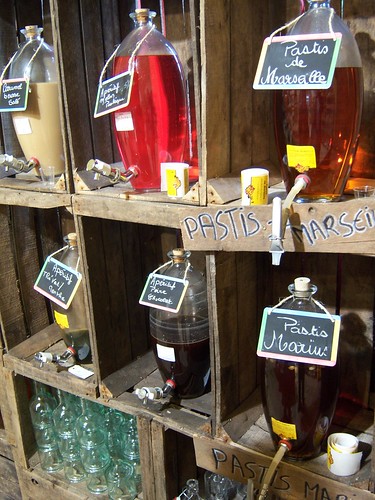 We went into one great shop that was selling all sorts of liqueurs which you could bottle yourself. They had a lot of great pottery as well. Unfortunately when Jen picked up a mug off the shelf a pair of tiny little ceramic spoons fell out and shattered on the floor. The woman at the shop was very nice about it which made us both feel guilty about slinking out of there without buying anything. 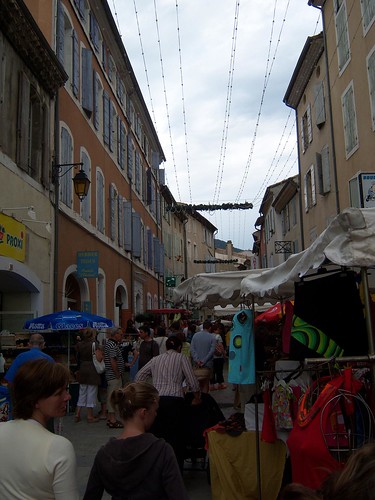 We also picked up some vegetables for dinner at some of the few produce stands which were in shorter supply than at previous markets. We then decided we were done and picked up our pace to walk back to the car. One of the vendors mentioned that it was raining in Montélimar, a few towns over, so we dashed quickly and barely made it to the car before the rain started. At that point we had to drive the car through town, through throngs of shoppers who were very unconcerned with automobile traffic. I slowly learned that the trick was just to drive straight into the groups of people, slowly of course, and eventually they would get the hint and move slightly out of the way. It was a little unnerving as parents held their kids by the hand and let them be the ones to be standing directly in front of a moving car. This is not the method I would use if I were a parent, but perhaps when I do become a parent I too will not be overly concerned with the safety of my offspring. Only time will tell. 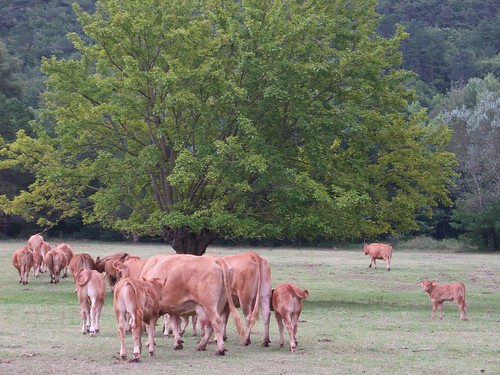 After we got out of town we stopped by a pottery place on the way back to Châteauneuf-de-Mazenc named Poterie Mont Rachas. When we parked the car there was a small group of cows hanging out right by the fence near to the parking lot. They were all lying in the grass and seeming to enjoy their afternoon. As soon as I approached they all slowly started to get up and walk away from me. There is something really humiliating about watching a cow slowly amble off into the distance, clearly unimpressed by you. When a cow insults you by turning its back and walking away it is painfully deliberate. 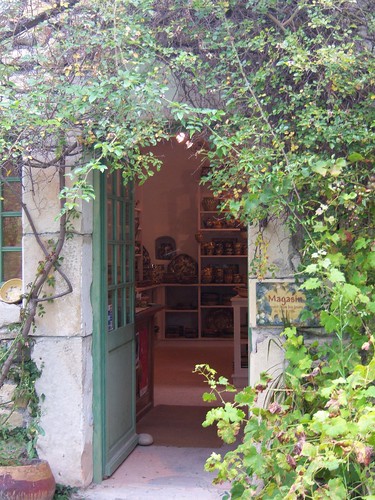 In the shop we debated for a while over a few dishes that we really liked. Before leaving, Jen's Uncle Gregg had warned us, "If you see something you like and you aren't sure if you should spend that much money on it, just buy it. We saw something there for 60.00E once and saw the exact same piece in Napa Valley selling for $800.00." With that ringing in our ears we spent a little more than we probably should have but got two very nice things, which we will be using for our next Thanksgivings whether they be Canadian, American or both. We nearly got some additional orange appetizer/salad plates but determined that they were not quite remarkable enough to make the additional investment. We'll see if that creeps up to give us a bite of regret on our future butts. 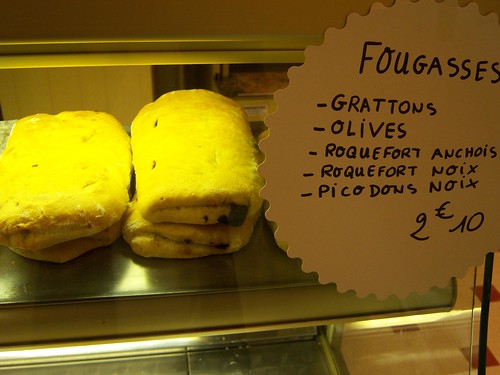 We stopped off in La Bégude to pick up some things for lunch and dinner, a fougasse with olives, a baguette for dinner, a brioche sucrée for my afternoon tea and a mille-feuille for an event to be determined later. Then we got home and had one of traditional hodge-podge lunches with leftovers and newly purchased goods from our trip. 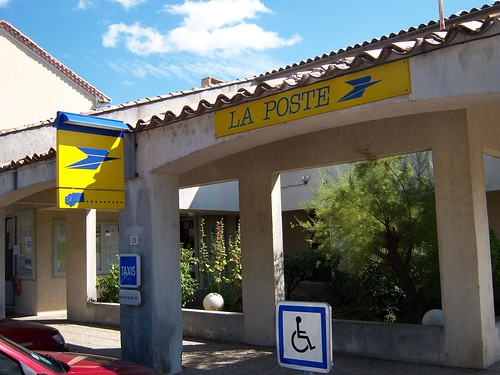 Before setting out on our afternoon adventure to wine country which goes through apricot country (did you know the apricot was the orange of Provence? So a sign on the street announced) we stopped by the post office to buy some prepaid boxes for shipping things home. After waiting in line for about twenty minutes the woman was able to locate only one tiny box and one tiny bag to ship to the United States. The cost: 36.00E. Our feelings: totally not worth it. However, since we'd purchased them we loaded them up with about 12.00E worth of things we'd purchased and got ready to drop them off at the post office the following day. 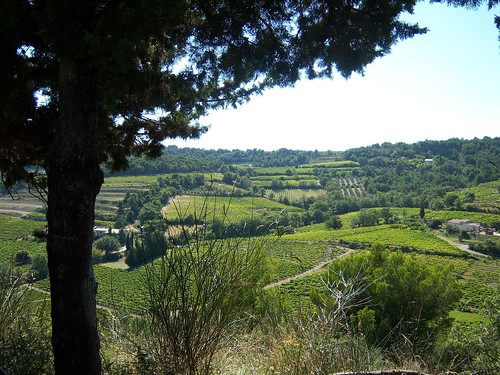 Earlier we had gotten the directions to the Domaine du Moulin, a vineyard in Vinsobre whose wine we'd had earlier in the week. The drive was another slow, winding drive up the side of a mountain which brought us straight into the heart of Vinsobre. There was an incredible view going up the side of the exceptionally narrow road. The road, just barely wide enough for one car, was at times surrounded by rock on one side and a sheer drop off the other. Sometimes the sheer drop was on both sides. Fortunately for us we encountered precious few cars coming in the other direction. 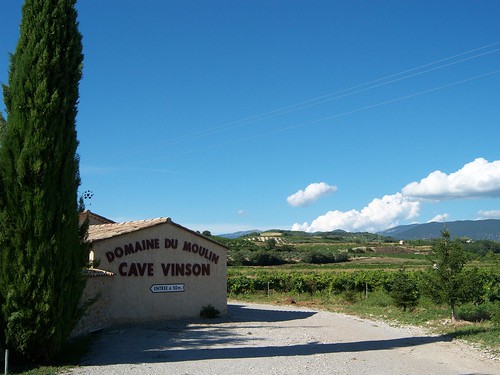 Our continued method of finding a town then assuming we would just stumble upon the thing in the town we were interested in paid off yet again. We found the vineyard and entered the cellar where a woman conversed for a bit with Jen and let us try five or six different wines before making our selections. We asked if the possibility existed to ship it to the United States which earned us a laugh from the woman. Although it was apparently difficult to ship bottles to the U.S. always, since September 11th it has become nearly impossible for them to ship anything to the United States. If they do it is at a cost so great that no one would be willing to pay. Turning that 4.80E bottle of wine into a $30.00 bottle is not a great proposition for business.

There was a helpful customer inside who offered us a few suggestions of what we could do to get the wine home, including buying the five liter bag in a box of the wine. Sadly, we were pretty sure we couldn't fit one or two bottles in our luggage, let alone a five liter bottle. 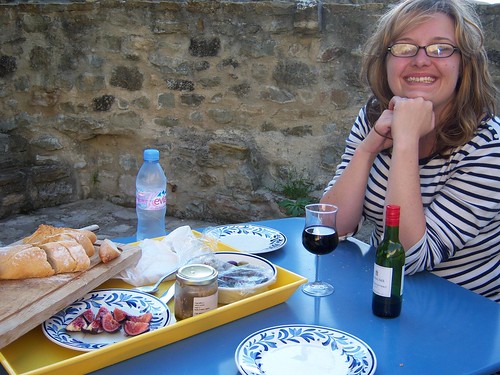 When we got home we had a few snacks out on the terrace to try to clean out our fridge. We also did battle with a squadron of nasty bees, hornets and unnamed annoying bugs who frequented our east terrace and wanted to lay claim to the olives we'd brought out there. 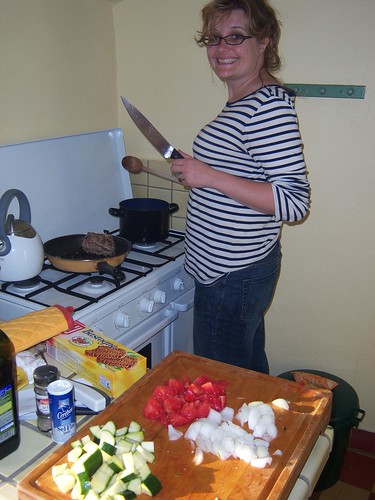 Jen and I prepared dinner. I seared and roasted the veal while Jen did everything else. She made a stew of garlic, onion, zucchini and tomato based on a recipe my mother made very often during the summer when I was growing up. It was very tasty. 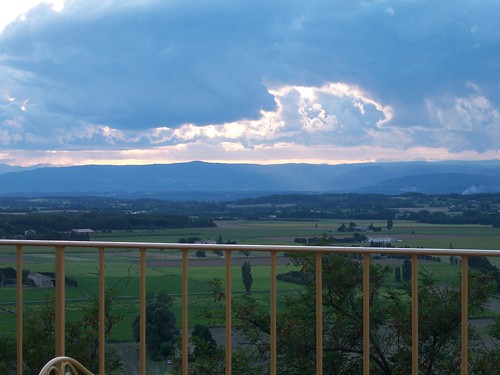 The sun had just been covered by the clouds so the west terrace was much more accessible at that point and we were able to dine outside while we enjoyed, one last time, the view from Châteauneuf-de-Mazenc. 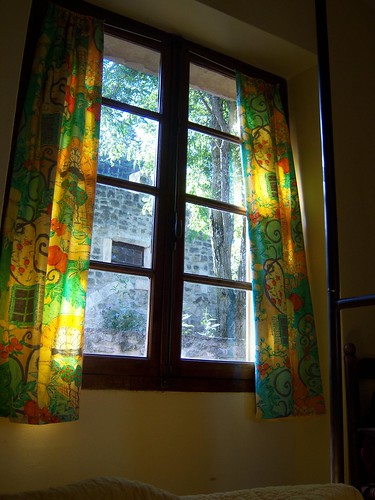 After dinner we began the unenviable job of packing for our train ride to Paris the following day. We had to be very judicious about what we packed, what we shipped, and what we left behind. Not much was going to be left behind. I did decide, however, to leave my clogs behind as they were already in rough shape before the journey to France and now, sadly, they were just about ready to fall apart. That would free up quite a bit of room in my luggage so that we could take home the incredible amount of merchandise we'd accumulated in the past few days.

Tired, we sat around and read while listening to The Butterfly Ball, ready to turn in early for our long journey back to Paris on Saturday.

Email ThisBlogThis!Share to TwitterShare to FacebookShare to Pinterest
Labels: How'd we use it?, Vacation