On Friday we took the boys on a trip to Grandad's farm to see his vegetables.

Along with their cousin they had a good time helping Grandad. Most of their help came in the form of stomping on his plants.

They also helped haul a zucchini roughly 50% their own size.

But mostly they stayed in the cool of the air conditioned car eating snacks.

I was making some whipped cream for dessert and Martin was very insisted on helping. He actually made most of it and was fascinated by the process as it slowly came together. 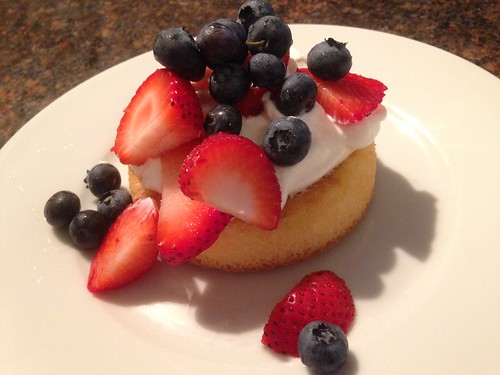 We topped it with fresh berries all on sponge cakes and it was pretty popular. Not ice cream popular, but popular. 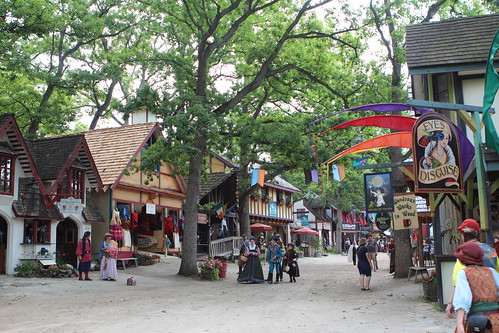 On Saturday the day finally came when we gave the boys their birthday present: a trip to the Renaissance Faire in Wisconsin.

We lucked out in getting there early and securing a boss parking spot. Initially the faire was fairly empty as we traversed its thirty acres. The boys enjoyed playing on thrones and watching a jester belittle me in front of them.

Grandma and Josie enjoyed finding any shaded area possible in the 95 degree heat. Thankfully it was overcast and extremely shady. Even with those factors in our favor it was on the outer borders of bearable.

Elliott declared himself captain of the pirate ship and agreed to have me serve as his first mate.

After watching the 1938 Robin Hood with Mummy the night before Elliott took to the bows and wanted one. Thankfully we were able to distract him and save ourselves from either spending $90 on two bows for the children or enduring a massive tantrum.

I'm not sure which would have been preferable.

Jen did, however, get them some Robin Hood hats with feathers of their favorite colors. Not the preferred hat for 95 degree heat but they will get a lot of play in the cooler months.

I thought Martin's favorite part would have been the turkey leg given his intense love of meat on the bone. It may have been the heat or the fact that he was unable to lift it but he only made it through a few bites.

I took Martin to get lemonades which were an impossible distance away. They served me three without lids of a carrier and I had to carefully balance them on the long trip back, all the while having to convince Martin to carry on through the high temperatures, at one point stopping and placing them on the dirt ground to adjust his pants.

When we returned Elliott was having a tantrum due to me leaving, the heat, and the fact that we had waited too long to feed them. Eventually a large man dressed as a guard starting mimicking his cries and he just stopped, defeated, and sulked until we convinced him to get a sno cone.

We finally made it to the jousting stage after a lady rubbed some sort of perfumed oil on Jen's hand against her will. I was pretty sure Jen was going to use her free hand to knock the lady out so we could see the jousting before it ended and save the children from complete rebellion. 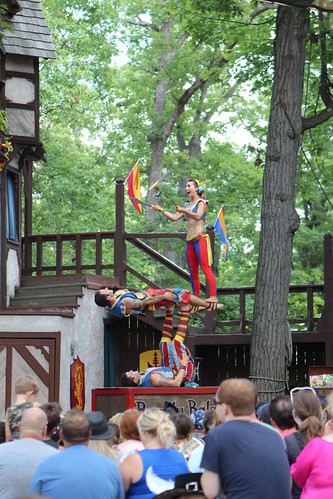 It finished up with an impressive acrobat troupe called Barely Balanced. After peeing for the first time in six hours and seeing this Elliott was sold on this and he chatted about it the entire way home while Martin slept.

There was no nap to be had but they did made a castle in the shed to protect themselves from dragons.

Trips like this teeter on the brink of disaster but with some careful management of snacks and distractions they can be quite a lot of fun. The upside is that it shortened the time it took for them to go to bed to about twelve seconds after the door was closed.

Days like this are fun but they make you glad that they do not happen more than once a year. You truly need every moment of time to gear up the nerve to try it again.
Posted by Unknown at 12:04 PM