August is nearly behind us. Another mild summer is coming to a close. I'm thankful for the temperate weather. It would figure that the first two summers of my life living with central air conditioning are two of the summers that I've needed it the least.

We took the kids to a concert at the Morton Arboretum for their summer concert series. There was a giant squirrel there that intrigued and frightened the boys. I guess it's possible it was a man in a squirrel costume but either way it was alarming.

Josephine has really begun enjoying her crinkle giraffe though silky scarves still remain her number one most fun experience. 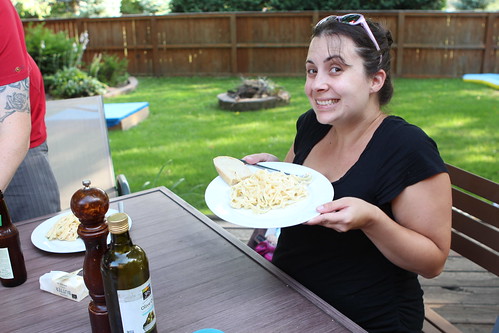 On a fairly hot and humid day, given the temperate nature of this summer, Lauren developed a pregnancy craving for Fettuccine Alfredo. Against my better judgment I cooked up a big pot and we ate it outside as if it were burgers and hot dogs.

Grandad returned from an outing to Kalamazoo to visit Auntie Lisa with a selection of delicious donuts and stopped by to let the boys each pick one, thus ruining their lunch. What else are grandparents for? Or aunts? Or parents?

Josie has been smiling almost nonstop for the past month. She smiles primarily at Mummy, then at her sheep mobile, then -- in distant third place -- Daddy.

The other day, while having dinner, we heard the unmistakable sound of an ice cream truck. The boys always ask what the sound is and we usually play dumb. Living on a cul de sac we never really get any trucks down our street, so why get their hopes up. This night, however, I could hear them making the turn and I dashed out front to stop the truck and the boys' minds were blown.

The day care summer picnic also happened which meant hot dogs, chips, and a tumble in an enormous bouncy house with dozens of other children. This sounds like a recipe for disaster but it ended surprisingly well with very few ill children and no blunt force head trauma.

The night ended with some more frozen treats. The average amoutn of frozen treats they have consumed this summer is approximately five per day.


Martin has created an alter ego named Dirty Nelson and he often changes into him while singing his new single, Hey, Don't Hurt Me. 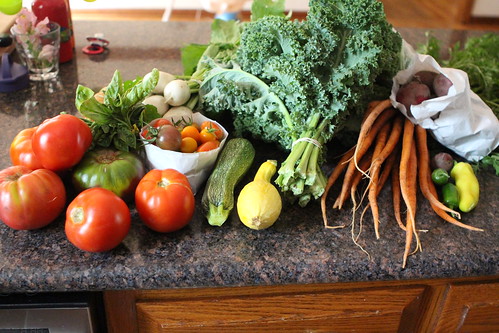 The farm share has continued, though our documentation of it, along with our utilization of its ingredients, has been lackluster at best.

One Saturday, after work, we set up a tent and me and the boys camped in the backyard.

We made hot dogs and baked beans in the fire pit and then slept all night in the tent in the backyard. We got to sleep around midnight but Elliott had a bit of a cough which kept him up. Overall I was not expecting it to go as well as it did. They kept trying to make a break for it and run back int the house but eventually gave up and we had a good time camping out. 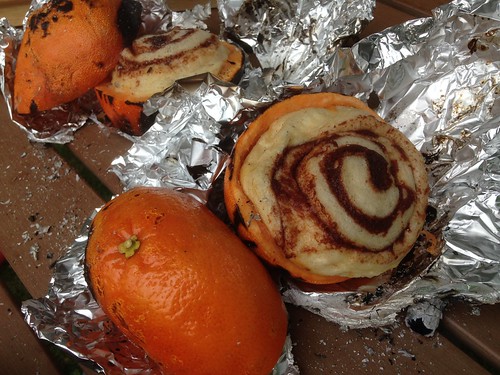 The next morning we started another fire and baked cinnamon rolls in the fire pit, encased in grapefruit skins. 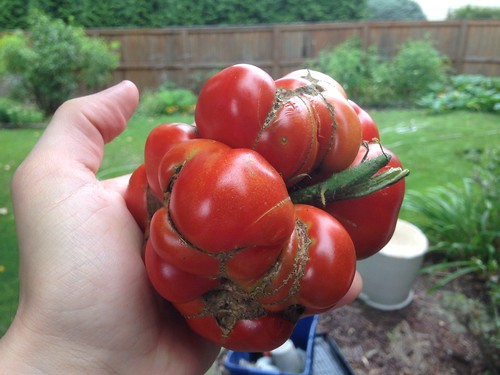 The boys have had a blast playing in the studio. This usually means they play with guitars for a little bit, then Elliott uses a güiro to poke at some boxes. He believes this to accurately simulate what it looks like when someone robs a bank. Then I pick him up and toss him into the jail we've made out of their old playpen walls. He promises not to rob the jail again. I let him out and he does it again.

He can play this game for an infinite amount of time without getting bored.

They had their last day at the Beginners classroom this month, and begun tthe new Intermediates classroom the following week.

We took them out for a celebratory dinner and ice cream adventure.


Josephine also rolled over for the first time but neither of us saw it. A few days later Jen saw it happen but I have still not witnessed it. I have, however, recorded lots of video of her not rolling over, just like I did with her two brothers. 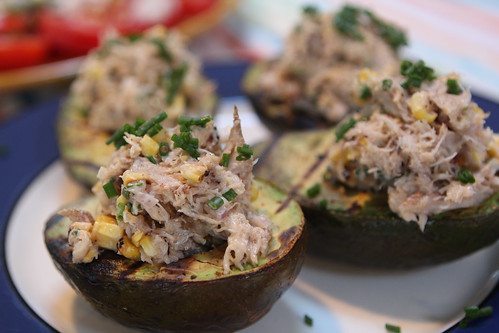 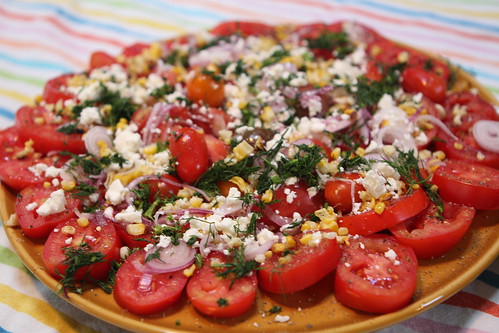 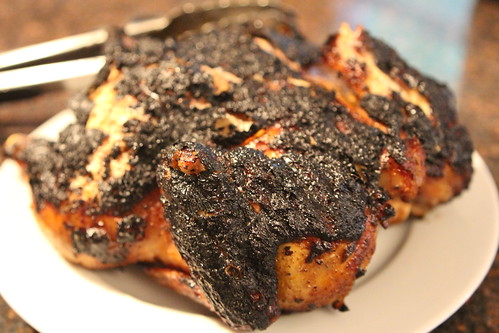 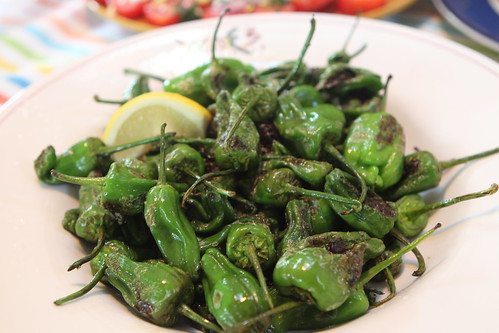 For Doug's birthday we made a summer feast. Compared to what we've been having lately it was very nice. There was Sriracha crab salad in grilled avocados, jerk grilled spatchcock chicken, pimientos de Padron, and tomato feta salad.

It's nice to have time to make something more exciting than pasta for dinner. 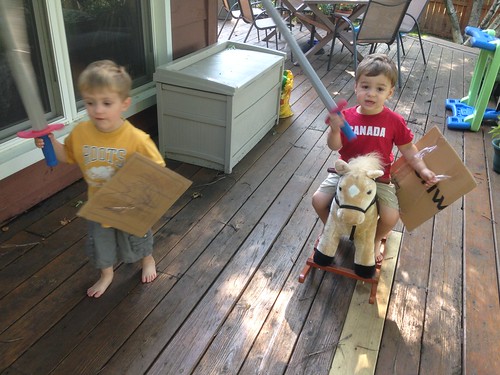 I made shields for both of them out of cardboard and they think they are just about the best things since their foam swords. Elliott will only use it when he has on his gardening gloves, and usually his boots for authenticity. They spend about seventy-five percent of their waking hours pretending to be knights. The other twenty-five is spent pretending to be jedis.

Last Wednesday I had to say goodbye to the boys as I wouldn't see them again until Monday night. We left on Friday morning for our trip to Washington D.C.

We too the baby with us and Josephine got to have her first plane ride. She has now spent quality time in Illinois, Wisconsin, Washington D.C., and Virginia.

We had a Chinese feast at the China Garden in Arlington, Virginia.

And Josephine got to enjoy the luxury of hotel living in Washington D.C.'s Chinatown. 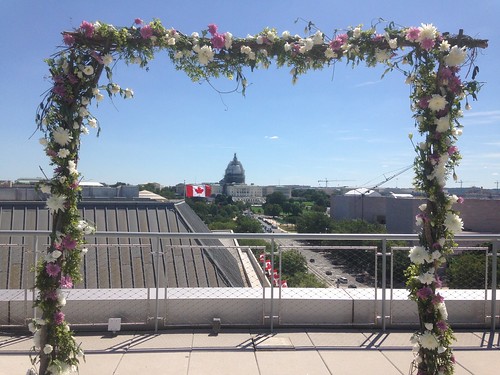 The wedding we attended, of our good friend Debbie, was located at the top of the Newseum in D.C. overlooking the Canadian embassy and the capitol building.

Josephine got to have her first subway ride as we ventured back out to Virginia later that night.

She also got to experience the Georgetown eatery, The Tombs, which no Georgetown alumn can resist when in town.

Last night we went back to the Morton Arboretum for the conclusion of their family concert night and saw Duke Otherwise who put on a heck of a show. Martin and Elliott both participated enthusiastically, though they did it safely on the blanket with Mummy and Daddy and did not join the flock of children gathered around the performer.

Today we executed our ambitious plan of taking the train to the Brookfield Zoo. This was my idea because, taking the train downtown to work back in June, I was surprised that it was a mere thirty minute train ride to the zoo. The problem, of course, was that I didn't have children with me when I discovered that. I also did not realize that the zoo stop on the train was no exactly across the street from the zoo. This resulted in a two hour door-to-door trip.

The guys had a pretty good time at the zoo, even though we got there at nearly 11 o'clock, a full hour ahead of plan.

We got to go to the butterfly exhibit and a butterfly landed right on Martin's head where it remained for about two full minutes. I had visions of him swatting at it, killing it, and having our newly purchased family membership cards revoked.

Instead he was a great sport and the butterfly will now live a long life or potentially die at the hands of someone else's child.

I told them they could go on the carousel but the ticketing process combined with us needing to make our train made me go back on my word. Elliott was fine with this but Martin was about to lose it when we stumbled upon an ice cream vendor and I distracted both of them with supremely messy push pops.

It took an entire package of wipes to clean them off while we waited for the train but it was money well spent. Apart from Martin losing his mind when I lifted him down the steps from the train the rest of the trip home was fine.

Time did not allow for a nap. Martin generally does okay in these situations, Elliott is a little more unable to cope.

An important lesson was learned today: taking the train to the zoo is a fool's errand. It was a romantic idea, and the kids had fun on the train, but I don't think we would ever make the decision to do this again. Last time we went the line for parking took a while so we thought this would be easier.

Sometimes we are so stupid.