The traditionally cool, crisp days of July are upon us. As is traditional in July we wake up to a freezing house every morning and I have to turn on the heat in my car on the drive to work.

We had many plans for the lead up to the Fourth of July. I normally have to work around the Fourth so we lined up all our plans right before the holiday.

Then Jen got a horrible virus.

We spend the morning on one of my days off in the studio. I tried to get the kids outside to play since it was a rare, beautiful day. However, they really wanted to play with instruments and they played downstairs for hours.

Both of them tried out all of my guitars and basses and then spent a lot of time rocking out on my keyboard which was running Moog simulator software.


I'm pretty sure that Martin could have released this as an LP in the 1970s and made a pretty penny.

The following day Jen was feeling better and we loaded up onto the bus to go to Eyes to the Skies.

We paid an exorbitant price to get them a ride on their first roller coaster.

They were really excited about it, but all the adults were told we could not ride with them.

The looks on their face as soon as the ride started up lead me to believe I had made a grave error and that they both feared for their lives. However, when they disembarked they were full of smiles and leaped about telling us how awesome it was.

I was pretty sure they were going to cling to me and tell me to never subject them to such a thing ever again.

Then they were thirsty. I went to the lemonade booth to get three lemonades, one for each of them and one for Jen. Then they told me that was $18. I then informed them that two lemonades would suffice.

Then I ordered two corn dogs for them. They told me that would be $14. I told them that I only wanted two corn dogs, not every corn dog that had ever been fried in the state of Illinois. They explained that it would still be $14.

After that we watched some live music, which somehow was free, and the boys had a great time watching a dual piano band rock out some top 40 hits and oldies. 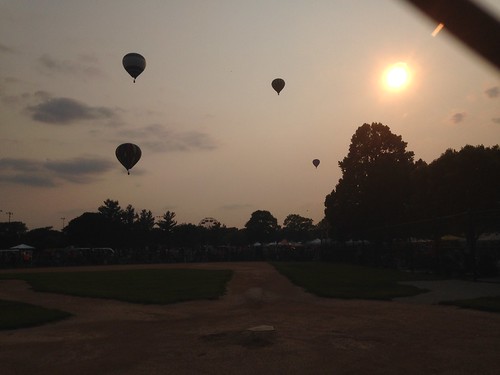 Then we watched the balloons take off into the setting sun.

Eyes to the Skies is fun for the kids but I can see why it's only once a year. It takes you another year to save up the money to be able to attend the following year, and it allows time to soften the emotional wounds of keeping toddlers up past their bedtime, journeying on shuttle buses, and the overall stress of attending with three children.

We spent the Fourth of July at Auntie Lauren and Uncle Doug's and they woke up with their dimming American Flag glow sticks beside them in bed. This was after falling asleep pretending to be Darth Vader and Luke Skywalker fighting in the dark.

The Tour de France started up and Martin declared that he was "very excited for the bike race." We made our traditional start of the Tour biscuits and enjoyed some slow-paced narrative about the French countryside and chateaus for breakfast.

Josephine has been less able to escape the affections of her brothers lately and is frequently subjected to less-than-gentle hugs and kisses multiple times a day.

Yesterday was their birthday and they woke up to a pretty sweet spread that Mummy put out for them complete with streamers, muffins, and new books.

Martin cautiously confirmed before eating, "There's a bone in this, right?" If he's going to eat meat he doesn't want it to be cut up and he prefers it right off the bone. He explains that it's because he's a "Dinosaur Rex."

Then we had a berry cream cake while watching "The Mysterious Cities of Gold." It's pretty much like it was my birthday too.

Josephine has been smiling a lot lately. Jen dressed her up in an outfit that her Aunt Lisa aptly claimed made her look like a "little informal pope." She has now been dubbed her Pope Josicus IX.

This morning the boys took in some cupcakes for their friends to celebrate their third birthday at school.

Before I go to work I got to hang out with Josie. She give me lots of smiles but there is no one she is more fond of than mummy. She give her the most and the highest quality smiles.

It's probably because I don't feed her milk out of my boobs.
Posted by Unknown at 12:13 PM