I have to admit, I don't mind mowing the grass nearly as much as I thought I would now that it's part of my weekly routine. It gives me a chance to listen to my headphones and be out in the yard.

The same cannot be said about my feelings on raking leaves. Luckily it only lasts for a few weeks of the year but I find it to be a loathsome task. 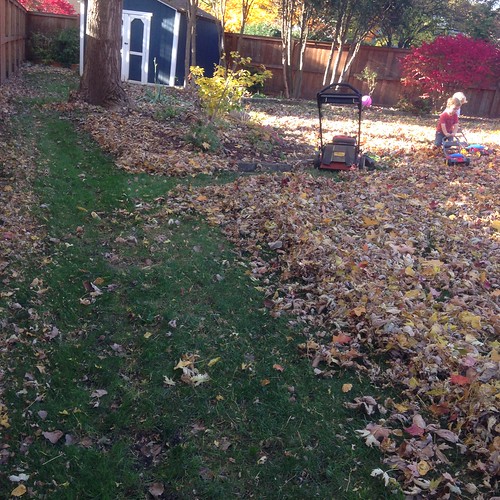 I was happy that I sprung for the mulching mower last spring. It turns a task I hate into a task I don't mind. My simply mowing the leaves I don't have to rake and I can convince myself that it's helping the lawn by creating a natural fertilizer out of finely chopped leaves.

There's probably some science to back that up.

The front yard was a little more of an ordeal but the Bubses enjoyed it immensely as they frolicked in the piles of leaves taller than they are. 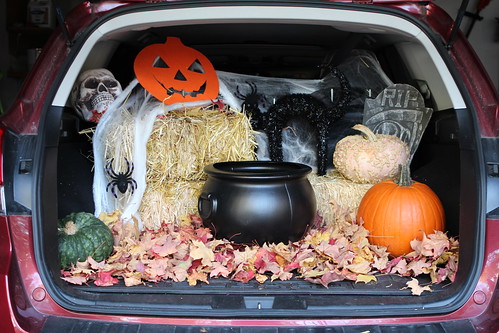 We participated in yet another year of Trunk or Treat which they oddly changed to Trick or Trunk this year.

They boys had way more fun this year. This was due in part to the fact that it was about 30 degrees warmer than last year but also because they were a little more mobile and able to make three or four trips to the buffet line to bulk up on chilli.

The following morning we went to Boo at the Zoo. Despite this horrible picture they seemed to have a pretty good time.

They also got their first ride on a Merry Go Round with Mummy and Grandma.

At home Elliott continued to work on his new activity in which he plays a "violin" using a rolling pin and a set of kitchen tongs as the bow.

Nana and Grandpa came on Wednesday and were immediately put to work on story duty. First up was Harry the Monster, a book from my childhood collection. 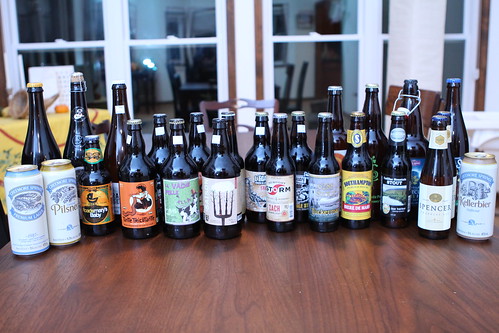 They also brought up the beer haul from our North American Road Trip last summer.

On Thursday night we went to a puppet show downtown with the boys, followed by a trip to Lou Malnati's for dinner. 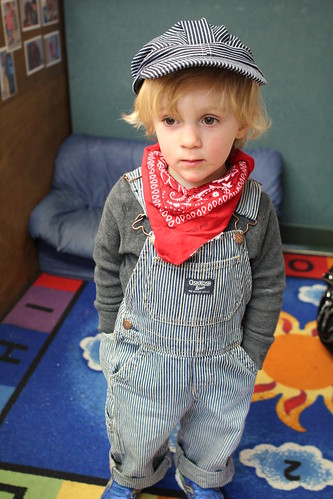 The next morning they had a Halloween parade at school where Jen went with my parents and unfortunately, like all events like this, had them relive the trauma of drop off twice in one day!

That night we all went out Trick or Treating. We did 3 houses in Jen's parents' neighborhood, then 4 houses in our neighborhood. Afterward I felt like we'd Trick or Treated across seven states and thousands of miles. It didn't help that it was ice cold with 40 mile per hour wind gusts.

We carved a late pumpkin that night and they were immediately obsessed with it. 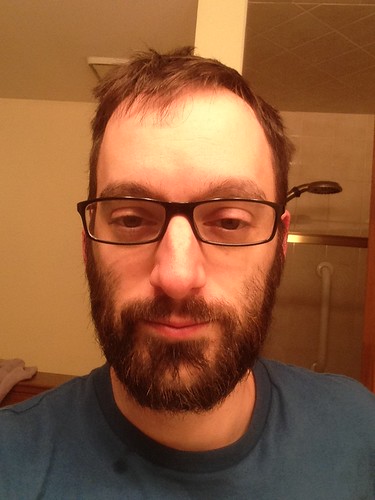 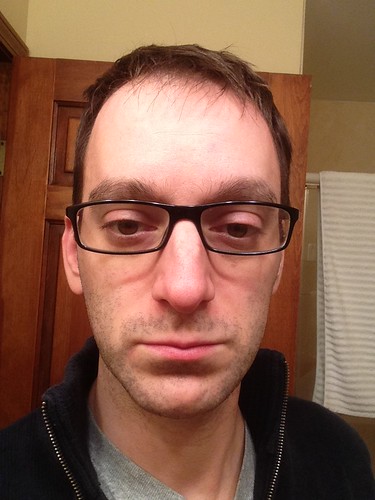 I also shaved for Movember, the first time since they've been born. We let them watch. They were fine with it unlike the time my father shaved when I was little and I wouldn't talk to him for days.

Over the weekend Nana read a mess of Storybots with them which they love to a degree that cannot be measured.

After that my dad worked on fixing some electrical outlets while Elliott supervised. 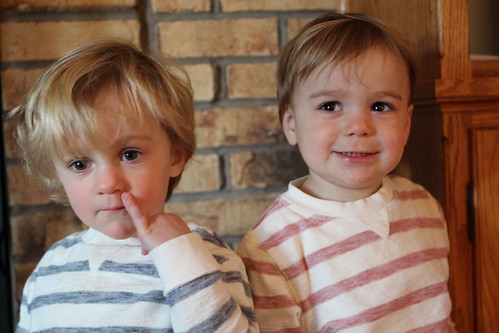 Then, looking at them, we found that we had to take advantage of this moment to get them haircuts. 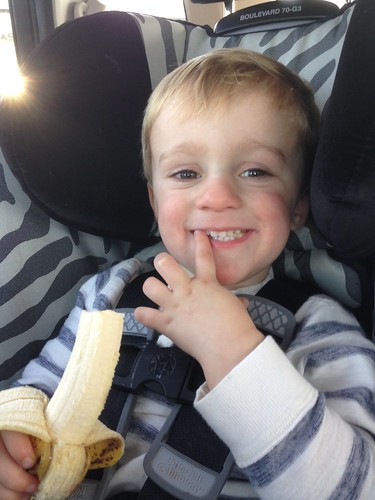 This went shockingly well as they were able to play on the slide and all the toy cars in the place. The only sore point was when I dropped off Mummy on the way home for a yoga class and they did not approve. 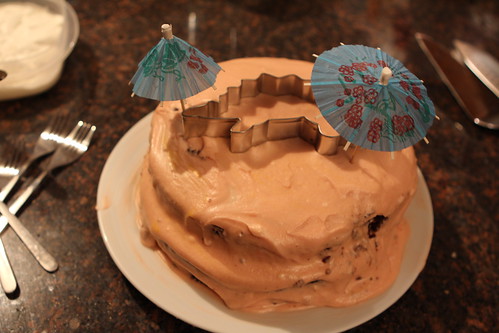 That night, after a delicious meal of dynamites, I got a birthday cake with a stegosaurus and cocktail umbrellas. This was entirely planned and had nothing to do with the fact that we couldn't find the birthday candles. 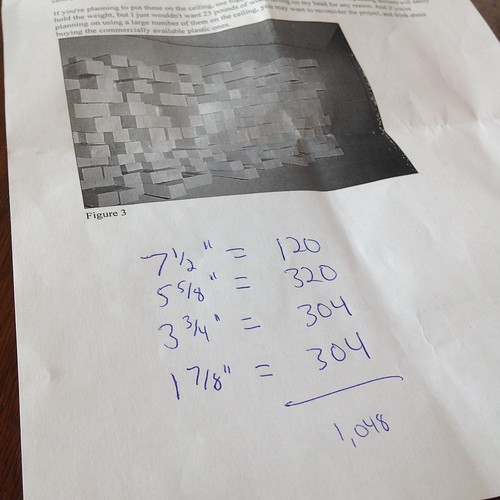 On my birthday we mapped out plans to build some QRD diffusers for the basement studio. This involved cutting 1,048 individual lengths of 2x2. 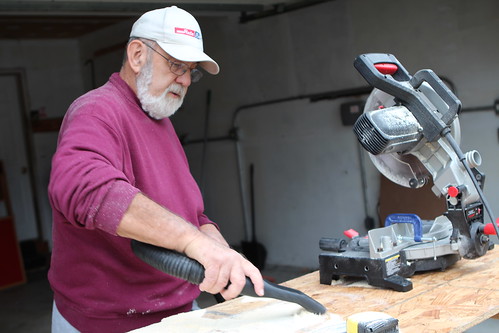 My father brought a mitre saw. I wasn't sure that was necessary until we cut our first ten pieces. That is the point I would have gone out and purchased a mitre saw had he not brought his. 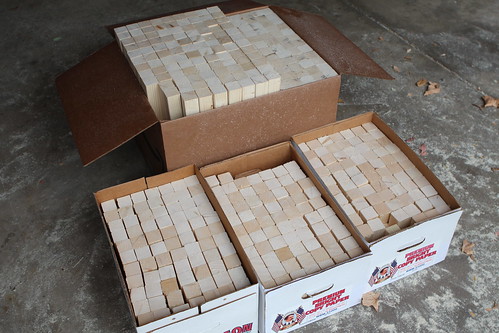 With all the wood cut now all I need to do is sand, glue, paint, and mount them to the wall. I'm thinking it should be finished by the time the boys are in college which, coincidentally is probably when I'll have the time to actually use this basement studio. 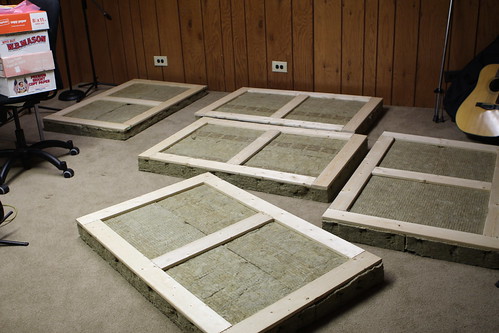 We also quickly slapped together some sound absorption panels by building some frames and mounting some rockwool insulation to them.

Maybe, some day, this studio will be finished. I'm thinking a basement studio will vastly increase the value of the house if we decide to sell.