November began with an end to Nana and Grandpa's visit, an event that was not popular with Martin or Elliott. With Nana and Grandpa gone who would watch them descend the staircase each morning? Certainly not stinky old Mummy or Daddy.

We had a nice visit then it was time to continue life as it was prior to the visit. 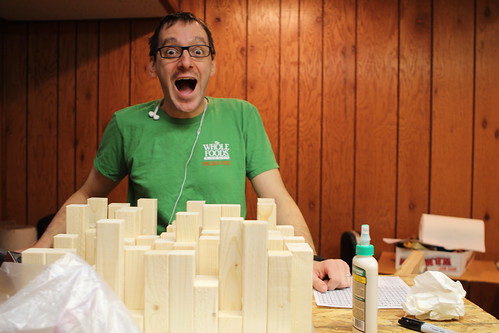 Martin's obsession with the drums has continued and possibly even intensified.

Sadly this coincided with Jen getting yet another stomach bug, our fourth of 2014. 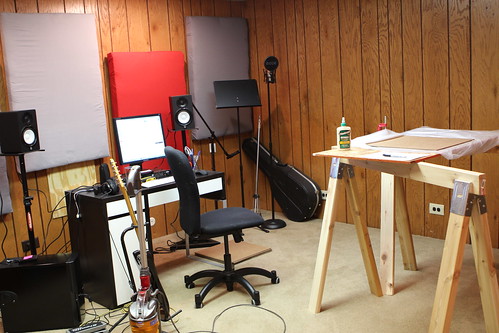 While Jen rested I got a few odds and ends done in the studio to get it ready for use. That was, until, I had my own bout of the stomach virus a few days later. Martin threw up once and was cranky for about an hour. Elliott was unscathed. Jen and I were both out of commission for a full two days.

We had our first snowfall just before Thanksgiving. They boys were much more interested in it this year. They also seem to actually think it's cold outside whereas last year they just said, "Cold! Cold!" But I don't think they actually believed it.

We had some nights in the teens and were able to get our first fire of the season going. This intrigued both of them despite the fact that Elliott refused to pose for a picture.

On Thanksgiving we made a nice breakfast of pancakes and fruit salad and, most importantly, got to lounge around in our robes and pyjamas all morning until breakfast.

On Friday we went to IKEA to buy a few things for the house, most notably their first full size beds.

The drum set that Martin has been smashing endlessly for most of the year finally became so destroyed that it had to be thrown away.

Luckily Uncle Chris had gotten us two drum sets! He was pretty upset when he found out we did not give them to them both at the same time which was his intent in buying us two drum sets. I guess he'll have to move within a thousand miles of us to better police how the toys he buys them are being used.

We even set up some of the lights and decorations in the yard which was of great interest to both of the boys.

I was able to assemble both beds in the next couple of days and Elliott took it upon himself to test them while yelling, "No more Elliotts jumping on the bed!"

Jen told them about keyboards when listening to music and they both came home excited to play keyboards of their own.

I'm a little worried that the piano that Grandma is getting them for Christmas will now confuse them.
Posted by Unknown at 3:08 PM