Shortly before Christmas we decided to announce to the world that Jen was pregnant again, this time with a girl.

Baby #3 goes by many names but Elliott prefers, predominantly, to refer to her as Uncle Dee Dee. This would be more remarkable if he hadn't started referring to just about everyone as Uncle Dee Dee. He says it with the sly smile of an unpolished stand up comic who is maybe a little too confident in the hilarity of his material.

No one knows where this Uncle Dee Dee thing came from. We asked if there was a book at day care that refers to such a character but his teachers inform us that there is not.

So it is that Uncle Dee Dee remains the figment of Elliott's imagination and a character of legend. One thing is sure if you call Elliott Uncle Dee Dee he will laugh at this ridiculous claim and respond with: "No, you're Uncle Dee Dee!"

In other news: Martin suggested the name Juno. It is just as much a mystery where Martin could possibly have learned that Juno is, in fact, a real name.

The month started off with their transition to big boy beds going fairly well. Then the true gravity of their newfound freedom set in and their feet could be heard hitting the floor seconds after we'd closed the door. One night I went in to find them both standing dangerously on their desk trying to climb the bookshelf. That's when everything was removed from their room and floor and put in the closet so that now their room is a bit more like a prison cell than a fun toddler hangout.

That is fitting because I act a lot more like a prison warden at bedtime than a fun dad.

The introduction to the world of Christmas movies has gone over quite well. Rudolph was the first hit even though the first time they watched it they actively hated it and yelled at us to turn it off. Every subsequent viewing has been more popular and the "white shaggy monster" is their favorite character in all the world of film.

Other Rankin Bass films have been similarly enjoyed though they are also quite fond of Elf which they call "the big silly man" and they even thought White Christmas and Christmas in Connecticut are enthralling, much to our joy.

While Jen went out of town I treated the boys to their first eggnog by the fire while we watched Christmas movies. They both had a similar reaction to the beverage which was to ask where this delicious treat had been all their lives.

We went to the Children's museum as well where they played a lot with bubbles.

Martin also loved the magnetic shapes. Here is a picture of a snowman that he made. This is before he added about 35 to 30 additional hats.


I took advantage of the warm temperatures to hang Christmas lights while the boys desecrated our beautiful scene by knocking Santa to the ground and beating him with sticks.

We also had fun making gingerbread houses together. They looked at all the decorations curiously and asked if they could eat it. I lied and told them that these were just decorations.

This was discovered to be a lie almost instantly and Martin soon used gumdrops to scoop up huge portions of icing that he could eat off the candies. Decorating was pretty much out the window at that point.

Then Martin fell off his chair and was hysterical for a while demanding "big water." Nothing I brought him would equal what "big water" was supposed to be in his mind. All the while Elliott calmly narrated the events in case I missed anything. "Martin fell! He's crying! He gonna hit his head and cry! Martin ate his house." His only interrupted his play-by-play to take giant bites of the gumdrop he was holding.

They also took a moment to sing beautiful renditions of their favorite Christmas song, "Frosty the Snowman."

Eventually Martin settled enough to make some ham and cheese roll ups for dinner. Elliott had no interest in making them but enjoyed eating the results. Martin did a pretty amazing job rolling them all up before we put them in the oven. 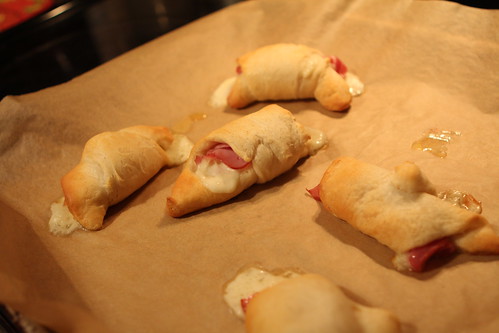 The end results were quite a bit better than I'd have expected from a two-year-old.

While I was at work Jen took them to see Santa one day. Martin tolerated it while Elliott tolerated it slightly less. When I got home from work Elliott ran up to me to excitedly declare, "I saw Santa!"

The boys also made a nice Christmas chain with Mummy to celebrate the coming of the season. They did not break the chain apart as one would expect but they did discover the joy of the advent calendar, as well as the sorrow of realizing you only get one chocolate per day.

They even helped decorate our first Christmas tree in the front room. 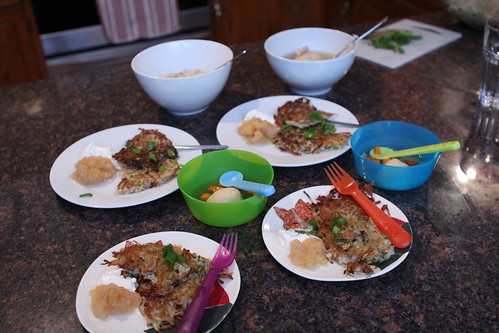 While they were recovering from illness and fever, but still in good spirits, we found time to celebrate Hanukkah with a nice dinner of latkes.

The boys broke my guitar and were banned from touching it. After that they pretty much turned anything they could find into a guitar.

They constantly strummed any small object they could find to satiate their unending hunger from the stringed instrument.

Jen had some help during her annual holiday baking this year. This means it took her three times as long to get it done and she made much less than in previous years.

Nana and Grandpa arrived before Christmas just in time to watch a lot more holiday movies with the boys who are seen here narrating the entrance of the "white shaggy monster" in Rudolp to my parents just in case they hadn't seen it in the 50 previous Christmases it has been on television. 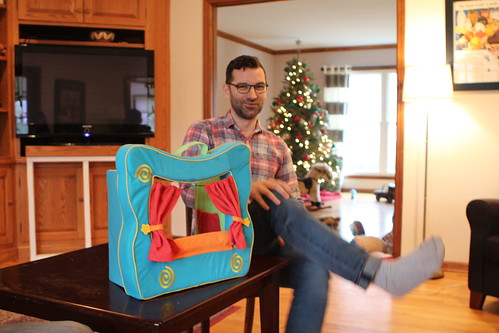 Uncle Ryan and Uncle Joe also stopped by to give the boys a present just before Christmas. 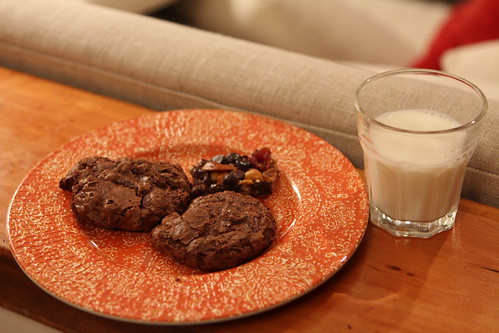 The boys picked out snacks to leave for Santa. One of the cookies was missing a bite courtesy of Elliott was stained with his tears when he was told that he couldn't eat it. 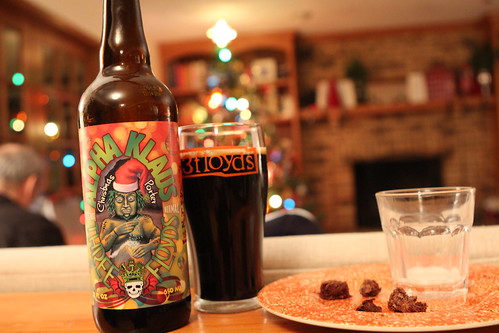 Santa enjoyed his snack so much he even polished off one of my Christmas beers. I was saving that for Christmas dinner you big fat jerk! 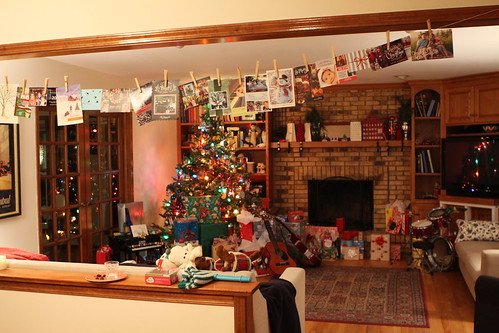 It may be possible to forgive him after all the hard work he did setting everything up for the morning.

In the morning it was hard to convince them to go downstairs after opening their stockings. They were pretty much ready to call it a day after the first gift they got out. They were like, "Oh cool! A stocking with a book in it! I'll read this now!"

Eventually we convinced them to open them fully even though Elliot slept through most of Martin opening his gifts.

Downstairs Santa had left a new drum set against the best advice from all Mummy and Daddy's friends. These friends are not as well versed in the art of muting cumbals and muffling drums as Daddy and Santa are though.

Elliott picked out his guitar right away and was pretty happy that he would no longer need to use other objects to emulate his favorite instrument.

All three children were immediately given cookies upon coming downstairs. While this is not the world's best idea it seemed to have no bad consequences. 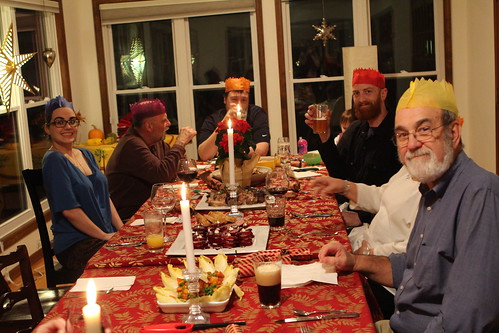 As the adults settled down for dinner the twin portion of the cousins was in no mood to sit and eat.

Instead they sat in the other room and watched Santa Claus is Coming to Town which was pretty good because it afforded Mummy and Daddy a lot more time to focus on eating their own meals rather than managing their poor table habits.

The arrival of Nana and Grandpa also meant plenty of Storybots which they read for hours on end.


They also took breaks to poke the little guy on Storybots and laugh at the sound he made.

Elliott posed for another album cover this Christmas. This is for his sophomore album, "Reflections on a Denied Cookie."

It's the follow up to last year's album, "Elliott's Soulful Christmas." While not as critically acclaimed his follow up is a bit hit with fans who admire it as a gritty musical departure from his first album.

Sadly Nana and Grandpa had to leave for Rhode Island. When the boys wake up in the morning they still ask for their grandparents. They like to stand at the top of the stairs and trumpet, "Grandpa! Nana!" For some reason it's a big favorite to have grandparents watch them as they descend as if they're teenage girls coming to meet their prom dates.

And so ends another year, but not the end of our Christmas season. That will wrap up after Epiphany. While most folks around here like to start Christmas in mid November and throw their Christmas tree on the curb on December 26th, we take a later approach and celebrate the holiday a little deeper in to the cold, dark winter when such holidays are in more dire need.

Merry Christmas and a Happy New Year! Imagine what this circus will look like in 2015 with a 50% increase in children!