The Goose is Getting Fat

As December rolls on each year, it becomes evident how much more excited hte boys are about the very prospect of Christmas. It's not surprising from their father who once began Christmas morning at 4 o'clock in the morning after receiving a fair amount of pushback from my parents.

With cooling temperatures we were able to take a final Pokemon jaunt downtown where Elliott caught a Ditto and Martin's ran away. He was not happy about this but dealt with it much better than the Arbok incident at Adler Planetarium earlier this fall where his anguish could not be healed by any means known to me.

I had a cavity replaced on the second day of the month and had to receive a triple dose of novocaine in order for the work to be done. As such my face was numb for about five hours and I had to have a milkshake for lunch. Josephine, upon getting a glimpse of the milkshake cared nothing for my pain and drank about half of it while I looked longingly upon my only available sustenance. 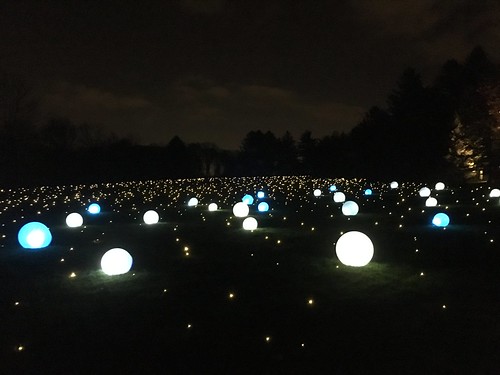 We took the kids to the Arboretum for Illuminations and it was a far better success than last year and a bit better than three years ago. We were fortunate to do it on the absolute warmest day of the month and without the precipitation present in previous years.

The next morning Jen traveled to Florida and I won the kids over with giant cookies the size of their heads.

We returned to the Arboretum but the chill in the air ended up keeping us mostly indoors to catch Pokemon in the warmth.

When I got Josephine to sleep for her nap we were able to make gingerbread houses. The boys kept their end of the bargain by being silent while I got her to sleep.

I kept my end of the bargain by letting them mostly get icing over every inch of the dining room.

After a good nap Josie was in great spirits and ready to mix it up with her brothers once again.

We got to play a bit in the basement where Martin put on an incredible performance for all of us.

Josie took to the piano instantly and whined in true eighteen-month-old fashion whenever the piano stool was not placed adequately close to the piano.

We watched Home Alone, a movie they thought was okay last year but were in hysterics during the entire movie this year. As an adult the things that Kevin does to the burglars at the end is a little disturbing but nothing was too violent to stop the peals of laughter filling our living room.

The kids got to start their advent calendars, a newfound passion for Josie. She now just stands below the shelf where they are kept looking longingly at it and muttering her best approximation of the world "calendar" over and over. 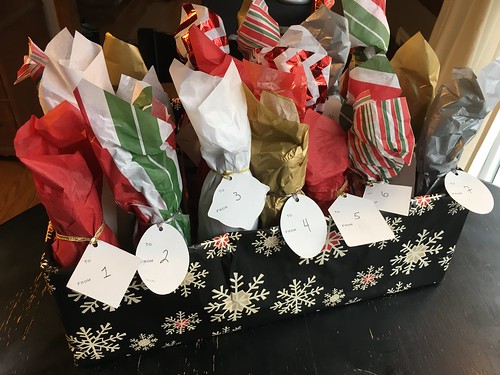 Additionally, I got a chance to start my second annual beervent calendar which Jen did a fantastic job on just as last year. 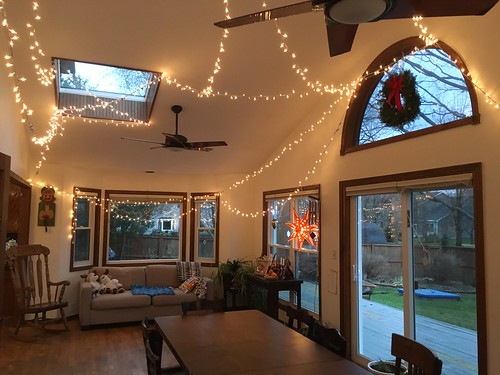 I was also able to do a pre-holiday clean, getting the house organized enough to last nearly 48 hours before being completely trashed.

We had an unexpected visit from Auntie Lauren and cousins who were able to enjoy the first fire of the year with us.

The first snowfall of the year happened conveniently while Auntie Lisa was visiting for Oliver's first birthday and, while I worked, they were able to build their first snowman who they named Pierre the Crossfit Snowman.

We also got to enjoy the first snowfall of the year on our way to daycare.

My week off work began with me taking Josie to the children's museum for the morning after which she took a three hour nap.

The next day the kids were all off school and we were able to snuggle for warmth.

The warmth dissipated quickly as we ventured out on our first trip of my vacation to cut down a Christmas tree.

Unfortunately the tree farm was a pretty big disappointment and the only thing that got cut was Elliott's hand when a cat scratched him. He declared that he wished to never, ever return to the vile tree farm as we left.

Josie did not tolerate the farm much better, kicking us with muddy boots as we tried to usher her through the rows and rows of disappointing trees. 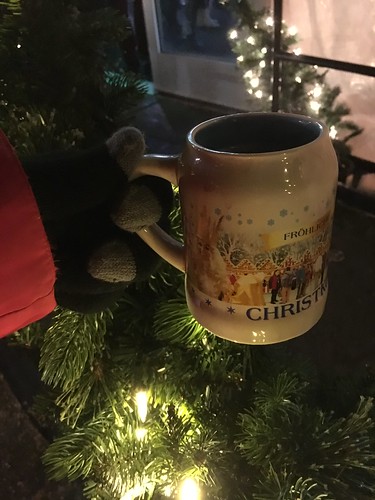 Jen and I were able to get a rare night out where we got to sip mugs of hot glühwein while braving the freezing cold of the Christkindlmarket. 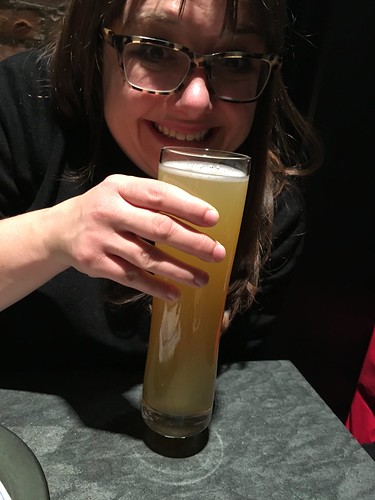 We later ventured out to the new Two Brothers location downtown and had a fantastic dinner free of children and worry.

The next day the kids decorated their mini trees by the fireplace.

They also rearranged every chair and toy they owned in order to stage the perfect recreating of Santa's sleigh.

We had about twenty-four hours of snow and I was fortunate enough to have some pretty good helpers in clearing the driveway. Unfortunately, after completing the driveway they wished to continue shoveling the lawn rather than going inside to warm up, my preferred way to close out a round of shoveling.

We also did a Christmas photo shoot with the kids after canceling the shoot we had scheduled with a pro because of the dire weather warnings we're received from our unreliable meteorologists.

We decided to brave the elements on Sunday night and took the kids out to finally get a Christmas tree in the driving snow. The kids did better on this expedition, probably because there were fewer roosters and cats to attack them. 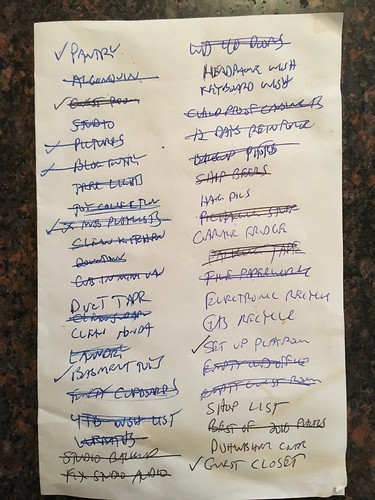 Overall the week I took off of work was highly productive. I didn't get everything on my list done, but I was pretty happy with the things that I was able to cross off.

The temperatures plunged into the negative numbers and waking the children up and to school became more of a challenge than normal, sometimes requiring extra layers during breakfast. 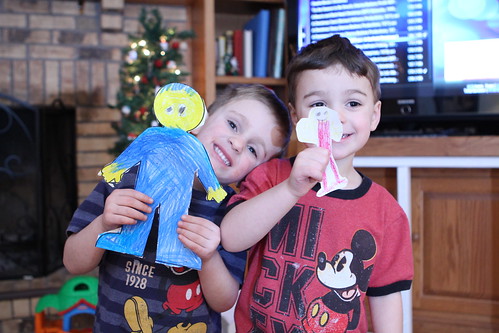 At school Elliott drew a picture of Martin and gave it to him. When we got home Martin wordlessly go the crayons and scissors and went into the other room. He came out with a picture of Elliott. Elliott was so happy that he just ran circles around the house squealing with delight. Then they posed for this picture.

If you ask Elliott he'll still say that he thinks Martin stinks. 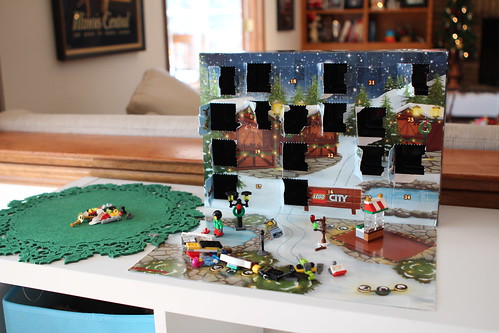 The Lego advent calendar we got the boys in Montreal has been a huge hit. They run downstairs every morning to open it up and see what they get to build for the day.

Elliott is remarkably good at building the daily items even without any instructions.

Today they had their last swim class of the session and the year which means they got to use the water slide.

It also meant that they got to get snacks from the snack machine. Normally we take them home and I make them a wonderful lunch. Sometimes we go out to a restaurant. However, the thing that they always want more than anything is to get something nasty, like Cheetos, from the snack machine in the hallway outside the pool. We never let them do it but I gave them a special treat and let them do it today and they could not have been happier.

Sadly, Jen, who had to stay at home with a very sick Josephine, did not get a chance to witness the sheer joy in her sons' hearts after this special treat.

After swim class we took the boys to see the Nutcracker. Due to an extremely rough departure we were almost late to the production. We let our hungry sons know the price for their tomfoolery was no snacks until intermission. They were not thrilled about this reality but dealt with it much better than I would have expected.

At intermission I took them out to get popcorn and they were extremely well behaved throughout the entire show. 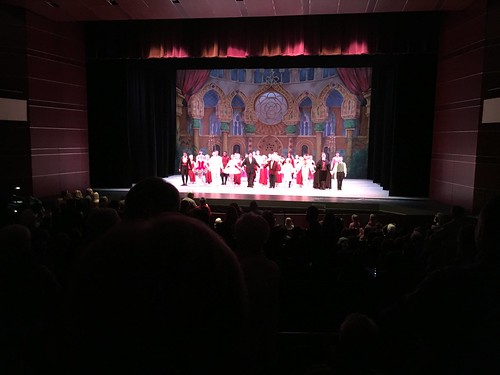 After the show Martin got to pose with several performers, including the lead. Elliott, well, he generally doesn't go for stuff like that. 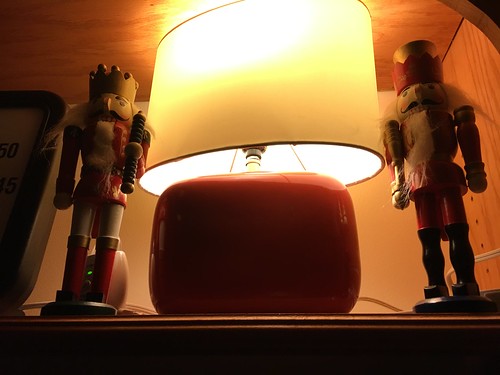 As a special surprise Grandma got them their very own nutcrackers and they put them on the shelf overlooking their beds to stand watch for the sneaky mouse king.

Martin fell asleep in under five minutes, even with Elliott intentionally trying to keep him awake. That is always the mark of a truly successful day.
Posted by Unknown at 10:01 PM