Before leaving for our trip I had ordered a few special gifts for the boys to receive upon our return.

The first was in fitting with their newfound obsession with Pokemon. It was a gross of random assorted Pokemon figurines. They're pretty tiny but were a really big hit. Much like our last trip we returned a few days before everyone had to go back to school and work and were able to enjoy a few days of relative relaxation just hanging out around the house and not having to pile into a car for multiple hour rides.

Jen made her fall fun list with the kids after the success of our summer fun list. 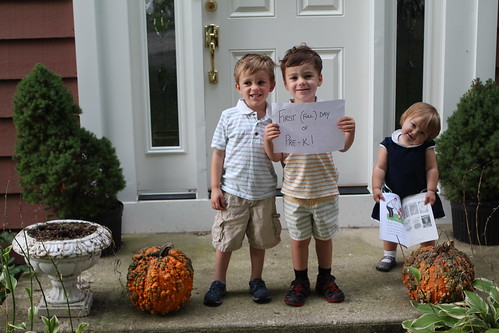 The boys had their first day of Pre-K, and Josie began her regular full day attendance. She seemed to grow accustomed to it much more quickly than her brothers had when we first moved here.

Most years we procrastinate apple picking until the trees are pretty much bare. This year we got a great jump on it and were able to pick apples in beautiful weather before the Honeycrisps were even ready. We also got to see two trees planted with seeds from Johnny Appleseed. We were advised against eating apples from the tree as they were deemed to be "kinda nasty."

Still, it's fun from a historical standpoint.

We took the kids to Aurora for the morning to get coffee and hunt Pokemon.

We also followed up with a trip to Adler Planetarium where we marveled at the beauty of space and also took part in some of the best Pokemon hunting in the Chicagoland area. Jen probably enjoyed the Pokemon hunting the most due to her intense hatred of space.

Cousin Oliver mysteriously contracted chicken pox prior to his scheduled vaccination so we had to take all the kids in for emergency boosters just to be safe.

Since getting booster shots is not the best after school treat we took them to Colonial Cafe where they just happened to have someone going around making balloon "animals" for the kids so the night ended up better than it started.

We took the kids to Geneva where we went to Island Park where they got to take advantage of a playground with an amazing rope swing. 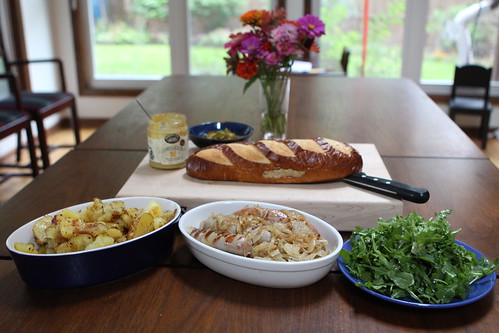 We were able to celebrate Oktoberfest with a wonderful assortment of Oktoberfest foods. I was too lazy to make spaetzle but everything else was delicious.

We waited way late into the "summer" for our first fire of the year but the kids went crazy for s'mores.

We visited the Morton Arboretum and took advantage of their beautiful fall foliage.

The boys also tried their hand at battling gyms in Pokemon Go with their mother for the first time. I think she did most of the heavy lifting in those battles but Martin's ferociousness in battle is something to be reckoned with. 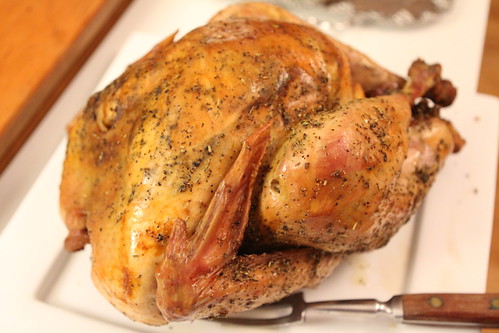 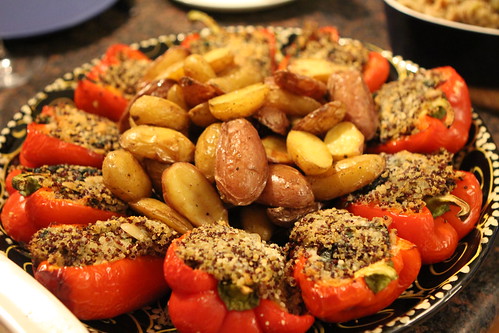 Canadian Thanksgiving rolled around and I achieved perhaps my finest roast turkey of my life. Brining for a day and then interlacing bacon slices under the skin is apparently the key to achieving success and something I look forward to duplicating again in the future. 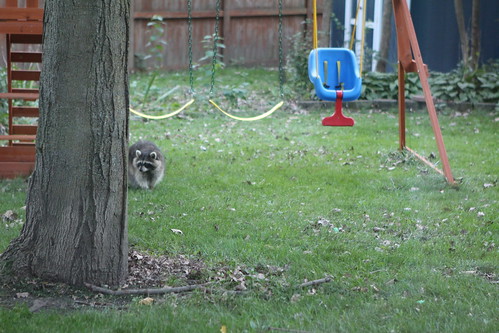 We were also visited by a hundred pound raccoon who now calls our yard home and is apparently able to scale our fence in less than a second.

We took the boys back to the planetarium by request and left Josephine with Grandma for the afternoon. While it was sad to not have her take part she doesn't get a ton out of it and it's about ten percent as hard taking just the two of them. Eighteen-month-olds do not make anything in life less complicated.

Martin's coloring obsession has reached newfound heights as he continues to color his way through any Pokemon he can think of.

We had a long awaited sleepover with Evelyn and opened up the next morning with my normal pancakes by request. That morning was ninja turtles, a brief break from random Pokemon.

We were even able to enjoy a last meal out on our fall leaf covered deck when temperatures reached the eighties one night.

Trunk or Treat came upon us and we had, by far, the best time this year. The boys have reached an age where they are infinitely more manageable and the weather was so perfect that Josie had little to fuss about, particularly with how much candy she ate.

The cousins joined along as all five children kept to a superhero theme this Halloween.

Raking this year was its normal never-ending nightmare. While I enjoy mowing the lawn far more than I thought I would as a homeowner, the act of raking leaves to me is one of the worst chores imaginable. I'm not very good at it, I hate it, and I put it off until patches of our lawn are dead.

I really do miss having a super.

Nana and Grandpa showed up before Halloween to join in on the endless coloring and preparation for the Halloween celebration.

Pumpkin carving garnered a lot more interest by the boys this year. Last year they just kind of looked at the pumpkin in passing while I did all the work with the help of Evelyn who was actually pretty interested. This year they were pumped.

Trick or Treating was also an activity that held their attention longer this year. Again, the beautiful weather certainly helped but they were all so into it.

On my birthday we took the kids downtown to the library and had lunch at a restaurant nearby which was a lot of fun. We went out the following night for dinner with my parents and had a great time.

On election day I took the boys with me to our polling place to show them how the voting worked. They seemed to think there was a lot more crawling under the tables involved than is typical a part of our nation's electoral process.

We also went to Target where the boys tried on about a dozen different bike helmets but were so well behaved about not buying everything they saw.

Then we went out for lunch in Aurora where I let them catch some Pokemon as well.

Afterward we headed to the river to search for more Pokemon.

Then we took a nice bike ride in the prairie enjoying the beautiful weather.

For dinner I made a sausage and cornbread stuffed roast pumpkin, an annual favorite that we hadn't yet gotten to this year.

For Thanksgiving we had a proper kids table for the first time in a long while and the brilliance of the kids table was reinforced by the experience. I'm sorry to tell them that they won't be joining the adults at the table for any holiday again until they're eighteen.

We had a great day after Thanksgiving just kicking around the house and ended up unexpectedly decorating the entire house for Christmas and watching Christmas movies. This is probably the earliest we've ever done this but with the kids being as into it as they were it was worth it.

We also did our second annual unplanned trip to Meijer. Completely against character we bought this animatronic Santa that sings a weird parody of Tutti Frutti with a Christmas theme and Elvis impression. They kids all love it so much it was hard to resist. They just set him off and then sit there and marvel at his magnificence.

After dinner I gave the boys their first egg nog of the year. They were hesitant at first, not really remembering it from last year. However, I think Martin's reaction after his first sip tells the tale. They were hooked and are likely going to lose their minds when January comes and we can't get any more.

I know I will.