Ah, June, a month many associate with summer fun, grilling, and sunny weather. This June, as most, starts with temperatures in the forties and is ushered in by soaking rain. We were married, seven years ago, in early June and it was 59 degrees two days before our wedding. Of course it was 96 on the day of our wedding, but the 59 degree was more typical.

As my paternity leave wrapped up we took the kids to a brand new park which they have dubbed the "jumping park" because of its cushy, springy ground made out of recycled tires. It also features an extremely dangerous rock-climbing wall which means I have to scale it behind the kids to make sure they don't fall and bounce their skulls on the soft rubber ground.

We had chicken legs one night on the grill and Martin became obsessed. When we went out to eat the next night he asked our server if they had chicken legs. Chicken wings were an adequate substitute. Also, he and Elliott were obsessed with the fact that there was a mosquito in Grandpa's water and asked to see it no fewer than twenty times over the course of the meal.

The last few mornings with Nana and Grandpa were filled with pajamas, Storybots, and puzzles with Grandpa.

Elliott helped Grandpa weed an enormous swath of garden, a task which has been the back burner so long I was pretty much ready to give up and allow the Creeping Charlie to take over our entire yard and maybe just sell our house and move. 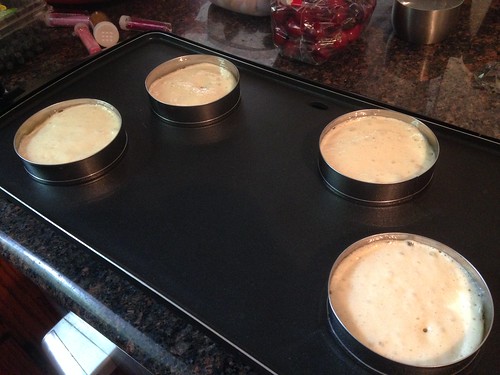 I made a batch of homemade crumpets to try to satiate the boys' crumpet obsession. They liked them okay, but even though they were ten times more delicious than storebought I think they still prefer the ones out of a package. 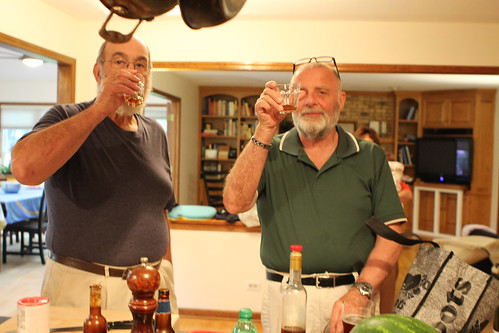 Jen lost her mind and brought out all sorts of booze for our rainy Memorial Day barbecue including some Aperitruffe, a liqueur we'd purchased at a market in Dieulefit, France. We've been slowly tricking dinner guests into taking small sips of it over the years and our fathers were the latest victims. Jen thought I was crazy for purchasing this seven years ago but it has easily earned its worth through conversation and grimaces since then.

The next night we had all the leftovers and were able to enjoy a bit more of the weather outside.

Sadly, Nana and Grandpa had to leave but they will be back soon enough for the upcoming birthday bonanza that is the three cousins' birthdays.

The nightly showering ritual has become a bare-assed nightmare with the boys running like insane lunatics around the entire second floor of our house. It's a miracle we are able to get through it each night. Well, most nights. Some nights we don't survive.

The other night, Jen left the door to the basement open and the boys' quickly picked up on this and took over my studio, trying to break the guitars of mine that they haven't yet broken. Martin desperately wanted to play a bass and Elliott quickly figured out how to equal his father in skill on the recorder.

Our friends from New York came to visit on Sunday morning and meet the baby. We had a quick brunch before they had to leave and I had to go to work.

It was a very cold day so we had to stay inside and Martin and Elliott got to attack them with their swords. Not only do the swords work as a monster deterrent but they also work as a helpful aid in greeting friends.

I love a tool with multiple uses.
Posted by Unknown at 4:20 PM