Reality is Sinking In

The last few weeks have been fun. Not particularly relaxing, but quite fun. Tomorrow I return to work full time and the true reality of having three children will slowly start to sink in. Actually, it will probably sink in rather rapidly, particularly for Jen as she is tasked with somehow balancing baby feedings with getting the Bubses ready for school.

Thankfully my parents are staying one more week as a nice buffer and that will give us a little time to get our act together.

We had a fun Daddy/Son morning where Jen took the baby for a doctor's appointment and I led an expedition with the boys to rid the yard of all potentially dangerous monsters.

The mission extended out into the street where we ran the length of our small court and made sure that no offending creatures threatened any of our defenseless neighbors.

The toy situation had gotten completely out of hand. We finally got time to go to IKEA and get some shelving to organize their toys into activity centers, just like they have at school. 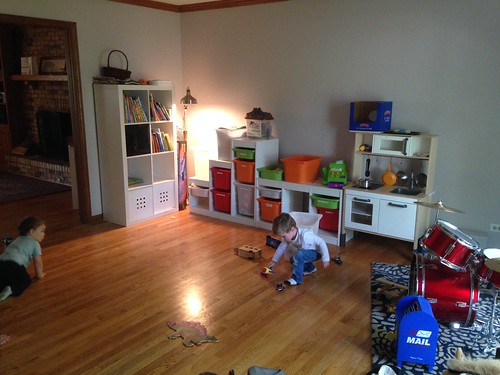 This worked far better than I could have possibly hoped. Things have been much neater and easier to find. A bonus is that the boys were incredibly excited that they now had centers at home.

Before Nana and Grandpa came we took the kids out for ice cream.

They made a horrific mess of themselves and showed their subtle differences in eating styles. Martin just inhales whatever treat he is given and makes a huge mess while Elliott is much neater and carefully savors every bite. This backfires on him, however, as Martin expects him to share with him when he has finished his dessert.

Elliott's climbing prowess has been on display since he discovered the rock wall at the park and scaled it completely unassisted. 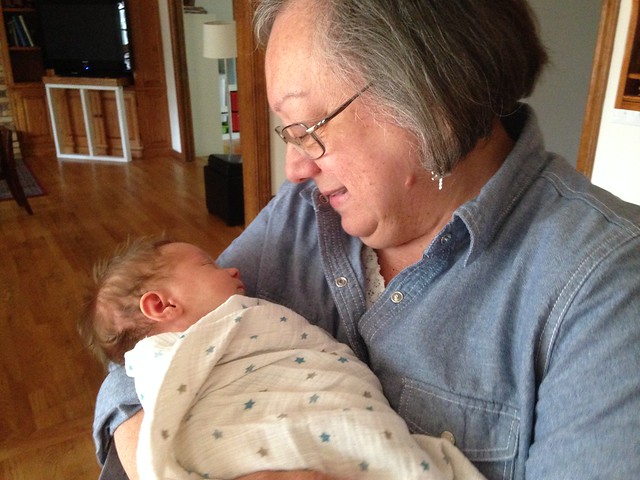 Nana and Grandpa arrived during nap time and got a chance to each snuggle the baby briefly before the Bubses awoke and spread disaster with their chaos.

Nana tended to the boys after they woke up by showing them how to paint with watercolors.

Grandpa took on the taxing job of watching Josephine.

Grandad showed them a thing or two about rocking out on the guitar.

Lately they've taken to climbing the "safety rails" on their beds and it became evident that they would both probably end up breaking a leg as they insanely climbed up and bounced along on their beds. The safety features were now more of a liability.

So we took off the rails, another milestone in their growing up. I'm happy to report there have been no cracked skulls or legs as a result.

Another milestone is that they are now both happy with taking a shower at night rather than a bath. This technically saves me a lot of time, however, I'm already looking a little forward to being able to reclaim that small amount of alone time I get each day. 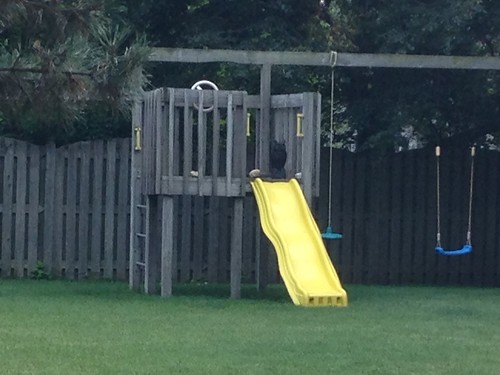 Every day we walk home from school the boys are fascinated with a small black owl who lives in one of our neighbor's back yards, perched upon a small yellow slide. Unfortunately our neighbor recently built a fence. We knew it was coming and prepared them for it. One day the fence finally appeared.


Now the daily ritual of greeting the owl has been replaced by angrily yelling at the fence and demanding that it give us our owl back.

Mother's Day saw us hosting a brunch. They boys enjoyed this immensely because it meant they got to wear their pajamas until about 3:00 in the afternoon.

After brunch Grandad took the opportunity to rock out with the boys and how them a thing or two about how to play their 3/4 scale guitars.

Then we posed all the mothers and children and tried to take a halfway decent photo of them. This is the best one I got, which is pretty pitiful.

After dinner the kids all got their swords and launched a vicious offensive against Grandpa. He was able to hold them off and, despite it being a wildly inappropriate activity right before an already late bedtime, the evening closed with little incident. 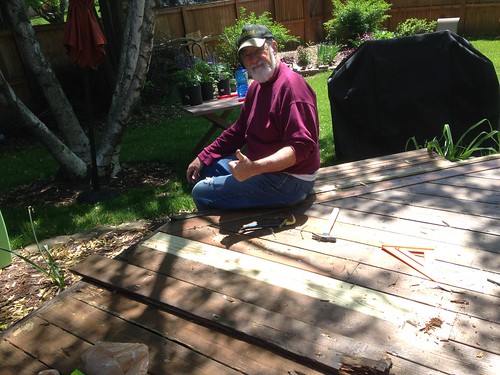 I was able to get quite a bit done in my time off. Most of all we were able to replace a lot of rotted boards on our deck in the preparation to wash it and get some weatherproof paint on it so that hopefully it will last a few more years before we have to sink some money into a replacement.

The immense satisfaction that comes with fixing or building something with your own hands will be short lived as I return to work tomorrow and any chance at free time disappears with that transition.

At least I'll always have time to relax when I shower.