July kicked off with a celebration of Canada Day.

The celebration consisted mostly of the boys wearing their Canada shirts to day care. Sadly, we didn't have time for much else.

The day before Canada day we had some pretty nasty tornadoes and 80 mile per hour winds in the area. We spend the next few days preparing our basement emergency kits. Elliott took a great deal of interest in the emergency radio which he carried around with him for the better part of a day.

In these trying times you can never be too safe. 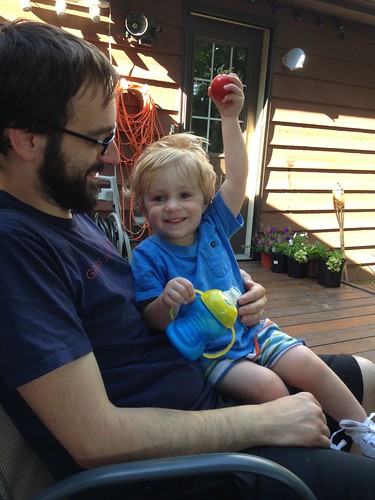 We got our first tomato from the garden which excited Martin greatly. We asked him to share it with his brother.

He did not respect our wishes. 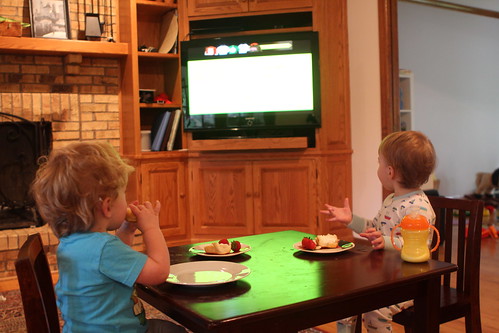 July also marks the beginning of the Tour de France and our ceremonial breakfast of biscuits with cream cheese and jam. Surprisingly the boys took more interest in the bicycles than in the delicious morning biscuits. 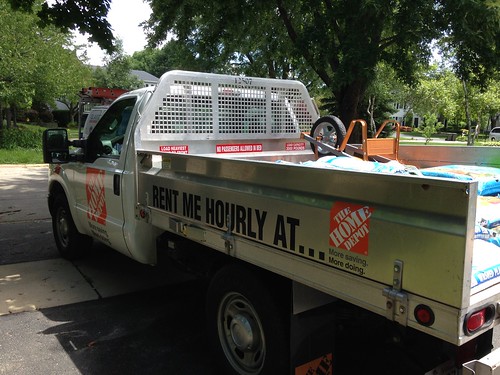 In advance of their birthday I went to Home Depot where I purchased 700 pounds of sand for their new sand box along with a wheelbarrow and about 300 pounds of garden soil. This required the rental of a Home Depot truck and several hours of heavy lifting.

On July 4th we went to Eyes to the Skies, a local celebration of hot air balloons, greasy food, and covery bands. The boys had a blast on the big school bus shuttle and checking out the various balloons.

As much as they enjoyed the balloons the highlight, strangely, was the cover band who performed a surprisingly faithful version of Kiss From a Rose.

Over the holiday weekend we also took the boys to the zoo where they got to yell at some peacocks, a wolf, a bald eagle, and some reptiles. 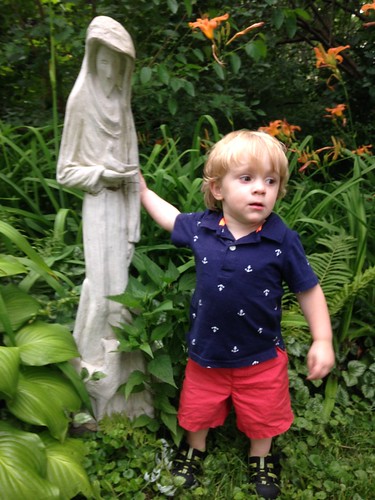 That night we went to a barbecue at some friends' house where Martin discovered a statue in the back yard.

Elliott had fun trying to blend in with the local flora and fauna.

They didn't quite grasp the concept of the beanbag game but they did enjoy it when the neighbor came by and brought them some Tonka trucks to play with.

After I left for work they had a little pool party with Jen and Grandma in the backyard. 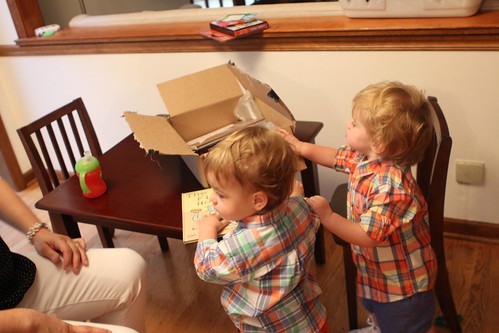 Their birthday was on Tuesday and we celebrated by opening a huge box of books in the morning.

They took some of their favorite books to day care to donate them to the school library, but not before making Miss Angie read them. 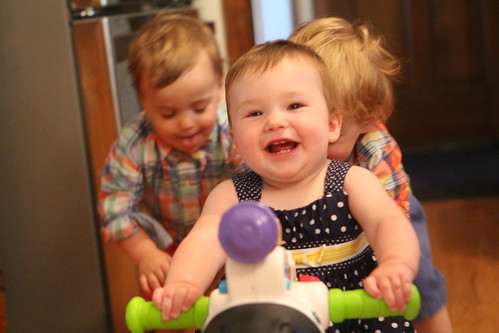 After school Evelyn came over and the birthday boys took turns, and worked together, to push her unsafely about on their learning zebra. 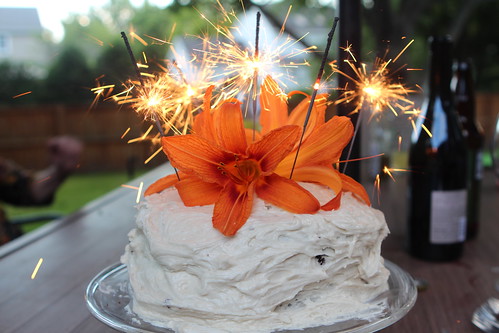 After cupcakes at school they rounded out the day with a birthday cake made my Jen. 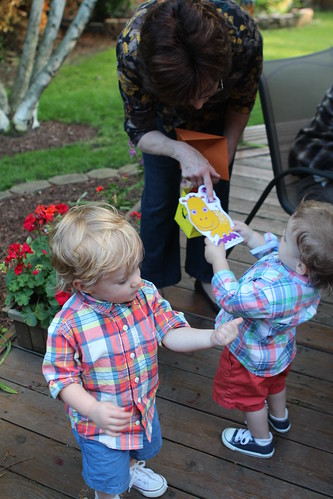 They even got some pre-birthday party presents from Grandma.


Lately they have taken some self-responsibility in putting themselves on time out when they misbehave. The problem is that they really enjoy time out. Above is a video where Martin, who hadn't actually done anything wrong, tried to pretend he was really mad and stood on time out.

He didn't do the world's best job of convincing us he was mad, however. 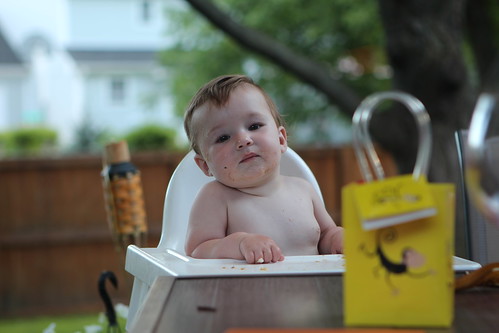 After all this Evelyn was just about ready to drop. I can relate because I slept well that night.

We attempted to let them sleep in a big boy bed for the night but this went horribly wrong and after a few minutes of shrieking and banging on the door we put them in their cribs for the night. This started the latest trend of them demanding to sleep in the other's crib. For some reason they think it's hilarious to sleep in their brothers' crib.

Later in the week we got a visit form Katherine, Sylvain, and their daughter Maya. The last time we saw them there were no children and Jen was a few weeks away from giving birth. This visit was slightly more chaotic but a heck of a lot of fun. 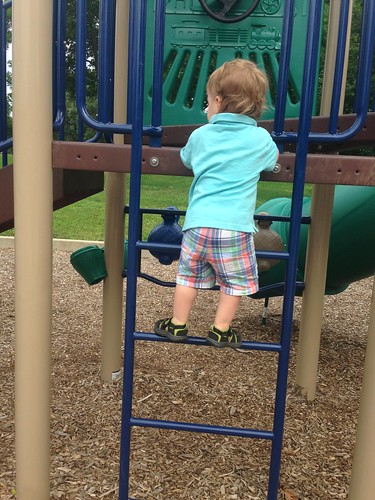 We all went to the nearby playground where Elliott figured out how to climb ladders and Martin followed a few minutes later. This severely upped the danger factor of going to the park.


Happily they quickly forgot about ladders after discovering how much fun it was to go on the slide by themselves. 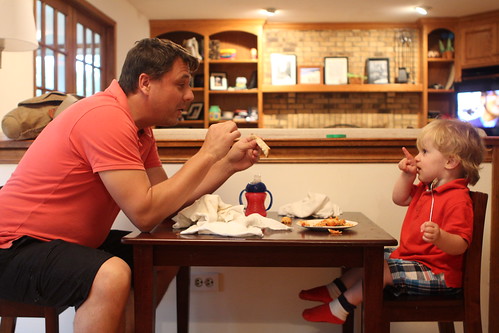 Back at home Sylvain attempted to teach Martin proper table manners. This had no effect on him as he continued to shovel pasta in his mouth by hand. Martin did find this exchange to be highly entertaining nonetheless. 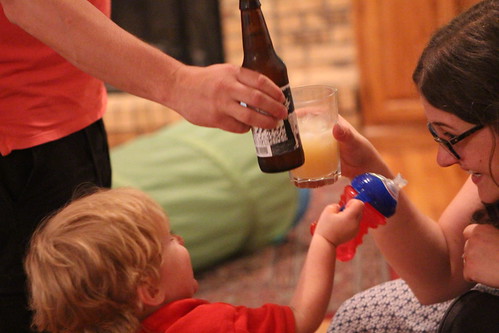 They also learned how to say, "Chin chin!" 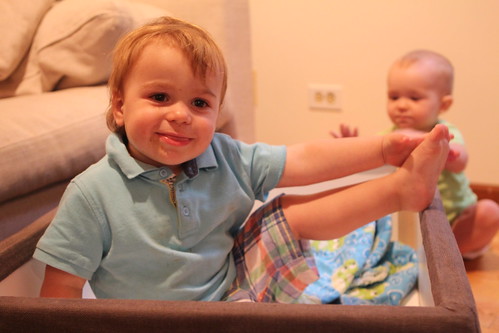 Elliott mostly avoided this, much preferring to climb in and out of the ottoman where we store our blankets. 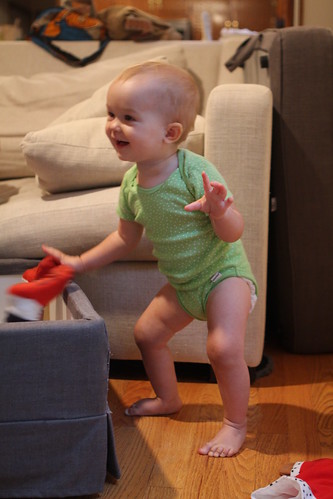 Maya also took her first attempts at standing unassisted. She would have had better success if not being occasionally bumped by a rampaging wombat. 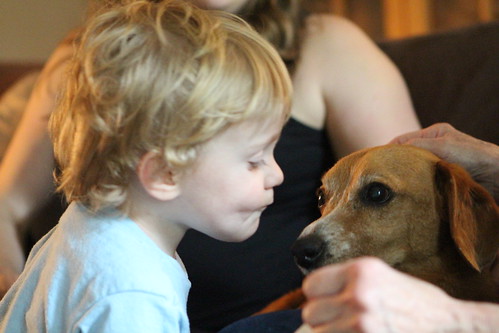 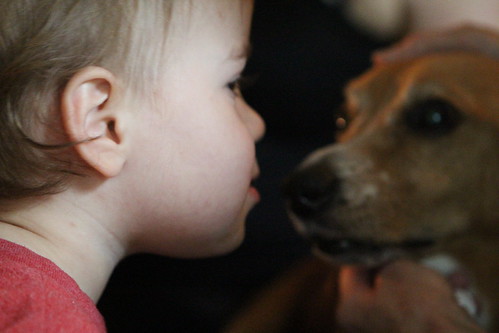 On Saturday we had a sad morning as we went to say goodbye to Pete. Pete has not been feeling well for a while and Grandma was going to take him to the vet. Martin and Elliott wanted a chance to give him some goodbye pats and kisses. 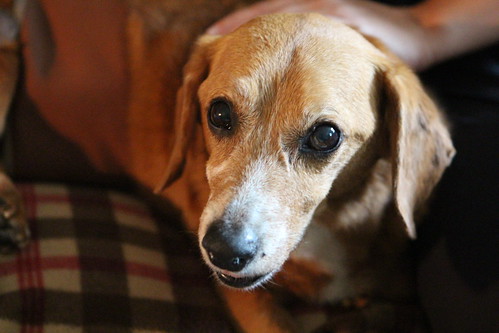 Few dogs experience the joy and pampering that Pete has experienced over the years. He will be deeply missed by all.

Later in the day Nana and Grandpa came over to give free wagon rides. 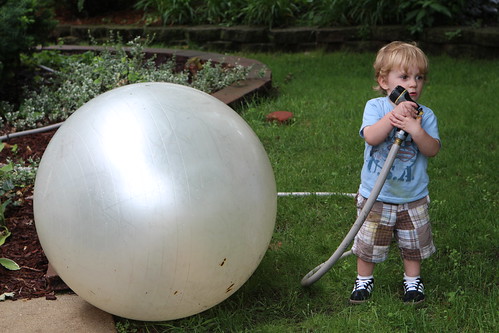 They also brought the world's largest ball with them, an instant hit. 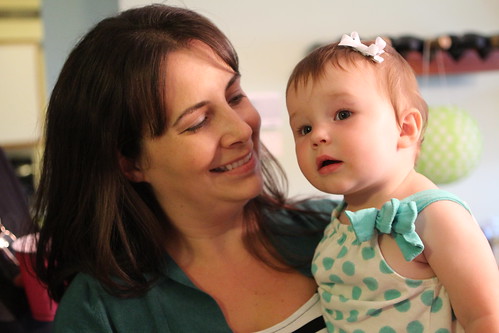 The boys worked diligently as a card inspector. They found this automated card with some sort of rotating gopher to be of extremely high quality. 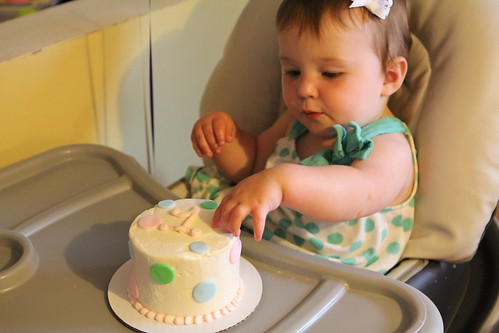 The following morning we had a great breakfast with Nana and Grandpa. 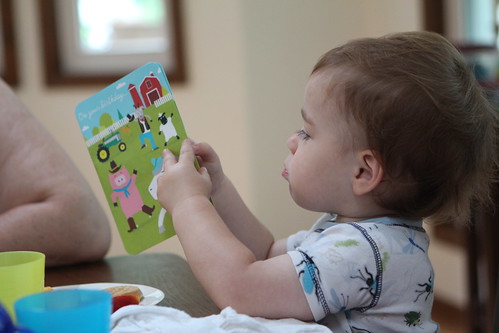 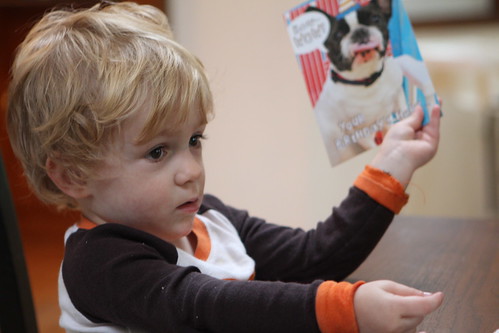 The wombats opened their own cards including a singing farm card which was almost as cool as the spinning gopher card Evelyn got. 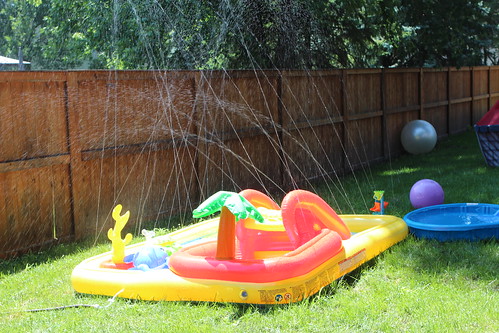 While the boys napped we worked diligently to turn the backyard into a makeshift water park. 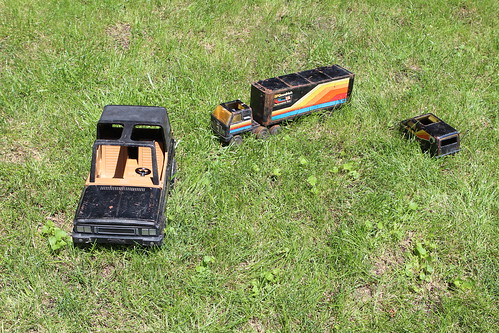 My parents also brought my old Tonka trucks. They're a little rusted and broken but after our experience the previous weekend we were sure that they would be just fine with that.

They boys got a lot of books for their birthday including personalized alphabet books that Nana drew for them.

The sandbox was also an instant hit which is good because after the back-breaking labor associated with assembly and transport of sand I think I would have forced them to play in against their will if they weren't interested.

All in all it was a very successful, and busy, beginning to July. We've received a second polar vortex so in the past few days the temperature hasn't even gotten into the 70s. As far as I'm concerned this has been a fantastic development. Needing to wear pants and hoodie in July is something I am not opposed to.

It makes pool parties difficult but mowing the lawn is a treat.
Posted by Unknown at 12:51 PM