Last Monday the boys were in the midst of recovering from ear infections and stomach viruses simultaneously. 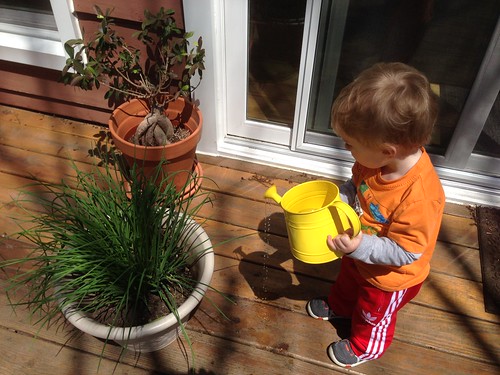 Martin spent the morning and afternoon with me where we played outside, watered plants and even got to watch our neighbors cut down a tree.

Even after a monster morning nap, Martin was still ready for an afternoon nap with me. 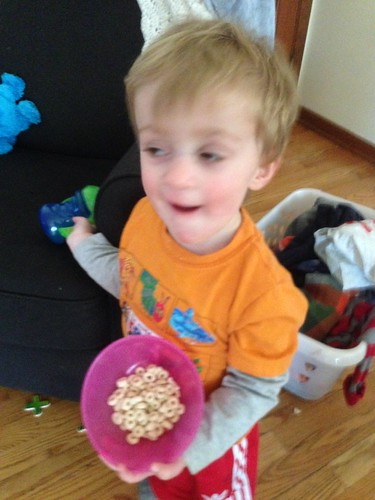 After getting the call that Elliott needed to be picked up as well, I pretty much put all rules on hold in a mini toddler version of The Purges. Martin took advantage of walking around with a full bowl of cereal.

Elliott took advantage of just standing there watching "Monkey George" for upwards of an hour. 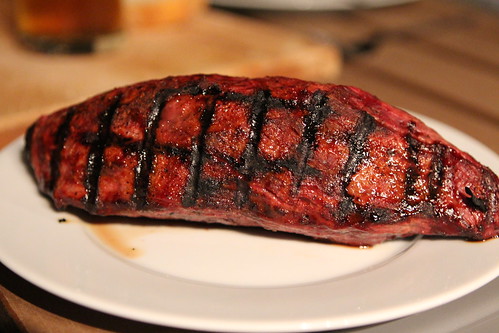 After a few more days of recovery, as well as a return of some very nice weather, I took advantage of grilling up some teres major. 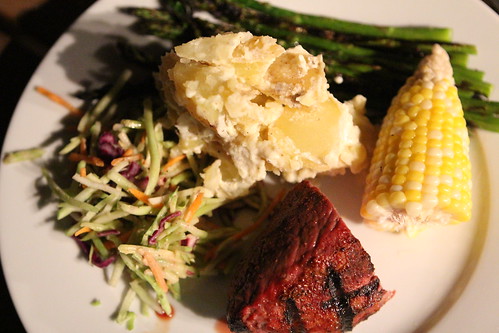 We ate outside after the boys stopped their bedtime fight which meant dinner at about 9:00 PM and eating in extremely low light underneath the one functioning light on our deck, right by the bird nest over our grill. 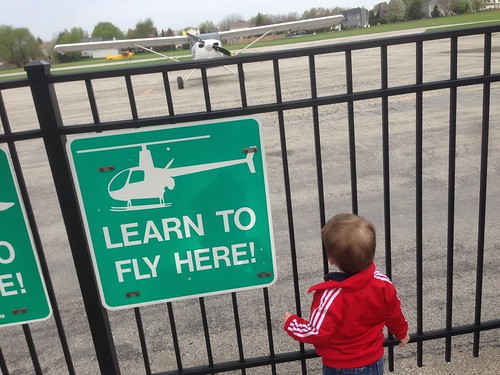 On Saturday we took the boys to Clow International Airport where they got to watch (and more importantly, identify) a large number of planes. Elliott could not keep his eyes off the planes and breakfast went largely uneaten. 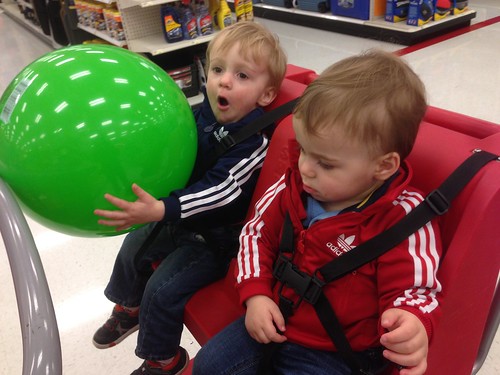 After breakfast we stopped by Target to pick up a prescription and also a couple of balls for the back yard.

In the early afternoon, before lunch, we met Grandma at the garden store where we picked out a large number of plants. Martin also took it upon himself to pick out a number of small stone owls which we had to own and Jen created a mythology about their oddly varying sizes and how they represent each of us.

After this we were pretty exhausted. Sadly I had to then go in to work late instead of doing what I wanted to do which was sleep for the rest of the day. 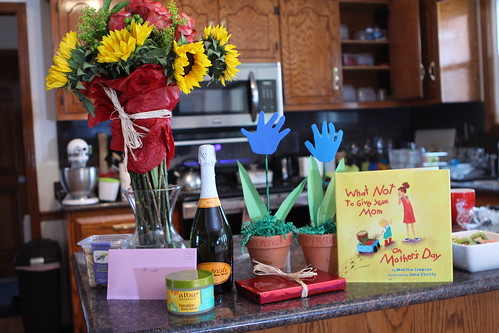 Mother's Day started with the boys sleeping in until past 6:30 AM which was the latest either of us has slept in a while. It feels so decadent to sleep past 6:00 AM. Who does that? 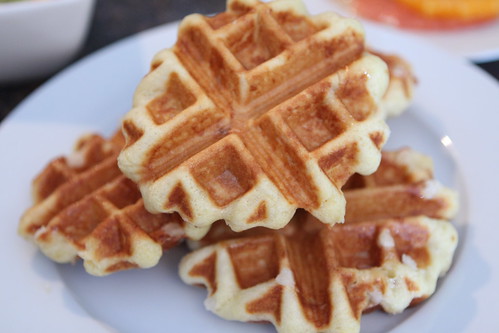 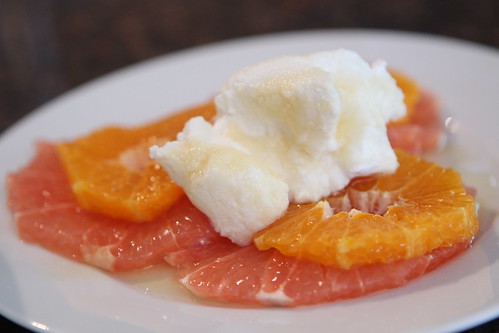 For breakfast I tested out a new recipe for Liege sugar waffles which I served with sliced citrus, ricotta, and honey. The recipe was a huge success. We can now relive our Sunday mornings in New York where we enjoyed similar waffled cooked by a self-proclaimed "culinary chef" and a Nate-proclaimed "culinary douchebag."

In the afternoon it rained and the boys were not going to settle for anything less than a front seat to watch that. This is high entertainment for these guys. 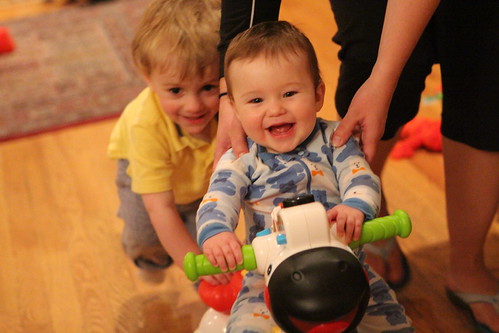 Cousin Evelyn came over for dinner (with assorted other guests) and had the time of her life being pushed around by her big cousins in the zebra. 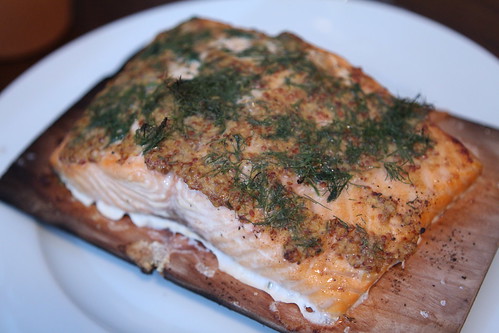 For dinner we had mustard dill plan salmon. 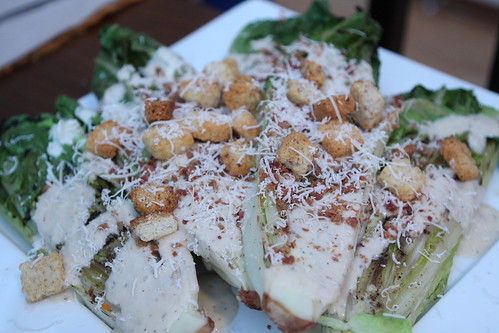 Also, this grilled Caesar salad, along with a non-grilled version so that Jen's mother wouldn't be given nightmares by the dream-inducing grill. 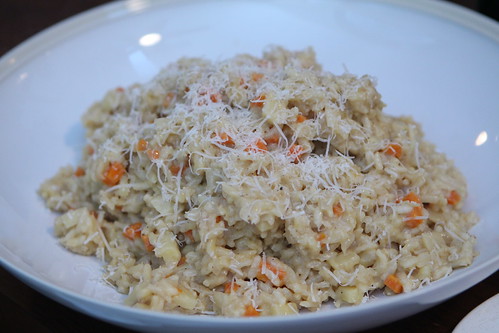 I also made a carrot parsnip risotto with Fontina and Parmigiano-Reggiano. 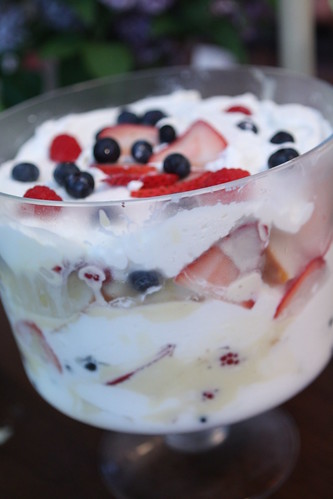 Last night Martin decided to take his walking and eating game to the next level and tried to walk around with a ceramic adult-sized plate and spoon, eating his risotto.

One of these days he is going to need to be stopped. 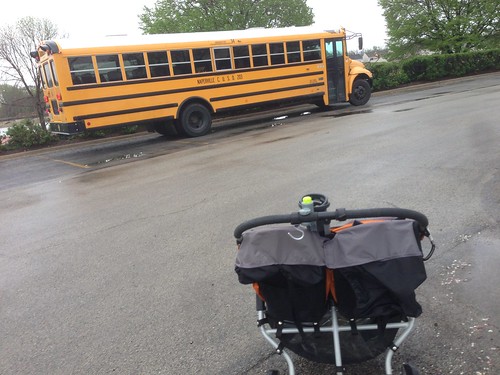 This morning we had to go to the doctor to get their ears checked for the third time since developing these ear infections. Beforehand I promised to show them a school bus that I was not able to show them last week as it took off just as we were starting to approach it.

There are few things on this planet that get them as excited as a big, yellow bus.

Elliott's infection has healed completely but Martin's is still there but just barely. They'll need nose spray until June then, hopefully, we can close out this chapter in our ear infection journey and move on to greater things.

If not it will be a race to see what implodes first, their ear drums or our bank accounts.
Posted by Unknown at 3:48 PM