Another Day, Another Antibiotic

After the holidays died down we were keen to get the grill fired up and have our first burger event of the year.

This was fairly successful though the guys are not really too keen on meat these days.

Elliott, however, was quite impressed with the ketchup.

After dinner I came around the corner and saw Elliott sitting in a pile of cookies that he had apparently knocked off the counter. The interesting thing was that he was not trying to eat them, he was just sort of rolling around and kicking at them like a cat enjoying catnip. 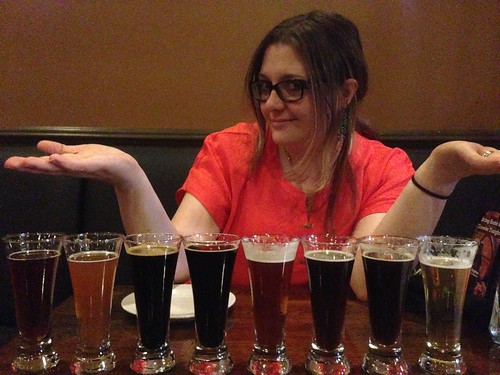 Two Fridays ago we were afforded the opportunity to go out for dinner. We picked a restaurant based on the beer and the ability to watch the Blackhawks. While we had to peer into the next dining room to see the game while someone played Bob Marley songs on the guitar, the "three ounce" beer tasters were poured quite generously.

The following day the guys both decided to wake up about 15 minutes after I got home from work and spent the next six hours in bed with us allowing us little to no sleep.

The day after that Jen and Lauren took the cousins out to get their photos taken. Some cousins were more into it than others. Can you figure out which cousin was a little less into it? 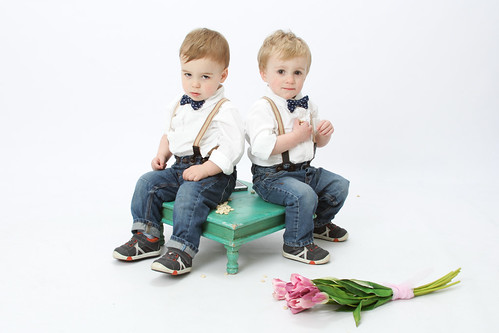 Can you tell which cousin would have rather been doing anything else?

Can you tell which cousin maybe wanted to punch the photographer in the crotch and make a break for it?

Can you tell which cousin may have secretly been plotting to murder his mother and auntie in their sleep?

Can you tell which cousin may look into your soul and cast darkness upon your very being?


This was all forgotten later that night when he met us all at Grandma and Grandad's where he got to eat copious amounts of corn on the cob. 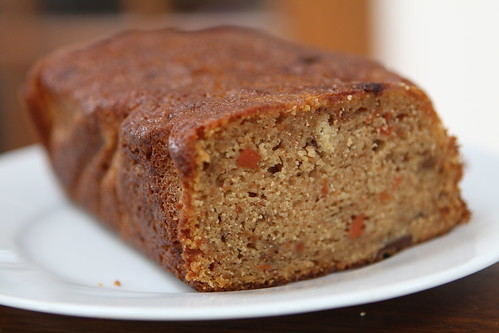 Right after Passover/Easter weekend I had an alarming amount of carrot and parsnip tzimmes left. I decided to mash it up and turn it into a delicious carrot and parsnip bread with sour cherries. The result was quite nice. I highly recommend for any excess tzimmes you may have around.

I know this is a common problem for a lot of people.


One morning when Jen "accidentally" woke up Elliott he had to come and stay with me. We tried to call Nana and Grandpa on FaceTime (one of his favorite things to do) but unfortunately they were not available. Instead he spent much of the morning just talking about how awesome it would have been.

I took them in to the doctor on Friday after completing their second ten-day round of antibiotics for a check up. Martin requested a tissue and then used it to clean the doctor's chair, desk, and door.

Elliott grabbed the keys right out of my pocket and tried to use them to open the doctor's locked cabinets. Elliott has never really used my keys before for anything so it was a little surprising that he was interested in them, now where they were, and seems to have a good idea of how to use them.

The result of the appointment was that they both still have ear infections. This meant we had to go to Walgreens and pick up another $150 worth of prescriptions for them. It also meant that our stupid, terrible, awful, no good, very bad heath care provider had to one again be confounded by the fact that we have twins and not be able to fill our prescription without an hour's worth of phone calls.

I won't tell you who it is but it rhymes with Boo-nited Elfcare.

We can't exactly blame them. After all, they are the only twins in America.

One night, waiting for Mummy to return from work I decided to do an Animal Sound Identification Lightning Round. They scored quite well.


Over the weekend, tired of all the kids music channels, I decided to play the Empire Strikes Back soundtrack. Elliott was particularly impressed. Martin's reaction was also great but I was unable to get it on video.

On Sunday we went to a local farm festival where the boys had a pretty good time playing around. Elliott was a big fan of this area where he pretended to be a giant who was ransacking a tiny village. He was particularly ruthless with the scarecrow.

Elliott has long been a defender of crows.

Martin became extraordinarily hungry towards the end of the trip and the sample portions of pie only fueled his anger at not being able to eat everything he wanted. We were foolish in not bringing any snacks with us even though we were a mere five minutes from home.


Elliott also enjoyed shaking the hell out of this wind chime. Elliott deemed it not nearly windy enough and rebranded this item as a shake chime. 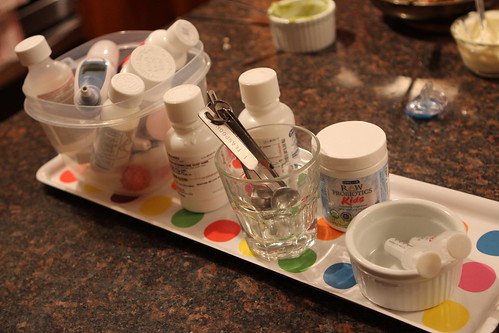 This latest antibiotic, or perhaps a cumulative effect from all three, has left their poor little intestinal tracts in bad shape. This has meant for an average of 4-6 diaper changes before lunch time and recently expanded to vomiting. The doctor supposes that in their weakened state they may have contracted a stomach virus. The fact that Grandma is also in that camp without any antibiotics would lend support to this theory.

They've been on antibiotics for 25 of the last 30 days. This leads me to wonder if the cure is worse than the sickness. I'm pretty sure that they'd be better off just letting these ear infections work themselves out after what they've been through. 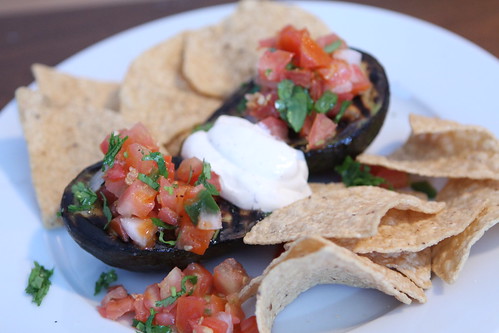 Illness be damned! After we got them to sleep last night we proceeded onward with our Cinqo de Mayo dinner. I started by grilling some avocado in the skin then topping them with salsa and cumin-spiced sour cream. This made for a pretty tasty end to a rough day for all of us. 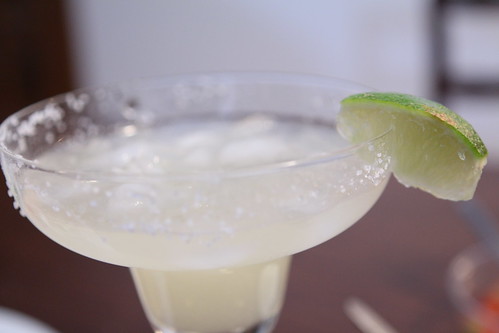 Jen, before knowing the boys were sick, had requested a margarita. I was still able to deliver but it was consumed with less joy and more tired resignation than originally planned. 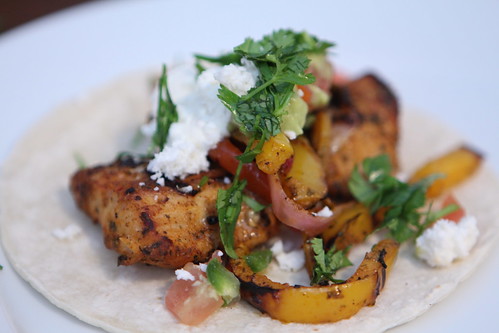 I also grilled up some seasoned Mahi Mahi and vegetables and made these tacos on corn tortillas with cilantro, spiced sour cream, salsa, guacamole, and crumbled cotija. 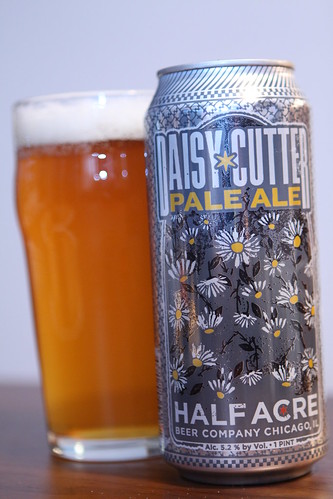 Never one to pass up a good beer opportunity, I enjoyed this Daisy Cutter Pale Ale from Half Acre. It was very tasty and I'd highly recommend as an accompaniment to tacos. 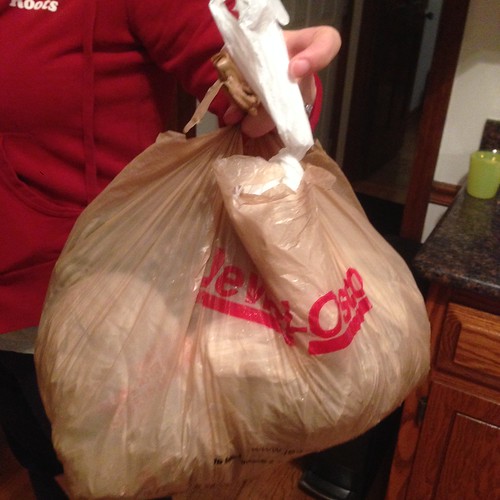 After dinner Jen bravely volunteered to open the bag of unspeakable horror that was sent home with the boys from day care.

Because of their illness they soiled every bit of clothing they had and we had to walk home with Martin wearing no pants and Elliott with no shoes. This left Jen up late Googling solutions for barf-stained shoes.

After his sickness we had to keep Martin home from school this morning where he drank some juice out of a cup then immediately passed out on top of me about two minutes after his mother left for work.

I transferred him to the couch where he has been sleeping for more than two hours. I'm hoping that a combination of sleep, a bland diet, and a lot of liquids makes him better for tomorrow.

Otherwise either Jen, I or both of us may be fired.
Posted by Unknown at 12:15 PM