This gave Jen the opportunity to create these beautiful breakfast trays out of Morning O's for the boys. 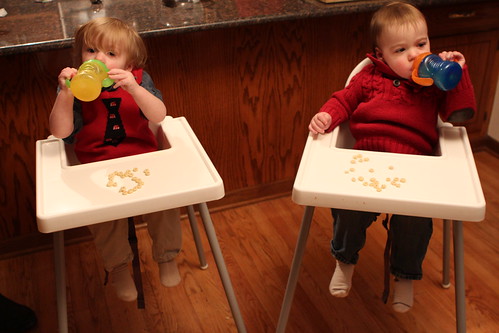 It also gave the boys the opportunity to slouch in their chairs and drink from their sippy cups, unimpressed with her efforts. That night I planned an unconventional dinner by making beer can chicken using what may be the finest beer ever used for the dish: Surly Brewing Furious. The dinner I created was a replica of what we used to order from Dallas BBQ, the BBQ restaurant near our apartment when we lived in Manhattan. This was an effort to create our first ever Valentine's Day in New York where we ordered take out in a failed attempt to do something more meaningful. We also came across a documentary about Russian mail order brides on cable called In the Name of Love and ended up watching it. While, at the time, we recognized how horrible the day was, it may have been the most memorable Valentine's Day we've ever shared.

Jen corrected me later to say that she believes we actually got take out from Coganelli's, the Italian menu at the local Irish pub, Coogan's. I can neither confirm nor deny this. Had I know I would have made some shoddy rotelle with Italian sausage.

Saturday morning began with a rousing new activity called "The Bag Game." This involves removing all the plastic bags under the counter, packing them into a cardboard box, then stuffing them back under the counter.

In the later morning we visited some friends in town who recently had twin sons to give them a haunting glimpse of what their life will be like in a couple of years. Except for that they already have a daughter so it will be like what we showed them but more complicated. Elliott enjoyed the room full of new toys to play with.


We returned home and Martin did his best to identify as many animals as possible before their nap.


We had to wake them up from their nap so that we could take them out for a much needed haircut. Much needed by Martin, anyway. Elliott just got a show cut. A show cut that cost the same as his brother. Jen told me that there was a place called "Jungle Cuts" in town to take them and asked me to look up directions. I put "jungle cuts" in Google Maps and this was the first thing that came up. It was an impressive showing of how well-tweaked their algorithms are.

I will not show you any pictures of the horrors that took place inside that building. Elliott's haircut lasted about two minutes but Martin's lasted about ten minutes and, for unknown reasons, he was freaking out the entire time. Elliott had a blast playing on the indoor slide, going down all by himself, oblivious to the screams of his brother in the other room. After their haircuts they demanded bananas, which seems to be the only food they have any interest in eating lately. They demand it for breakfast, lunch, and dinner but we only give it to them sometimes as we're pretty sure that there would be some nutrients missing in their diet if it was their only form of sustenance. On Sunday, after a slight snowfall, I shoveled (again) in anticipation of a sizable storm the following Monday. The boys even got out to help by pushing the shovel around. I appreciated the help though I think if they had loadlifters it may have come in a little more handy. The afternoon and morning on Sunday were spent being occasionally startled by the crashing of icicles falling from the roof onto our skylights. Luckily the glass stayed intact, though I'm not entirely sure how. On Monday, due to a series of emergencies, Evelyn ended up spending the morning with us while Jen worked and I entertained her with blocks, toys, and the Winter Olympics.

After a full morning and feeding I put her to bed. Since we didn't have anywhere for her to sleep I put her in the little dog bed that the boys got for Christmas and have yet to play with even though they loved the one at their Grandparents' house.

She loved being in the bed though I don't recommend taking pictures of your niece in a dog bed then posting them on a blog that her mother reads. That's sure to be ill advised. We had a moment to skip out for lunch on President's Day as the boys were at day care and the snow began to whip up into Blizzard-like conditions. We had a rich lunch, drinks, and watched Olympic hockey at a restaurant downtown. While we felt pretty crappy from a poor night's sleep the night before and the heavy lunch it was totally worth it. Meals without rampaging wombats are few and far between these days.

Then it was back home to shovel the six or seven inches of snow that seemed to fall in a matter of just a few hours.

After a quick dinner Jen read the boys their bedtime stories and we got them to bed.

The bedtime horrors have slowly, but steadily, declined over the last month. Slowly but surely they have required a little less attention and sometimes go to sleep with no fuss at all. It's all about catching them at exactly the right moment and not upsetting the delicate balance.

Never upset the delicate balance.
Posted by Unknown at 4:08 PM